So if you didn’t know already Sirusho, the very talented Armenian singer, has her own ethnic Armenian jewelry line “PreGomesh” named after her hit song by the same name which recently has passed 6 million views on YouTube (see HERE).

Ever since she released her PreGomesh video I’ve been a huge admirer of her traditional Armenian yet very modern and tasteful style. So recently when my sister gave birth to a beautiful baby boy Hayk, I’ve decided to surprise her with a set of jewelry items that I’ve ordered from PreGomesh website. As such I’d like to review my experience with the purchase and the items themselves.

But first I’d like to clarify that this is not an advertisement of any sorts. It’s my honest personal opinion and experience with the jewelry I bought from PreGomesh.

I might not be an expert on jewelry but I am a staunch admirer of arts and crafts as you might already know from my previous posts. Moreover, I’m a fairly critical consumer who knows a thing or two about marketing and shopping on the internet. Thus let us review a few things.

One of the most important things in sales and marketing is the buyer experience. Steve Jobs once famously said:

“You’ve got to start with the customer experience and work back to the technology – not the other way around.”

Now jewelry isn’t computer tech but the statement does very much apply for any webshop out there. So what’s my experience with buying from PreGomesh? Well since this is the first time I ever bought something from that website my experience is quite limited as it’s based upon a single encounter, but has overall been quite positive.

During the purchase my main concern was the speed of delivery. I was about to visit relatives abroad and wanted the items to arrive on time before I left. So I’ve ordered the speedy delivery service with PayPal (which I find a very convenient method of buying online) and to my delightful surprise the items were dropped off just 3 days later. Delivered with FedEx straight from Yerevan to my doorstep.

So by now you might ask what did I buy and how I experienced the product?

I’ve ordered a set from the “Karin” line; a bracelet, ring and earrings crafted in the style of the old Armenian city Karin (later known as Erzurum). For more on Karin click on the etymology spoiler bellow.

Etymology of Erzurum
The city of Erzurum was founded by the Armenian royal dynasty. In ancient times, Erzurum existed under the Armenian name of Karin. During the reigns of the Artaxiad and Arsacid kings of Armenia, Karin served as the capital of the eponymous canton of Karin, mentioned in Strabo’s Geography (12.3) as a large district Carana. After the partition of Armenia between the Eastern Roman Empire and Sassanid Persia in 387 AD, the city passed into the hands of the Romans. They renamed it to Theodosiopolis. Later somewhere in the 11th century, when the Seljuk Turks invaded the region and occupied the Armenian city of Arzek, its Christian inhabitants fled to Theodosiopolis and renamed it to Arze-el-Rum contracted into Arzerum and Erzrum, in honor of their former abode (which from its long subjection to the Romans had received the epithet of Rúm). 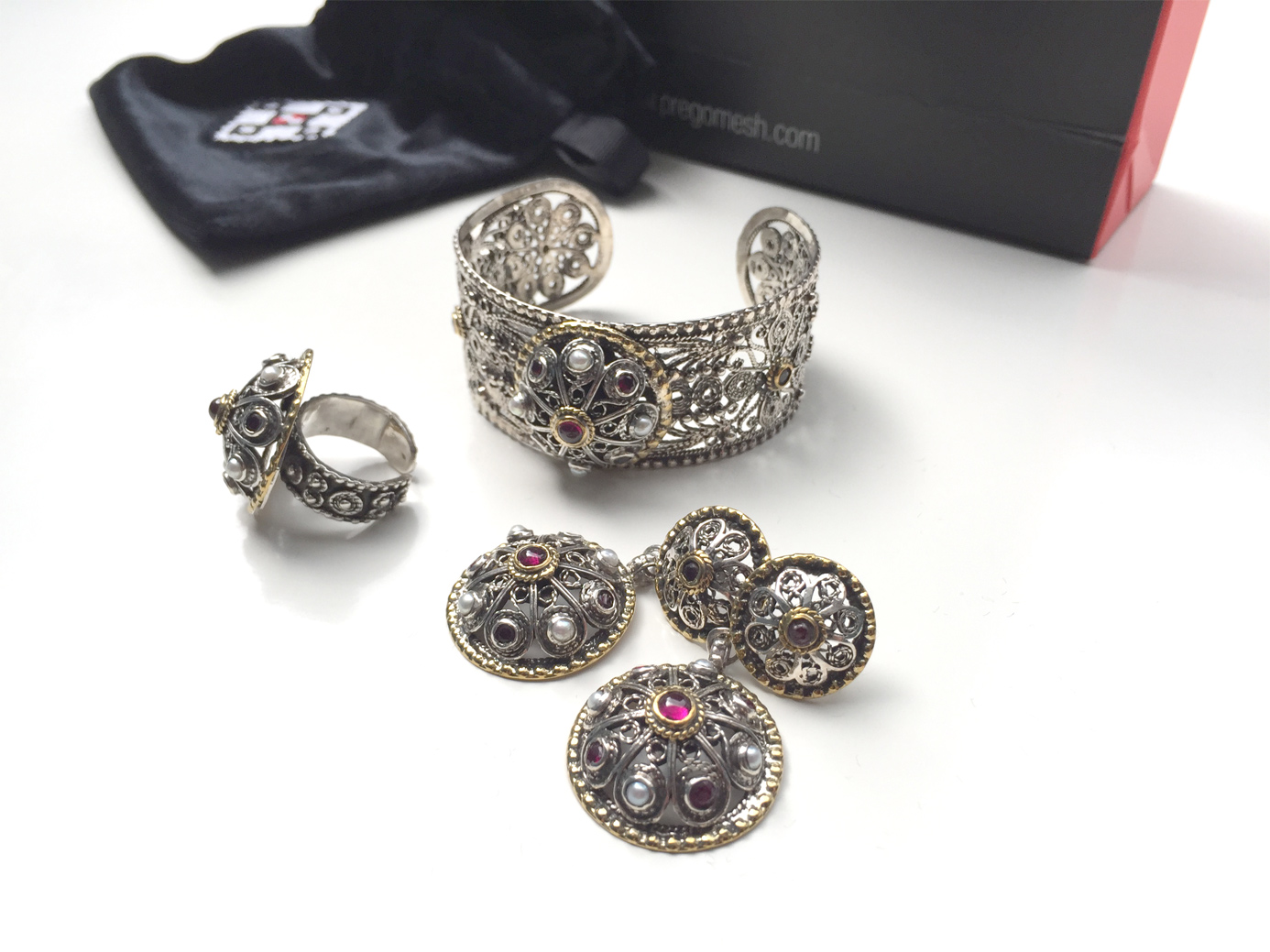 All of the pieces are exquisite hand crafted jewelry set in Silver with Gold plated details. And my sister absolutely adores them. They look classy as well as traditional, but what I like the most is that these intricate patterns were clearly manufactured by hand and with great craftsmanship. The design is simply magnificent, stones with red and white color are beautifully placed among the precocious silver metal with gold plating. 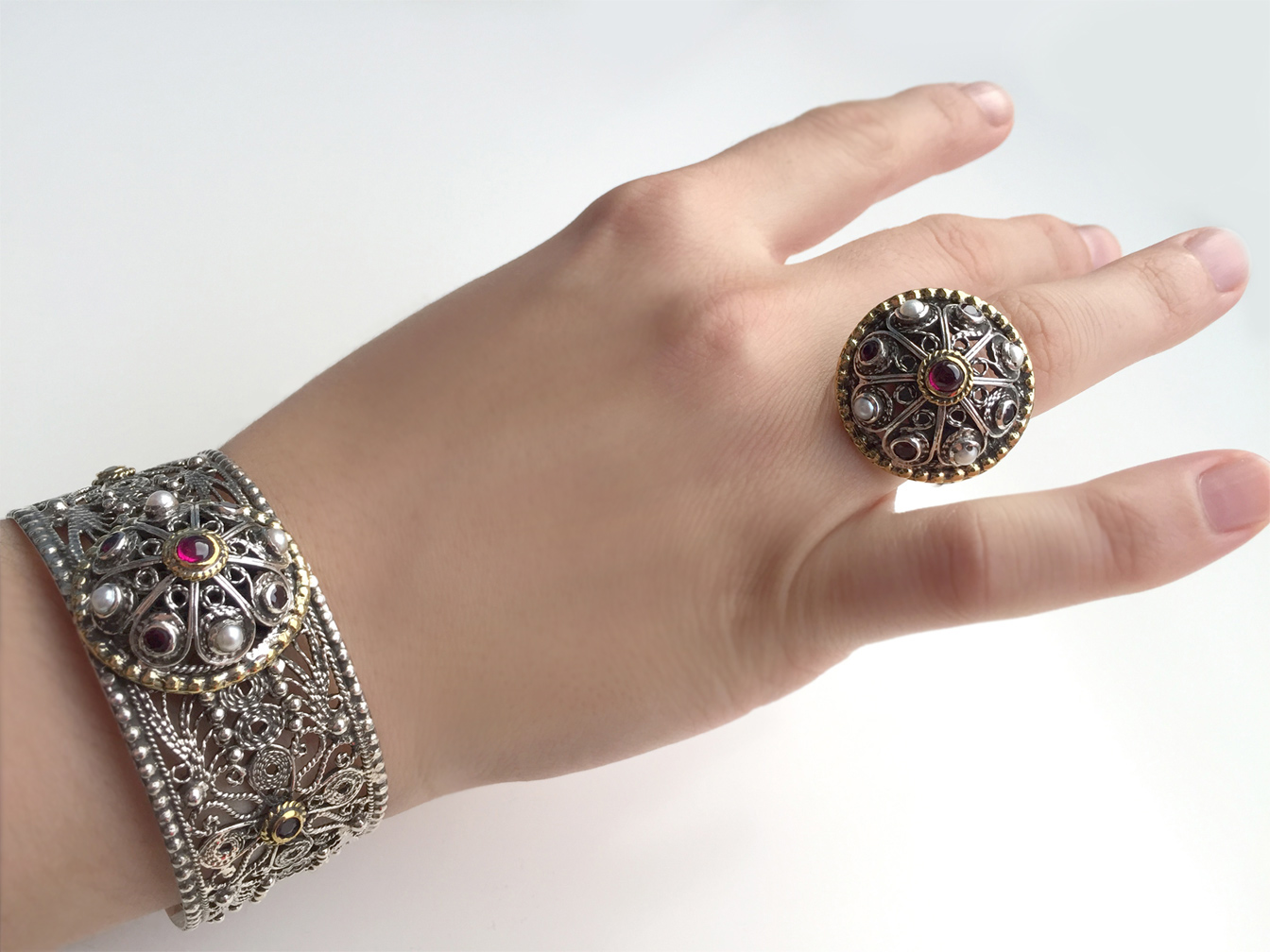 The packaging is really interesting. The items that I’ve received came in a small black velvet bag with the logo of PreGomesh, which is a traditional Armenian carpet design, embroidered on it. It’s certainly fitting the design of the jewelry. Furthermore the entire package comes in a stylish PreGomesh paper bag as seen in the picture bellow. 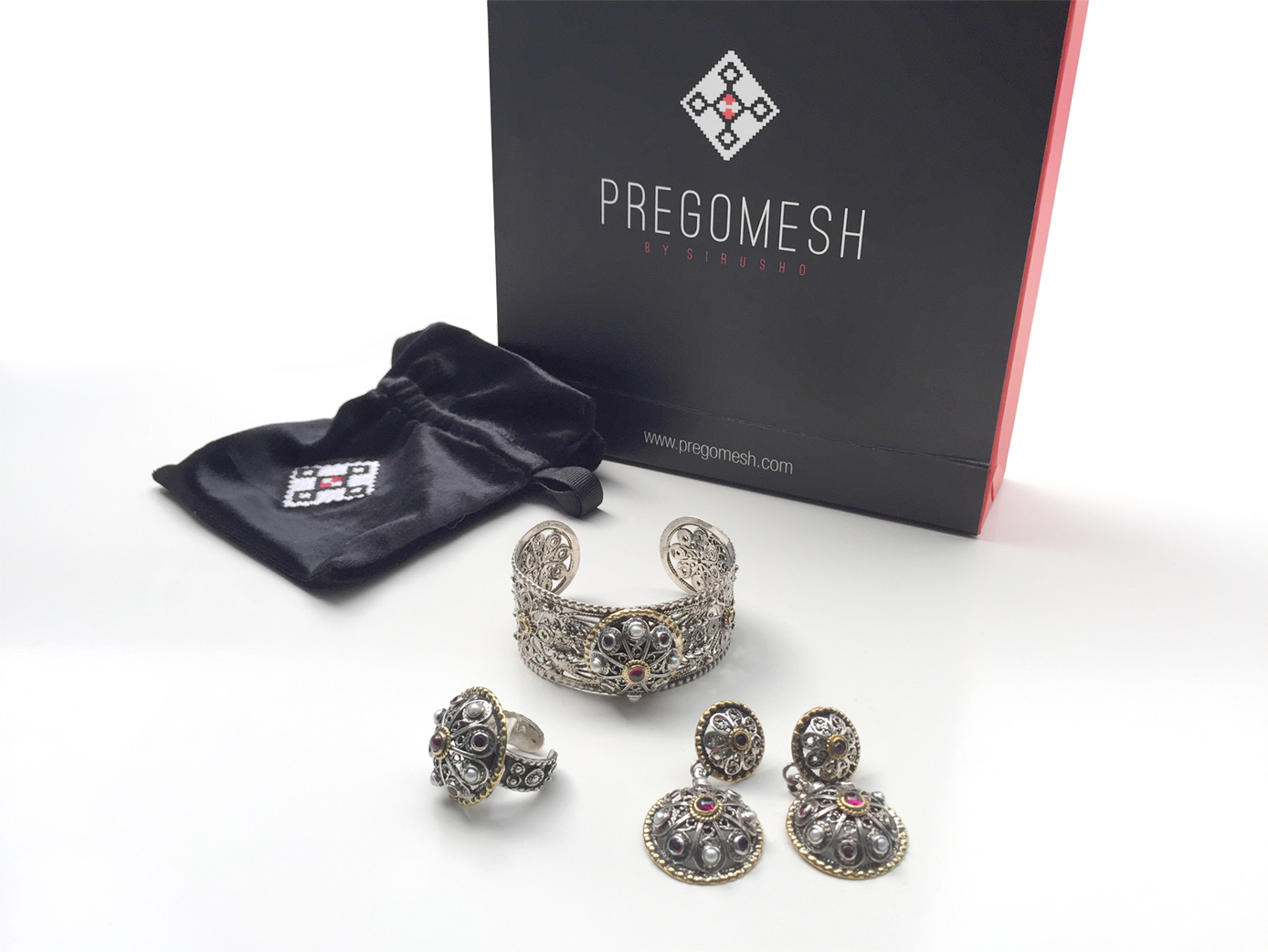 As for pricing, I can’t tell you what such items are usually worth, but I can say if they are worth the price to me. And my answer is certainly yes. These are unique pieces that you can’t find anywhere else. They are designed and crafted with great care displaying ethnic authenticity that is also fitting with modern classy looks. Everything is handmade from precious stones and metals, and it looks absolutely amazing! So taking all of this into consideration I find their prices to be rather modest.

As for shipping price, well I live in Europe far from Armenia and I’ve ordered a speedy shipping (2-4 business days) which isn’t cheap and costs $58.30, however if you have more patience (2-4 weeks) the shipping worldwide only costs $15.

All in all I am absolutely pleased with my first purchase of the PreGomesh jewelry, my sister loves them and I will certainly be buying more items from them!

You can find more information on all the items on their website: pregomesh.com

Oh and while we’re still on the subject, Sirusho just released her new music album ‘Armat’ which in my opinion is her best work to date. You can download the album on iTunes HERE.