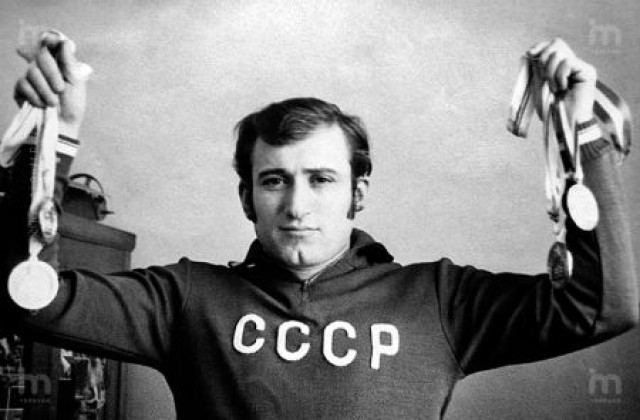 When he was 15, he got into a fight with a group of hooligans who after beating him, tied a heavy stone to his neck and threw him into a lake. He started moving his body under water and managed to rip the ropes off his hands, after which he released himself from the stone on his neck and swam to the surface. In an interview he said:

“If the stone was slightly heavier, I would not be able to get out of the water”.

This experience encouraged him to take swimming lessons. He appeared to be so talented that he started to compete on a professional level. Teaching himself without a trainer, he became the champion of Armenia at the age of 17. He began to beat his popular peers but was cut from the national team by envious trainers. It was a hard time for the young swimmer, but he did not abandoned his calling. He switched to finswimming and within 6 months became the “master of sports of the Soviet Union”, in 8 months he became “master of international class”, within 12 months he became the champion of the Soviet Union and within 14 months he became the European champion by breaking the World record.

During his competitions in Kiev he nearly died again when a rival competitor opened his oxygen tank and let a good amount of oxygen out to make him lose the competition. Nevertheless he continued the swim, losing oxygen he had to hold his breath for 75 meters. Feeling his life slipping he lost his consciousness but won the event and was immediately hospitalized. He only heard of his victory in the hospital, he recalls.

His courage was again tested in 1974 when Shavarsh was riding the morning bus to the swimming pool. During the ride, the driver lost control of the bus on the mountainous passage and was about to drive strait off the cliff. Shavarsh quickly jumped into the driver’s seat and was able to steer the bus away from the impending plunge, only half a meter from the side of the cliff. On that fateful day he saved 30 people including himself.

Two years later fate struck again. One cold morning on September 16th, 1976 he was doing his usual run along the dam in Yerevan (Armenia), when a large trolleybus carrying 92 passengers lost control and flew off the road into the freezing water. During the impact, most of the passengers fell unconscious – the bus sank approximately 10 meters deep. Without a second of hesitation, Shavarsh leaped into the freezing water to rescue people. Diving to the depth of 10 meters, Shavarsh used his feet to break the back window of the trolleybus. One by one, he saved 20 peoples’ lives (he actually pulled out more then 20, but not everyone made it). He spent nearly 20 minutes in the frigid water and accomplished 30 dives down to the wreckage. His brother – Kamo Karapetyan – also a swimmer, took care of the injured as Shavarsh brought them up to the surface.

After his 30th dive, Shavarsh lost consciousness. This courageous act has cost him dearly; he incurred heavy 2-sided pneumonia and blood contamination from the polluted water. Doctors were unsure if Shavarsh would ever recover. His life was hanging by a thread while he stayed unconscious for 46 days. Shavarsh finally recovered, but his professional career was at an end. Today’s experts agree that no one but Shavarsh could have done what he has done. Bystanders who watched Shavarsh bring people up to the surface said that his feet and back were full of glass shards. When later asked, what was the most horrifying part of this event, Shavarsh replied by saying:

“I knew that I could only save so many lives, I was afraid to make a mistake. It was so dark down there that I could barely see anything. On one of my dives, I accidentally grabbed a seat instead of a passenger… I could have saved a life instead. That seat still haunts me in my nightmares.”

He suffered from inflammation of longs, blood poisoning and extreme nervous exhaustion. Nevertheless, he went on to compete for the last time and had broken the world record for the 11th time. Physical and Psychological trauma had eventually taken a toll on the man and he had to retire from the sport. Afterwards, he developed a strong aversion for water and went to work in an electronics factory. He didn’t want to go near the water again he said.

Due to Soviet politics Karapetyan’s achievement was not immediately recognized. His name became a household name in the USSR on October 12, 1982, when Komsomolskaya Pravda published an article on his feat, entitled “The Underwater Battle of the Champion”. This publication revealed that he was the rescuer; and he received over 75,000 letters.

When asked about his encounters with fate he answered:

“It is something from above that is guiding humanity, you know, something is guiding us. Because at that moment I had to be at the world championships in Hannover. But for some reason my Visa was not ready, because I often won they didn’t grant me one for the competition on time, so I left bitter and went training when the crash happened.”

His heroism doesn’t end there. On February 19, 1985, Shavarsh just happened to be near a burning building (the famous Soviet Armenian sports hall), that had people trapped inside. He rushed in and started pulling people out without a second thought. Once again, he was badly hurt. He had inhaled toxic fumes and lost his consciousness because of it. Everyone thought he had passed, but a local cab driver felt a weak pulse and rushed him to the hospital. He spent a long time in the hospital recuperating from severe burns and smoke inhalation.

Karapetyan was later awarded a medal “For The Rescue of the Drowning” and the Order of the Badge of Honor. He also received a UNESCO “Fair Play” award for his heroism. A main belt asteroid, 3027 Shavarsh, discovered by Nikolai Chernykh, was named after him.

Recently Karapetyan was granted the honor to take part in the 2014 Winter Olympics torch relay for the second stage of the race. He was passed the torch in Moscow and had to carry it towards Krasnogorsk. During his run in Moscow the Olympic fire however suddenly went out. It was relit, but this led to much ridicule from western media outlets, eager to slam the Olympics held in Russia. On the next day he was allowed to carry the torch for a second time, making him the only person in Olympic history who carried the Olympic torch twice on the same event.

Since 1993, Shavarsh has been living a simple life. He owns and operates a shoe shop in Moscow called “Second Breath”. He regularly visits Armenia and the Nagorno-Karabakh Republic. He stated in a recent interview:

“I was carrying the torch for Russia and for Armenia.”

This is the fascinating true story of a real life superhero: Shavarsh Karapetyan remember his name!

Superman could eat his heart out . You makes all proud. God bless you

a man with heart & talent god bless you shavarsh

Unbelievable and inspiring. Heroes aren’t real, he is. I will remember this and will tell such story as much as I can…

Who is the greatest sportsman of all time? Why?

I’m writing a speech about him. Can you guys help me?

A true sportsman and a legend for true humanity may god give you peace in the hereafter.

INCREDIBLE. First time I read this I thought it was fake… This man is a GOD in a human body.

I remember the 2014 Olympics and the torch going out. As an American, it was sad to see how much the media wanted the Russian Olympics to fail. Great story to read, and thank you for sharing it. He is real life superhero.

Dear Shavarsh – you, my dear man, are a true hero. I have just read your story on FB and about the many lives you have saved. There is nothing selfish about you, only a big heart. God continue to bless you.

I am overwhelmed reading about Mr Shavarsh Karapetyan—he was both guardian angel and savior to so many in so many instances (and suffering for it)…. and yet remains simple and humble.
To the young people of today who read about superheroes through fiction, action films and gaming— here’s a REAL HUMAN SUPERHERO for you !
God bless you , Mr. K., and thank you !

I will never forget this extraordinary man.

Super hero , should be recognized so much more then he was !

What an amazing man

The world needs to hear more stories of the determination, compassion & heroism of individuals like Shavarsh Karapetyan.