For those who still haven’t heard the news, a brutal conflict was recently reignited between Azerbaijan and the ethnic Armenian people of Nagorno-Karabakh.

Hostilities between Christian Armenians and Muslim (Trukic) Azerbaijanis have a long history, but this specific conflict could be best traced to the early days of the Soviet Union. After the 1st WW, when the communist revolution changed Russia into USSR, the newly formed Armenian Republic and the Republic of Azerbaijan were both absorbed by this new entity. Karabakh or as it was historically known “Artsakh” was mostly (80% -95%) populated by ethnic Armenians, but Stalin (for various reasons) decided to assign the region to the administration of Azerbaijani SSR.

Usually, when the Nagorno-Karabakh conflict is discussed the question of moral rights overwhelms the conversation. Armenians would argue that Nagorno-Karabakh belongs to Armenians because the native Armenian people were living there thousands of years ago, evidenced by many ancient Armenian monuments and ruins there. Azerbaijanis in turn would often argue that the region belongs to Azerbaijan because it is recognized as such by the international community since the fall of the Soviet Union.

There are two main cardinal principles of modern international laws that are of importance here:

In layman’s terms the first law states that people have the right to freely choose their sovereignty and international political status with no interference. While the second principle advocates for fixed territories among states which should be respected by the rest of the world to avoid acts of aggression.

These principles can become conflicting when invoked by nations at the same time. Different legal scholars place different importance on the principles.

Prince Hans-Adam II of Liechtenstein, speaking to the International Institute for Strategic Studies on 25 January 2001, for example argued for a more flexible approach to territorial integrity, in line with historical norms, saying:

“Let us accept the fact that states have lifecycles similar to those of human beings who created them. Hardly any Member State of the United Nations has existed within its present borders for longer than five generations. The attempt to freeze human evolution has in the past been a futile responsibility and has probably brought about more violence, rather than if such a process had been controlled peacefully. Restrictions on self-determination threaten not only democracy itself but the state which seeks its legitimation in democracy.”

Others, would argue that territorial integrity is more important than the right to self determination and that the right to secede should be respected if and only if the people in question have suffered certain injustices, for which secession is the appropriate remedy of last resort.

In that case both principles seem to be in disagreement and this is exactly what most people are debating in the media, without a clear cut answer.

Soviet Union, at the time, had laws and procedures on secession of the republics of the Soviet Union from USSR. Thus the USSR by law allowed every Republic to secede through a referendum if a majority population within the republic voted to leave the Union (see code bellow).

You can download a copy of the codex HERE (note: It’s in Russian)

This very law was invoked by all Soviet republics including Azerbaijani SSR when the Soviet Union was collapsing in 1991, to declare their independence.

Now you might say, but wait a minute, Nagorno-Karabakh wasn’t a Republic, it was an Autonomous Region within the Azerbaijan SSR and perhaps therefore the law doesn’t apply to Nagorno-Karabakh. Well, not quite. In fact, not at all. The law applied not just to all soviet republics but equally to autonomous regions. Article 3 of the codex reads:

The peoples of the autonomous republics and autonomous formations retain the right to independently decide on the issue of staying in the USSR or secession from the union republic, as well as to raise the issue of their state and legal status.

According to this very law, Nagorno-Karabakh had as much right to declare independence as other republics including Azerbaijan, Armenia, Georgia, Ukraine and the rest.

Thus the Armenian people of Nagorno-Karabakh held two referendums. One resulting in overwhelming support for secession from Soviet Azerbaijan and the transfer of Nagorno-Karabakh Autonomous Region (NKAO) to the Armenian SSR within Soviet Union and another resulting in overwhelming support for secession from the Soviet Union itself. In 1988, the European Parliament even adopted a resolution supporting the demands of the people of NKAO to unite with Soviet Armenia (See bellow).

Because the people of Nagorno-Karabakh were acting well within the legal framework of the Soviet Union, it is fair to say that they had as much right to independence as any other former Soviet republic, regardless of the two conflicting principles of international law on territorial integrity and the right to self-determination. Azerbaijan itself at the time wasn’t even an independent republic whose territorial integrity was at stake. It was part of the Soviet Union whose laws allowed secession of autonomous regions.

So why then is Nagorno-Karabakh unlike all the other republics still not recognized by the international community as an independent state? The simplest answer to that question is “oil“! Azerbaijan is one of the world’s largest oil and gas producers, and when oil is involved, history tells us international law and human rights are not the primary interest of politicians. 30 years later people are still suffering the consequences. Let’s put an end to this crisis. For the sake of peace:

Sevak Avanesyan performs “Krunk” (The Crane) at the recently bombed Ghazanchetsots Cathedral of Shushi in Artsakh (a.k.a Nagorno-Karabakh).

Artsakh has all the moral and legal rights to be an Independent Republic.

Thank you for adding the legal articles for Independence drafted by USSR in preparation for the end of the union in 1991. Artsakh is and always has been free since the day the Armenian Artsakh people voted to be independent after that collapse. The Artsakh-Armenians are not occupants nor occupying a territory that belongs to another nation or entity. They are Armenians living as all self-determined people should on their homeland, Artsakh.

Thank you for the clear historic explanation. I am going to read this article to my 5th and 6th grade classes during their library time at the Charlie Keyan Armenian Community School in Fresno.

I made a few updates including a resolution from the European Parliament in support for the demands of the people of NKAO for reunification with Soviet Armenia. As can be read here: 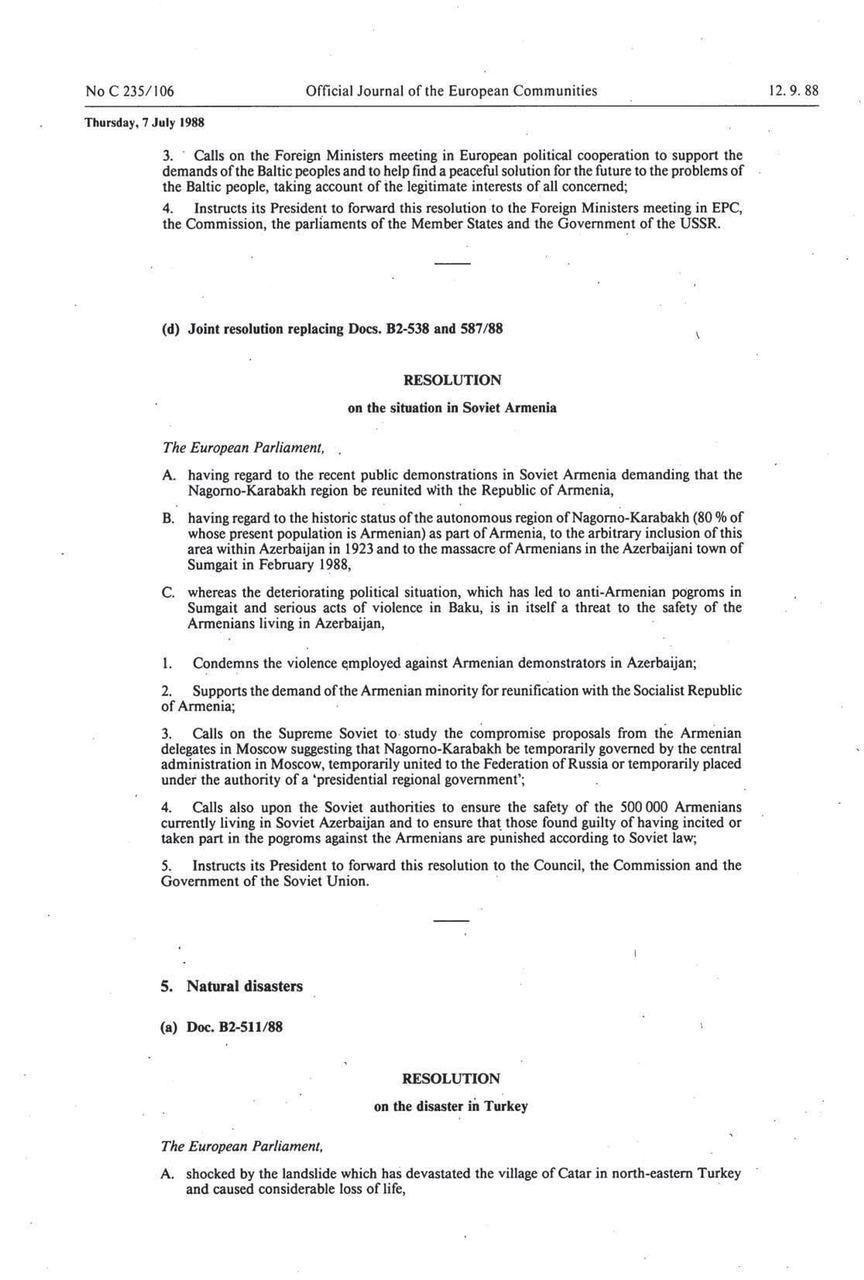 Thank you for showing the facts and how Azerbaijan has no rights to Artsakh!

The Azeri government keeps pushing their propaganda they have several PR forms working on spreading their lies and spent over 100s of millions lobbying…
It’s refreshing to see a publication that hasn’t been purchased by Alijev or Erdogan! Refreshing to see people who value the truth above $$$

Since the European Union has accepted Artsakh independence, , then why the U.N. had not done the same? Any information from the U.N. about this subject? I have been to Artsakh recently and saw coin making machine , for Dikran The Grest , in a castle ;Ամրոց՞ with his name . Lot of ancient exposed carvings, sculptures, thousands years old, with Armenian traces and writings. Enough lies from Azerbaijan and Turkey. About time the World sets the record straight. We need friends in the official administrations to help us achieve our goals. , Turkey used US occupation with the elections,… Read more »

Thank you for shedding light on this very important subject. It is clearly the way towards the legal/diplomatic resolution of the “Nagorno-Karabakh” conflict and a means for the official recognition of the republic of Artsakh. I am wondering why the Armenian diplomacy and the diaspora hasn’t pushed/pursued this matter more forcefully during the last 30 years in conjunction with the Minsk group activities.

From Wikipedia: “In January 1990 Nakhchivan declared independence from the USSR to protest against the suppression of the national movement in Azerbaijan, and became the Nakhchivan Autonomous Republic within the newly independent Republic of Azerbaijan a year later.” Under what auspices did this autonomous jurisdiction secede from the Soviet Union? It seems like a case of what’s good for the goose is good for the gander.

If we let them get Artsakh then they will come for Armenia. Pan Turkish is a disease. They’re using white phosphorus & terrorist to fight