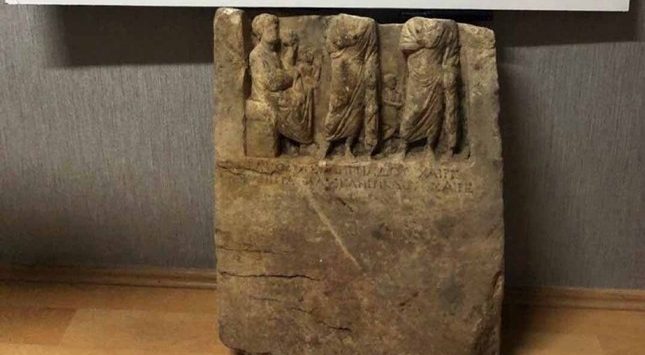 Turkish anti-smuggling police in northwestern Balıkesir province has recovered another ancient artifact. This time a tombstone belonging to an Armenian king from the kingdom of Commagene.

The kingdom of Commagene was an ancient Armenian kingdom of the Hellenistic period, and the kings of Commagene were of Artaxiad Armenian ancestry, often displaying their lineage on their royal coins and statues.

The ruins of the tomb-sanctuary of the Armenian king Antiochus atop Mount Nemrut in Turkey were named to the UNESCO World Heritage list in 1987.

A few years ago Hungarian police had also confiscated Armenian antiques from a Turkish truck driver under way to Lithuania.

But was Commagene ARMENIAN kingdom?
Do they had any connections with Armenians?

Absolutely, it was an Armenian satellite kingdom just like the Kingdom of Sophene was. Commagene was an offshoot of Sophene. Also read here: https://www.peopleofar.com/2012/07/07/armenian-kingdom-of-commagene/

You got any ideas about Mitanni? There is much speculation about that bronze age Kingdom, studies say the nobility and royalty were Indo-Aryan, but others believe they were proto-Armenian, or something else.

What throws the archeologists is the inscriptions which are all in Greek. That was the Hellenistic age, and everyone wrote in Greek, including the Jews.