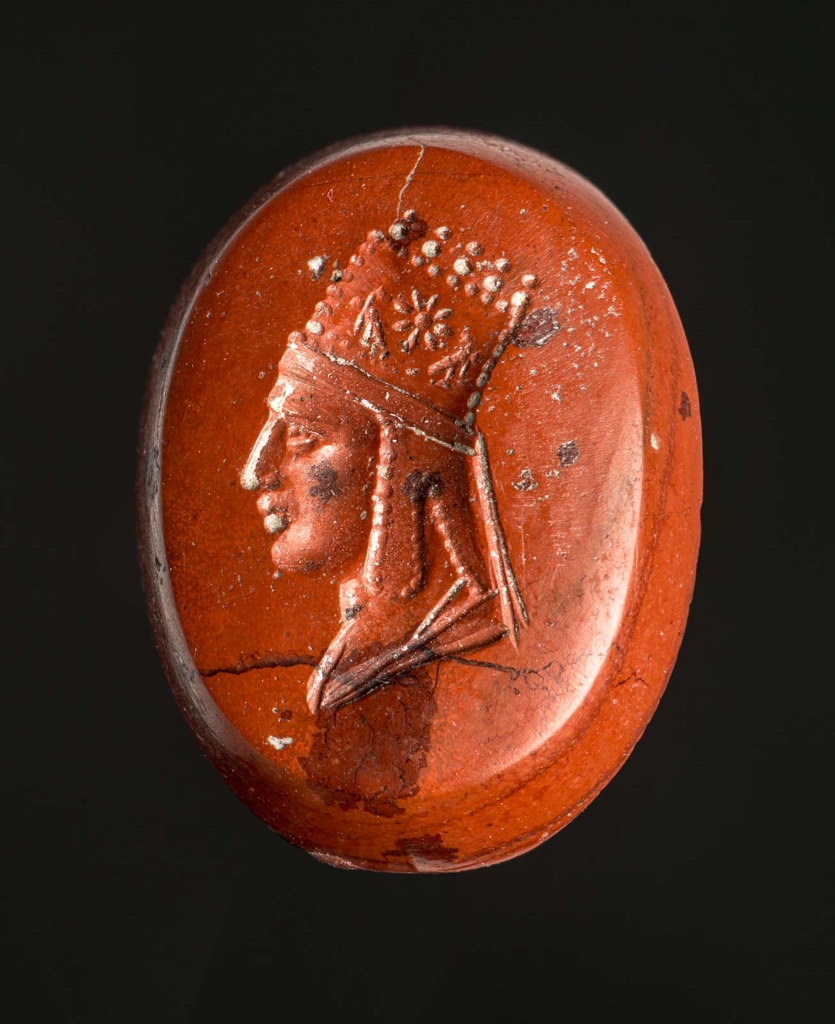 A rare intaglio gemstone with the engraved bust of Tigranes the Great of Armenia is displayed on the website of the Museum of Fine Arts in Boston. The gemstone is made of red Jasper and dates to the early–mid 1st century B.C. It’s 14 mm. (9/16 in.) in length. According to the description of the museum, the gemstone was bought in Smyrna (Ottoman Turkey) in 1900 by Edward Perry Warren who sold the gem to the Boston Museum of Fine Arts in 1901.

To preserve the image a cast was made by the museum.

Red Jasper. Intaglio. Head of Tigranes II (the Great), facing left. He wears the Armenian tiara with five spikes/peaks rendered by two pellets, a larger topped by a smaller. The entire crown is outlined with round dots. On the tiara, an eight-pointed star with a central circle is flanked on either side by birds (possibly eagles), facing outward but turning their heads back towards the central star. Two flaps also outlined with dots extend from underneath the tiara, covering his hair and ear.

Tigranes II “the Great” was one of the finest kings of ancient Armenia. At its height, his empire extended from the Pontic Alps (in modern north-eastern Turkey) to Mesopotamia, and from the Caspian Sea to the Mediterranean. Tigranes invaded territories as far away as Ecbatana and took the title King of Kings which, at the time, according to their coins, even the Parthian kings did not assume. After subduing the Parthians, Tigranes also assumed the authority over former Parthian territories. He was called “Tigranes the Great” by many historians and writers, such as Plutarch. The “King of Kings” never appeared in public without having at least four kings attending him. Cicero, referring to his success in the east, said that he “made the Republic of Rome tremble before the prowess of his arms.”

Gems and coins with image of Tigranes the great were quite popular at the times. The auction house Christies published a similar artifact in 2014. A gemstone made from calcified Chalcedony engraved with a portrait of Tigranes II of Armenia. The artifact was dated to circa 95-56 BC. and valued at $10,000 – $15,000.