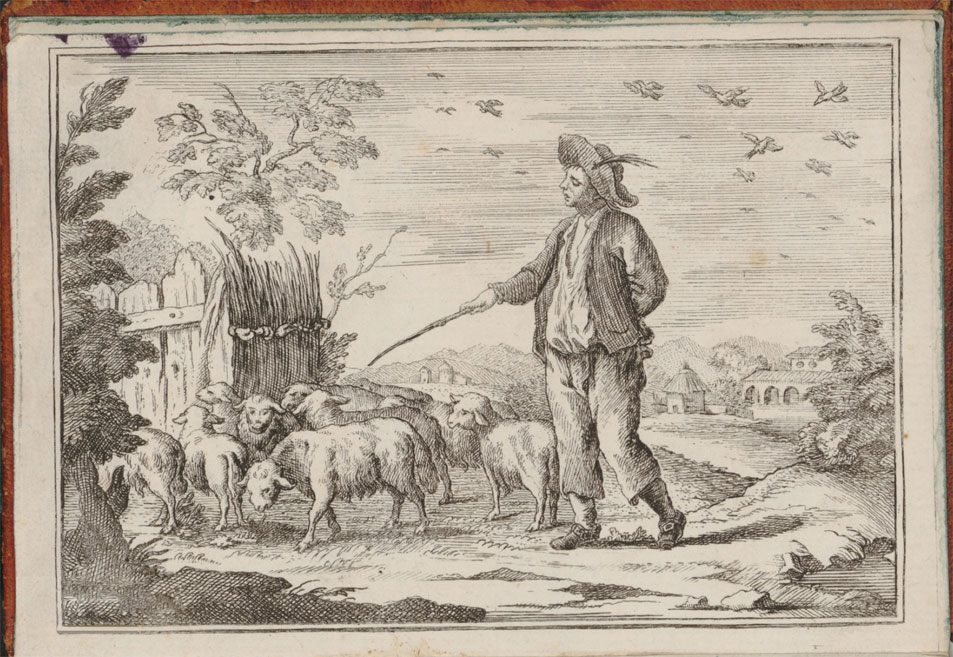 It is generally considered that the constitution of the United States (created in 1787) is the oldest working constitution in the world. Its contents was directly inspired by the enlightenment movement of its era. In comparison, the Declaration of the Rights of Man and the Citizen of the French Revolution was created in 1789 and the Polish Constitution hit the printing press only in 1791. However, 14 years before the US constitution was printed, the Armenians had already published an enlightenment era constitution for a free Armenia.

The little known Armenian constitution was titled Vorogayt Parats and Nshavak – “Snare of Glory” and “Target” – which were volumes that represent some of the very earliest modern constitutional political writing in the world. Authored and published by Shahamir Shahamirian in his printing house in Madras (India) where he settled as a merchant among a small Armenian community of India.

He was born in New Julfa, Iran and later moved to India where he became an affluent merchant and a notable figure in the Armenian liberation movement.  As a writer and philosopher, Shahamirs work was to pursue his views on an independent Armenian nation.

Every human being, whether Armenian or of some other race, whether man or woman, born in Armenia or brought there from another country, shall live in equality and shall be free in all their occupations. Nobody shall have the right to enslave another person and workers should be paid like in any other kind of job, as is laid down in Armenian legislation. – Vorogayt Parats (1773) pp. Article 3.

Vorogayt Parats, printed in 1773 lists out the advantages of representative governments and why they are necessary, as opposed to monarchies. It further explains why the Armenians, as a chosen people, must establish their own laws for themselves and abide by those alone. The Nshavak is the document of laws itself, comprised of 521 articles. The document includes equality for men and women and describes the importance of the separation of the Church and state, while maintaining representation from the clergy in legislative issues.  The Vorogayt Parats and Nshavak plan for a representative democracy, to be led by the House of Armenia (the parliament), which would be obliged to provide for orphans, including in terms of their education, while also looking after the sick, the elderly, the poor, and those with disabilities.

Prior to the constitution Shahamirian also published Nor Tetrak vor kochi Hordorak, “The New Pamphlet known as ‘Exhortations’”. This was a book that aimed at inspiring young Armenians to be informed and aware of their historical homeland and its state under foreign rule. Read more about the details here.

The Enlightenment and love for literature

The ‘Enlightenment’ was an important intellectual and philosophical movement that dominated the world of ideas along with the rise of nationalism in Europe during the 18th century. The Enlightenment has given presidency to ideas such as liberty, progress, tolerance, fraternity, constitutional government and separation of church and state. It is often considered the philosophical foundation of modern western civilization.

There are many theories on what exactly ushered the age of enlightenment. Most historians agree that the invention of printing and the growing number of literate population played an important part in the development. As we known from history, Armenia has a rich writing tradition which is considered to be a major factor behind the survival of the Armenian people. Despite centuries of prosecution by numerous invading empires, Armenians managed to preserve their language, religion and culture, all thanks to this exceptional love for literature. Today the ancient manuscript repository (Matenadaran) located in Yerevan, holds one of the world’s richest repositories of medieval manuscripts and books which span a broad range of subjects, including history, philosophy, medicine, literature, art history and cosmography in Armenian and many other languages. Although much has been destroyed (e.g., over 10,000 manuscripts were burned by Seljuk Turks in 1070 after a 40-year siege of Kapan), over 30.000 have survived and are preserved until today. In 2012 UNESCO proclaimed Yerevan the book capitol of the world celebrating the 500th anniversary of Armenian book printing. It is therefore not surprising that Armenians have been involved and helped pioneer philosophical ideas such as the Enlightenment that helped nurture the idea of national liberation.

Armenians have always been attracted to philosophy with great love and passion for literature. Be it Christian like St. Gregory of Narek, mystics like the oldest Gnostic movement the Paulicians or the secular movements like the enlightenment.

This was also the period when Armenians acquired great wealth due to exceptionally successful trade on the silk road. You could find Armenian merchants everywhere from the Netherlands to the East Indies. Armenian merchants became so wealthy that both the Persian and the Russian empires tried to sway Armenians to live within their borders. For example one of Peter I the Great’s orders mentioned in one of his notes as following:

“Armenians, as much as possible, you have to care for and facilitate in any way possible, encouraging their arrival [to the Russian empire]”

The Persians under Shah Abbas even relocated 150.000 Armenians into their heartland and established an Armenian district New Julfa, in Iranian capitol Isfahan, with the purpose of benefiting from Armenian knowledge of the silk road trade.

Although the Armenian Enlightenment was fairly similar to that of the European thinkers, it was nevertheless different in certain aspects. The European Enlightenment was advancing secularism, and critique of religion and thus for a separation of church and state. National states had to play a central role in shaping the various institutions, academia, publishing houses, universities etc… Since Armenia was under Ottoman occupation and didn’t have a national state, the religious and the minority institutions took on the role of the state and worked together to develop and spread Enlightenment ideas. The Armenian Enlightenment was a diverse movement that embraced both the critics of religion and the clergy as the guarantors of Armenian culture; faith and tradition remained a central tenet of this project. There was no division between secular and clergy enlightenment thinkers.

Mkhitar of Sebaste (1676-1749) played a pivotal role in the Armenian Enlightenment. He gained a sizable following in Istanbul but due to growing sectarian conflicts left for Venice along with his congregation. Venice granted them asylum and gifted the Island of San Lazzaro by the Serene Republic in 1715. Mkhitar and his followers took refuge on the island and established a monastery that formed a focal point of the Armenian Enlightenment. The Mkhetarists contribution to the Armenian Enlightenment was in their attempts to create religious, linguistic and cultural revival. Mkhitar began his theological work in Anatolia and resumed it in Istanbul and Venice, writing 14 personal works and 27 translations as well as editions of religious works, hymns, and spiritual praises. Mkhitars first writings to be published in Venice were the Compendium of Theology of Blessed Albert the Great in 1715, followed by The Spiritual Garden in 1719 and the Mkhitar Book of Vices and Book of Virtues in 1721. He also prepared a new edition of the Armenian Bible. His religious work went hand in hand with his linguistic work. He had witnessed the low literacy rates of his fellow Armenians during his travels and was keen to raise their education levels. To this end, he and his fellow monks worked on rendering the Armenian language more accessible to the uneducated masses. Mkhitar published the first manual of vernacular Armenian based on the dialects used in Asia Minor. The subsequent publication of books in this new dialect laid the foundation of nineteenth century Armenian.

Yet as a theologian, Mkhitar was also convinced of the importance of the classical Armenian. Mkhitar published the first grammar book of classical Armenian in 1730. In addition to these publications, the Mkhitarists compiled an Armenian dictionary, and wrote a number of books on the practical arts and sciences. They published a history of the Armenian people in three volumes in 1769 and began publishing Bazmavep, a literary, historical and scientific journal in 1843. The aim of all these projects was the unification of Armenians, intellectual growth and national awakening.

This endeavor was so effective that famous enlightenment thinkers would regularly visit the Mkhitarists, study Armenian and learn from their philosophy.

Armenia had become a symbol of free thinkers in bondage. Popular enlightenment thinkers would regularly wear Armenian attire. One of the founders of the Enlightenment movement Jean-Jacque Rousseau who helped inspire the French Revolution would often wear his favorite Armenian attire in public.

Another famous European author of the enlightenment era, Lord Byron, was a known Armenophile who often visited the Mkhitarist order in Venice and had studied the Armenian language himself. According to him:

“These men [Mkhitarist priests] are the priesthood of an oppressed and a noble nation, which has partaken of the proscription and bondage of the Jews and of the Greeks, without the sullenness of the former or the servility of the latter.

This people has attained riches without usury, and all the honours that can be awarded to slavery without intrigue. But they have long occupied, nevertheless, a part of the House of Bondage, who has lately multiplied her many mansions. It would be difficult, perhaps, to find the annals of a nation less stained with crimes than those of the Armenians , whose virtues have those of peace, and their vices those of compulsion. But whatever may have been their destiny – and it has been bitter – whatever it may be in future, their country must ever be one of the most interesting, on the globe ; and perhaps their language only requires to be more studied to become more attractive. If the Scriptures are rightly understood, it was in Armenia that Paradise was placed. – Armenia, which has paid as dearly as the descendants of Adam for that fleeting participation of its soil in the happiness of him who was created from its dust. It was in Armenia that the flood first abated, and the dove alighted. But with the disappearance of Paradise itself may be dated almost the unhappiness of the country ; for though long a powerful kingdom, it was scarcely ever an indipendent one, and the satraps of Persia and the pachas of Turkey have alike desolated the region where God created man in his own image.“

This was a time when Armenians did not have a sovereign country of their own, nevertheless they managed to remain a tight nation with its own identity. Armenians have managed to become extremely wealthy due to the trade on the silk road and express their love for literature and (political) philosophy by creating one of world’s earliest known constitution. With their unique form of the Enlightenment, with its notions of scientific method, reason, and advancement of knowledge along with its religious and traditional tone, Armenians left a lasting impression on the enlightenment thinkers and the subsequent Romantic movement pioneered by the likes of Lord Byron.

Agop Jack Hacikyan (2000) The Heritage of Armenian Literature: From the sixth to the eighteenth century

Other sources are linked in the article

Thank you for another one of your fascinating articles!