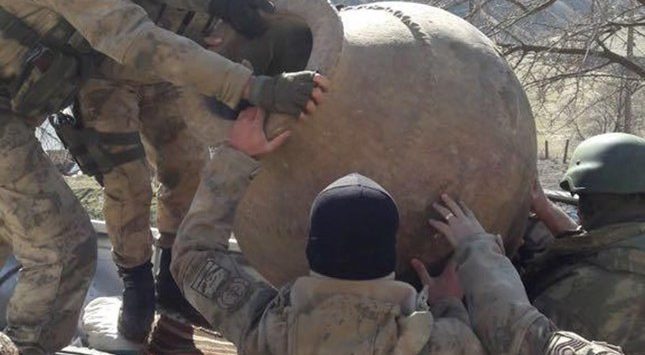 Turkish media is recently reporting on how the Turkish military has stumbled upon a 1.500 year-old Karas during anti-Kurdish operations in historic Western Armenia. The discovery was reportedly made at a house of a Kurdish PKK member. The military operations are therefore labeled “anti-terror operations” in Turkish media. Daily Sabah reports:

The pithos was reportedly discovered Tuesday, hidden in a secret part of a house located in Kolonkaya Village.

The Turkish military has handed the vessel over to the local museum where it was confirmed that the 1500 year old vessel with its 145cm (4,75 feet) height and 95cm (3,11 feet) width is the largest single-piece historical artifact found in the area.

In Armenian villages such large vessels are a common sight in the traditional households, often stored in the basements, sometimes dug halfway into the ground. They are called Karas and are a part of Armenian culture since time immemorial. They are mostly used for storing wine and grains. Learn more about the Armenian Karas from two articles published by the Smithsonian magazine: part 1 and part 2.

As often the case, the historic context of such artifacts is obfuscated in Turkish media especially if such artifacts belong to the era of Armenian habitation in what is today Eastern Turkey. Turkish media conveniently omits mentioning the fact that 1500 years ago at the sight of the discovery that region was part of Western Armenia which was inhabited by Armenians and annexed by the Byzantine Empire in the 5th century AD. Instead Daily Sabah mentions:

Tunceli was home to numerous ancient civilizations, including the Urartu, Roman, Byzantine, Sassanid and Seljuk Empires.

Not mentioning Armenian at all but including the Seljuk Empire which had only penetrated into Western Armenia 500 years after the discovered vessel is dated.

In addition it seems that the Kurdish and Turkish media is engaged in a propaganda war surrounding the artifact.

Daily Sabah in a separate article (read here) reports that Kurdish YPG supporters claim on social media that the jar, ‘a historical Kurdish heritage’, is being looted by Turkish soldiers from Afrin in Syria where Turks are engaged in military operations against the Kurds.

On their Facebook page Daily Sabah has made a “fact” checking post regarding this claim. Read: https://www.facebook.com/DAILYSABAH/posts/934099463413813

Similar claim has been made by the Consul General of Turkey in Chicago on his Twitter page where he calls such claims “fake news”, see bellow:

The truth is this huge 1,500-year-old pithos was discovered recently in anti-terror operations in eastern Turkey province of Tunceli https://t.co/8QijSR0oCU pic.twitter.com/kZwNUQfqWu

Thus a cultural Armenian artifact ‘Karas’ from a time of Armenian habitation of Eastern Turkey is being reported in Turkish media without its true historic Armenian origin and debated on its origin and the nature of “discovery”.

Unfortunately much of Armenian cultural Heritage has been (often deliberately) obfuscated and eventually lost through similar fashion. After Armenians have been forcefully depopulated from those regions during the beginning of the 20th century, their cultural heritage has been appropriated and divided among the victors, who seemingly aren’t done dividing and appropriating historic Armenian territories and its rich cultural heritage.

They found it in Tunceli? That (for those who don’t know) is the region historically called Dersim before Turkey changed all the place names after the genocide, which was populated by the kindly Zaza Kurds who helped so many Armenians escape to safety during the genocide. These Kurds didn’t take orders from the Ittihad and they didn’t lose sight of their own humanity, and as a consequence, they were the targets of a second, smaller attempted genocide by the Turks in the 1920’s ( https://en.wikipedia.org/wiki/Kurdish_genocide). They (the Turks) were less successful in their ethnic cleansing that time around, but apparently… Read more »

You are making some good points. But before the region was called Dersim it was called Daron and was part of Greater Armenia. It became known in latin sources as ‘Daranalis’ (read Ptolemy) and only later became Dersim. We are grateful and always will remember the generosity of many Kurds and even Turks. But we will also remember the pain some of the caused to us. Now this article was not meant to incite hatred, far from it, it is meant to reflect on some false claims in Turkish media and the way Armenian heritage of historic Armenian land gets… Read more »

Mhp you are clearly nothing know about History of Kurds. Maybe, just maybe (wikipedia almost no one can consider as a reliable source ) they helped in Tunceli, but they are killed too many Armenians during exile. Tunceli and some region terrain is so rough, even Ottoman rule stuggle to reach, this made some of Kurds bandists, (Eşkiya) because lack of proper state authority. Kurds killed some of Armenians because, they were rich and they have too many precious thing their side during exile. Ottoman rule is clear, they can carry only transportable and precious goods. Exile was an opportunity… Read more »

Thank you, admin – I didn’t know it was called Daron before! (As an aside, I only recently learned that it was called Dersim as an abbreviation of the name of an Armenian priest called Der Simonian!)