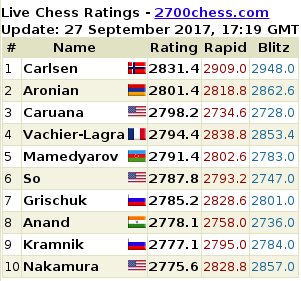 Armenia’s chess Grandmaster Levon Aronian wins the FIDE Chess World Cup 2017 (held in Tbilisi, Georgia), by defeating his Chinese opponent Ding Liren during tie-break games. In the first game Levon started with an advantage and defeated Ding in 30 movies. In the second game Levon started with a clear disadvantage but was able to turn the game around and win the second game of the tie-brake as well.

The final score became 4-2 and Levon Aronian won the FIDE World Cup for the second time (he was the winner of the World Cup in 2005) after which Aronian is rated world’s second best chess player. Both finalists have qualified for the FIDE Candidates Tournament, which will take place in March 2018.

He was applauded by the public with a standing ovation after his victory. See the video bellow: