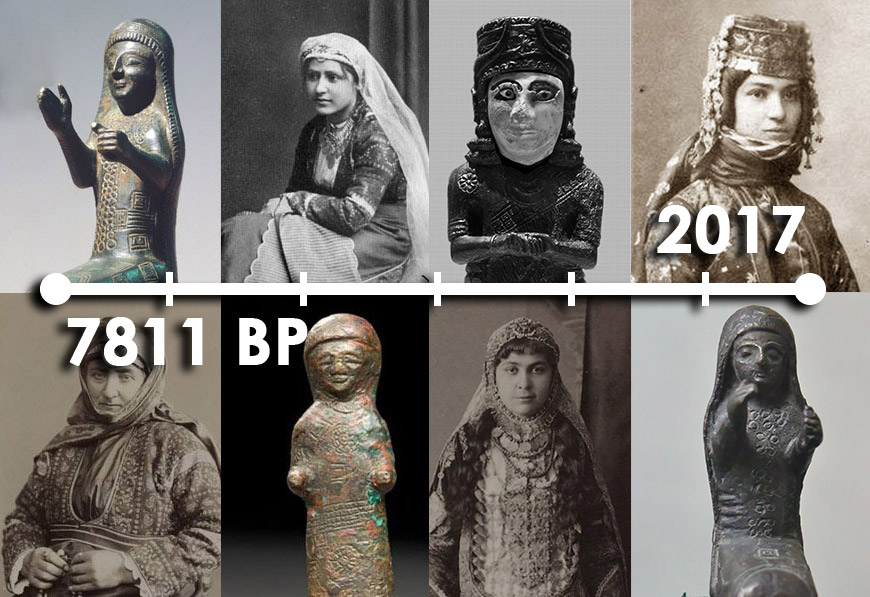 That the Armenians are an indigenous people of the Armenian Highlands has already been well established by prominent studies in the field of genetics. Haber et. al. (2015) for example could not find any traces of admixture among Armenians for at least 4000 years, concluding that:

“Our tests suggest that Armenians had no significant mixture with other populations in their recent history and have thus been genetically isolated since the end of the Bronze Age.”

“The position of the Armenians within the global genetic diversity is unique and appears to mirror the geographical location of Anatolia. Armenians’ adoption of a distinctive culture early in their history resulted in their genetic isolation from their surroundings.”

The same conclusion was reached by Hellenthal et. al. (2014) in their Genetic Atlas of Human Admixture History, published in Science magazine. Because of such findings some scholars have referred to modern Armenians as a “Living Fossil”.

Prompted by such findings, the Head of the Laboratory of the Institute of Molecular Biodiversity of the National Academy of Sciences Levon Yepiskoposyan has stated in a press conference that:

Similar statements have been made by a famous genetics blogger Dienekes where he confirms Armenian genetic continuity but asks if this continuity extends beyond the Bronze Age:

“Speaking of the Caucasus/Middle East, it seems clear as a first approximation that the Bronze Age Armenians are quite similar to modern Armenians. Whether the genetic continuity of Armenians extends beyond the Bronze Age, or Armenians were formed by mixture in the Bronze Age remains to be seen.”

New evidence reveals that this continuity indeed extends beyond the Bronze Age (based on Mitochondrial DNA), going back all the way to 7811 years ago. Mitochondria are passed from mothers to their children. Therefore, the study of mitochondrial genomes enables scientists to trace the unique history of females over time.

“We analyzed many ancient and modern mitochondrial genomes in parts of the South Caucasus and found genetic continuity for at least 8,000 years,”

said Ashot Margaryan and Morten E. Allentoft from Centre for GeoGenetics at the Natural History Museum of Denmark.

“In other words, we could not detect any changes to the female gene pool over this very long time frame. This is highly interesting because this region has experienced multiple cultural shifts over the same time period, but these changes do not appear to have had a genetic impact—at least not on the female population.”

The researchers were interested to study this part of the world because of its position as a cultural crossroads since ancient times. It’s also known as an important area for the potential origin and spread of Indo-European languages.

This result suggests that there were no major genetic shifts in the mtDNA gene pool in South Caucasus across the last 7,800 years.

We find that the lowest genetic distance in this dataset is between modern Armenians and the ancient individuals, as also reflected in both network analyses and discriminant analysis of principal components.

Armenians from various regions including Erzrum, Ararat and Artsakh showed closest affinity with the ancient inhabitants of the Armenian Highlands.

It is clear that the modern Armenian groups and the ancient group display obvious similarities.

Furthermore the paper identified a noticeable decrease in the effective female population size around 25 thousand years ago during the Last Glacial Maximum (LGM), which is followed by a rapid (roughly 10-fold) population increase until around 10 thousand years ago (see figure bellow). Suggesting a rapid population growth during the Neolithic, when people first discovered farming. 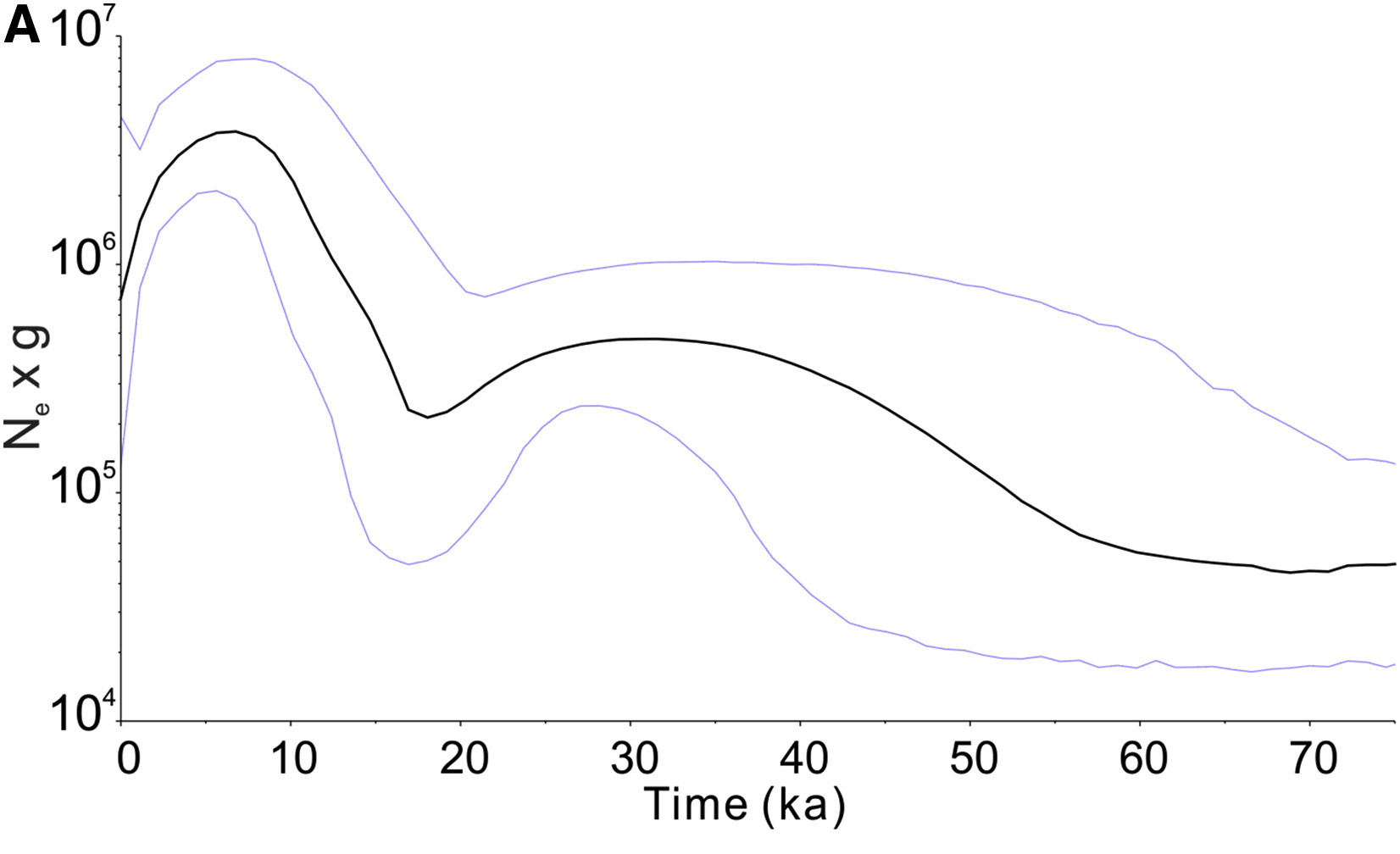 These findings have important implications in the scientific community. It appears that during the last eight millennia, there were no major genetic turnovers in the Armenian female gene pool in, despite multiple well-documented cultural changes in the region.

The archaeologically and historically attested migrations of Central Asian groups (e.g., Turks and Mongols) into the South Caucasus do not seem to have had a major contribution in the maternal gene pool of Armenians. Both geographic (mountainous area) and cultural (Indo-European-speaking Christians and Turkic-speaking Muslims) factors could have served as barriers for genetic contacts between Armenians and Muslim invaders in the 11th–14th centuries CE.

The area has served for millennia as a major crossroads for human migration. The researchers hope to expand the study by including both modern and ancient samples from neighboring countries, which could involve collaborations with researchers in Georgia and Azerbaijan.

I’m going to leave you with a video I once made in honor of beautiful Armenian female costumes.

NOTE: All the sources are linked at the appropriate locations inside the article

They came from their home world, Krypton.

amazing work, funny as this may sound, I fear my DNA tested in case any trace of Turkishness is present. What do you suggest.

I would not worry about that at all. First of all most Turks don’t even have any traces of real Asiatic Turkishness present. It’s actually quite rare in Anatolia. Which means that there was more of a cultural replacement than genetic. But even if you did find, some traces of Asiatic DNA there is no way of telling if this came through Turkic invasion or some other admixture like for example through perhaps a Russia relative who might have had Tatar admixture. In any case we are what we are there is absolutely no reason to be afraid or hateful… Read more »

Could you provide an article, perhaps in the future, that explains how to go about interpreting a readily available inexpensive DNA test for “Armenian – Like ” results? What is the genetic pattern to look for?

Hello John Boyajian, I understand there are many Armenian Families with the name Boyajian. My grandfather from Diyarbakir had a Boyajian relative. I urge you to test NOW while many of the companies are having sales with atDNA testing at $69. I personally tested with FTDNA as I wanted to test yDNA and mtDNA too. The least expensive test is autosomal DNA (family finder with FTDNA.) It will give you MANY matches to work with and start to learn about your ancestors. So go ahead and jump in and get some results! That’s the best way to learn. It’s fun… Read more »

The real reason not to have a DNA test done is right here: https://www.youtube.com/watch?v=IrVPoxvXz9s

I tried again and it worked just fine for me. Could conceivably be your computer or your ISP? I don’t know why it’s not working for you, but I recommend trying again – it’s worth the effort, even though it really shouldn”t have to BE an effort

Armenia the heir of Urartu - PeopleOfAr

my family name is Hofler, but i’m a large percentage Armenian in my DNA, i’m RH negative, Actually i love Duduk music and other Armenian things, food, rugs, music, i’m all old fashioned, but i really think of Armenia as my Homeland. ps my DNA will be posted later and ill update. fj von Hofler

When I think of Armenia I think of Kardashians. Comparing ancient and modern Amenians makes me think of an ice-age Venus figurine. Makes me think there has been genetic continuity in Armenia for 25,000 years…