The Low Countries is a coastal region in western Europe, consisting especially of the Netherlands and Belgium which historically have often been part of the same domain. The name of the modern country the Netherlands has the same meaning and origin as the term “low countries” due to “nether” meaning “lower”.

The region politically had its origins in the Duchy of Lower Lotharingia. After the disintegration of Lower Lotharingia in 1190, the Low Countries were brought under the rule of various lordships including the house of Burgundy, the house of Habsburg and later under the Roman Catholic king of Spain. Even after the political secession of the northern autonomous Dutch Republic (or “United Provinces”) in the 16th century, the term “low countries” continued to be used to refer collectively to the region. The region was temporarily united politically between 1815 and 1839, as the United Kingdom of the Netherlands, before this split into the three modern countries of the Netherlands, Belgium and Luxembourg.

From the Highlands to the Lowlands

Armenian traces in the Netherlands and Belgium go way back. Perhaps the first notable contact was in the 4th century when Armenia became the world’s first Christian nation and monks spread to all corners of the world professing Christianity. One such missionary was Servatius who in the 4th century became one of the first to preach the Gospel in western Europe. He is believed to be the first to Christianize the Netherlands and became the bishop of Tongeren (Belgium). According to various accounts Servatius came from Armenia to western Europe preaching Christianity. He is considered a Saint and has been credited with many miracles, some of which continued to manifest after his death in 384 AD, contributing to popularity of pilgrimages to his remains at one of Europe’s oldest Basilica (Basilica of Saint Servatius) in Maastrich. Servatius (Servaas in Dutch) is a patron saint of the city of Maastricht (in Holland), and the towns of Schijndel (in Holland) and Grimbergen (in Belgium).

Other Armenian missionaries like one identified by Belgian hagiographers as Macaire made the Saint Bavon Abbey in Gand his home in the year 1011 before moving on to preach the gospel across Europe.

Armenian merchants first appeared in the Low Countries in the 12th, 13th and 14th century, when Dutch merchants arrived in Cilicia and Armenian trading houses opened in the Low Countries. Armenians brought in carpets, dyes, cotton, and spices from Armenia and around the world. Armenians have been mentioned in the city of Bruges, once a Dutch port, in the twelfth century. Later, in 1345, Armenians had been permitted to sell rugs in front of the church in Bruges. In 1478 the Armenians had established a hospice “National Hostelry” in that city, and a priest officiating at the Church of the Carmelites. Also in Bruges, Armenian merchants had their own trading centers, importing cotton goods, spices, perfumes and other materials from the Orient and exporting European goods to markets in the East. Their presence continued well into the 15th century, until Bruges lost its importance as a trading port.

In the 16th century Armenian merchants came to Amsterdam to sell pearls and diamonds, and to purchase local products for export.

Armenian merchants arrived in the Republic of the Seven United Dutch Provinces in three immigration waves during the subsequent 17th and 18th centuries.

The first wave arrived from Julfa, a suburb of Isfahan, in Iran and were called ’Jolfalijnen’ or Persians by the Dutch. The second group came from the main Ottoman seaports Aleppo, Constantinople and Smyrna and the third from Archangel, Moscow and St. Petersburg.

The main incentive to migrate was the rise of the Dutch Republic, and Amsterdam in particular, as a center of global economic activity in the 17th century.

The Armenian business houses of Amsterdam threw off branches into other European cities and countries — Venice, Leghorn, Marseilles, Spain. From the coasts of the Baltic Sea they imported yellow amber, for which there was a great demand in Smyrna. The import of Persian silk was almost entirely in Armenian hands from 1700 to 1765. As the Mediterranean Sea was infested by pirates during that epoch, their ships were escorted by war vessels. Among such sailing ships, one was named Coopman van Armenien (Merchant of Armenia). A consular report, dated 1653, states that the Armenische Coopman, escorted by the warship Gelderland, had reached Smyrna in safety.

Although most Armenians, particular those coming from Iran, initially specialised in trading raw silk, they spread their economic risks by importing a variety of products from Turkey and Iran, including precious stones, Turkish yarn, camel and goat hair, raisins, figs, rice and coffee beans. They also imported whale teeth from Archangel, amber from Danzig and mirrors from Venice and exported Dutch products ranging from Leiden cloth, linen and moquette to furniture and tiles, to Turkey and Iran. Tiles exported from Holland were reused in the church of Santa Maria in Cadiz.

Dutch paintings, engravings and poetry show that Armenian merchants had established themselves firmly within the societies of the Low Countries.

A Dutch writer has said in De Amsterdammer, a magazine of the date of August 14, 1887 that:

“The story of the Armenian community is a golden page in the history of the city of Amsterdam.”

The Armenian community in Amsterdam was initially small. Approximately 800 Armenian names appear in the notarial acts of the city’s municipal archives for the period from 1600 to 1800. The community reached its demographic zenith in 1668 when 66 Armenian family names can be counted. Rich Armenians imitated the Amsterdam elite, by ordering gold- and- silver birth and marriage medallions bearing Armenian inscriptions to mark births and marriages (see bellow).

The Armenian Church of Amsterdam

The first Armenian priest was invited to Amsterdam to hold religious services in private homes in 1665. A notarial inventory dating from 1703 refers to an Armenian hiding church in the Koningsdwarsstraat.

On 30 January 1714 the authorities issued a permit for Armenians to erect an official church building, visible from the street. In May 1714, 40 Armenian merchants financed the conversion of two warehouses into an Armenian Church on the Kromboomsloot in the centre of Amsterdam. In 1749 the outside entrance was embellished with a monumental gable stone with a lamb and an Armenian text, privately financed by the Armenian priest Johannes di Minas.

After serving its purpose for about a century and a half, this edifice was closed because of the dwindling of its congregation. In 1874, by order of the Catholicos of Echmiadzin, the building was sold for 10,000 florins. After that, the building housed a Catholic primary school for girls, for more than a century. After the Second World War the Armenian community in Amsterdam started to grow, and Armenians bought the building back in 1989 and today it still functions as an Armenian church in the center of Amsterdam. 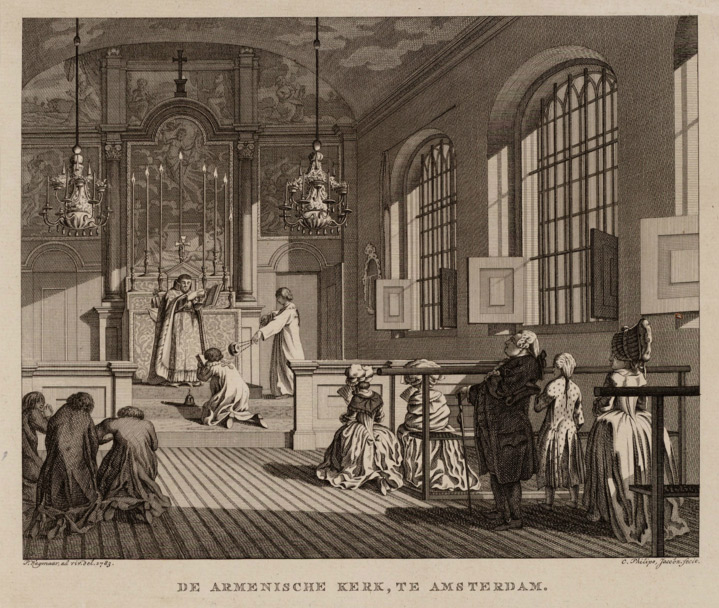 Where there are Armenians there are bound to be Armenian Churches and books. In 1656 the Patriarch of Armenia sent the priest Mathevos Tsaretsi (Matheos of Tsar) to Venice in order to investigate whether a Bible could be printed in the Armenian language. Even though Venice already had centuries of good relations with Armenians, the Catholic church made it very difficult for the Armenians to print orthodox Armenian literature. Thus Tsaertsi decided to try his luck in the Northern Low Countries which at the time were governed by Protestants and were known for their religious tolerance for everything besides Catholicism. Around 1660 Mathevos Tsaretsi (Matheos van Tsar as he was known in Dutch) settled in Amsterdam and in 1661 the first book in Armenian was printed titled: “Jesus the Son” (Hisus vordi) (see image bellow).

In 1666 it was finally time and a first printed Bible appeared in Armenian. The Armenian printers were assisted in cutting and casting of the Armenian alphabet by none other than Mayor of Amsterdam Nicolaas Witsen. He personally assembled printing masters such as the Hungarian letter cutter, typographer and printer Miklós Tótfalusi Kis and the celebrated Daniël Elsevier who at the time still worked in Amsterdam.

This beautiful map of the world was made in Amsterdam by brothers Hadriaan and Peter Damiaan Schoonebeek in 1695.

Many Armenian merchants in Amsterdam went to the Dutch colonies in Southeast Asia in the 19th century to trade, and to set up factories and plantations, establishing a community of Armenians in places such as Java in Indonesia. The intriguing history of Armenians in European colonies is also a fine subject for another post.

The Napoleonic wars put an end to the Armenian life in the Netherlands. The city of Amsterdam was almost depopulated after its occupation by the French. The Armenian presence in Belgium however was not broken throughout the centuries, although the size of the community did not start growing considerably until the end of the First World War and the forced mass exodus of Armenians from Turkey following the 1915 Armenian Genocide. During that 20th century Armenian immigrants in both Belgium and the Netherlands became quite successful trading carpets, tobacco, diamonds and other jewelry. In the tobacco sector, original Armenian brands like Davros, Arax, Marouf and Enfi were the only cigarette brands made in Belgium. The Missirian, Tchamkertian, Matossian and the Enfiadjian families held a monopoly over the tobacco industry in the country. Another sector the Armenians of Belgium excelled in was trade of diamonds. A member of the Barsamian family was the President of the prestigious Diamond Club of Belgium in 1920 at a time when Tcherkezian, Ipekjian and Hampartsoumian families were top names in the business.

Dutch leaders of the resistance would often praise Armenian courage in resisting the Germans. I’ve made several videos in the past about this subject, for those interested make sure to watch these video series: Zealand girls in Armenian arms.

Another wave of Armenian migrants came to the Low Countries during the 70ies as migrant workers and refugees from Iran, Turkey, Lebanon and Syria. The final notable wave of Armenians came to the Low Countries after the fall of the Soviet Union from Armenia and Azerbaijan due to countless pogroms (such as, 1988 Sumgait pogrom, 1988 Kirovabad pogrom, 1990 Baku pogrom, 1992 Maragha Massacre etc…) during the Nagorno Karabakh conflict.

I have always wondered if the 16th century Dutch theologian Jacobus Arminius was ethnically Armenian. The proponents of his theology are called Arminians.

I do not think so. I just dropped these lines about Armenian Bankers…..

I am a Resident of South Carolina for 18 years , it is mind boggling to me about History of Armenians in Low Country, Its Very Interesting to find out now, I am A Descendent of Armenian Genocide Survivor, What a small world we are living in.I am Shocked but i am happy in the same time. Thank you.

Looking for detailed information about the interface between Episcopius in Leiden and the transitory Pilgrims (mostly leaving in 1620) rep. Mr. Robinson…written about by Bradford in his “History of the Plimouth Settlement.”