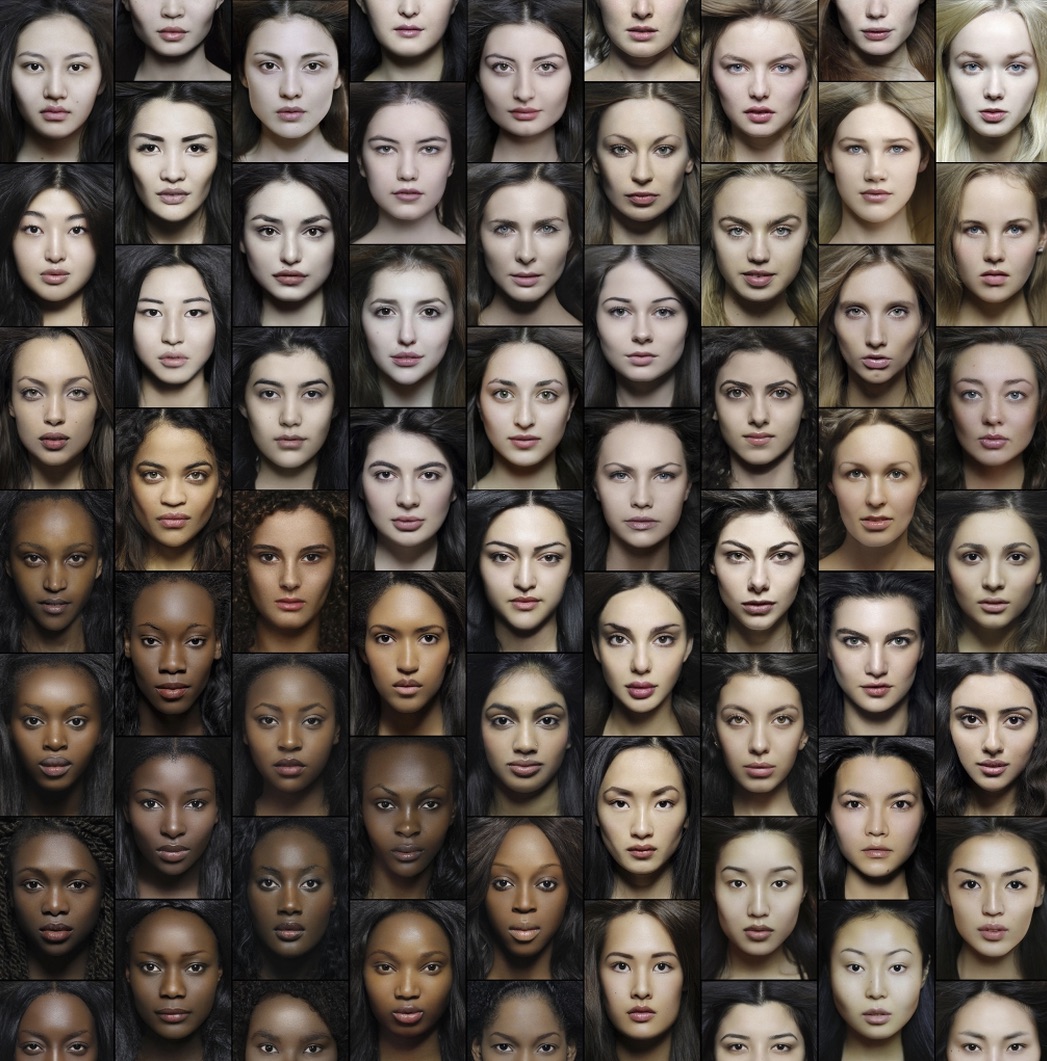 This is a very interesting project that was initiated a few years ago by Natalia Ivanova a Russian photographer and photojournalist with the aim to show the scale of ethnic diversity in a visually appealing and a creative manner. I personally love such projects and the original idea behind it. This ambitious project aims to cover all ethnic groups of the world and to present them through female beauty. It consists of a series of photo portraits and video interviews conducted by the author with young women of various ethnic backgrounds, each portrait is accompanied by an information note on the ethnic group represented.

The project is set to develop and grow over time by constantly adding more pictures of ethnic faces to its database. The girls are selected from various ethnic backgrounds with at least two generations of ancestry from the same ethnic group on both paternal and maternal sides. The pictures and video’s are regularly released on social media (Facebook, Instagram, Google+, Vk, Flickr) and YouTube. The project is described on the official website as follows:

“The Ethnic Origins of Beauty (Les origines de la beauté) is a non-profit, artistic, documentary and research project about the ethnic diversity of mankind, presented through the beauty of women of all ethnic groups of the world.

The aim of this project is to show the real scale of ethnocultural diversity in a full, systematic and creative way; to illustrate each and every distinctive ethnicity, however small it is, and whatever its political status.

The project includes photo-portraits and video-interviews of young women representing their ethnicity with accompanying informational note about every people.”

This project notably received the acknowledgment of UNESCO and was first presented at a UNESCO exhibition devoted to international women’s day in March 2014, at its Parisian headquarters.

What is interesting here is that old works of physical anthropology often included such galleries of physical types of different ethnic and racial groups, and for many people this would have been one of the few opportunities to see people much different than themselves. It is therefore quite interesting to see modern technology being applied to preserve a snapshot of the appearance of examples of living ethnic groups.

Of particular interest to me are the Armenian and to some extent other Caucasian portraits. The project includes 3 gorgeous Armenians ladies accompanied by the following description: ”

Armenians are an ethnic group native to the Armenian Highland.

The Republic of Armenia and the unrecognized de facto independent Nagorno-Karabakh Republic are the two countries where Armenians form a majority, both with a nearly homogeneous population. Because of a wide-ranging and long-lasting diaspora, an estimated total of 5-7 million people of full or partial Armenian ancestry live outside of Armenia. As a result of the Armenian Genocide, a large number of survivors fled to many countries throughout the world. The largest Armenian populations today exist in Russia, the United States, France, Georgia, Iran, Lebanon, and Syria.

Christianity began to spread in Armenia soon after Jesus’s death, due to the efforts of two of his apostles, St. Thaddeus and St. Bartholomew. In the early 4th century, the Kingdom of Armenia became the first nation to adopt Christianity as a state religion

Bellow are the 3 portraits of Armenian ladies that are included in the project so far (click on the images to enlarge). 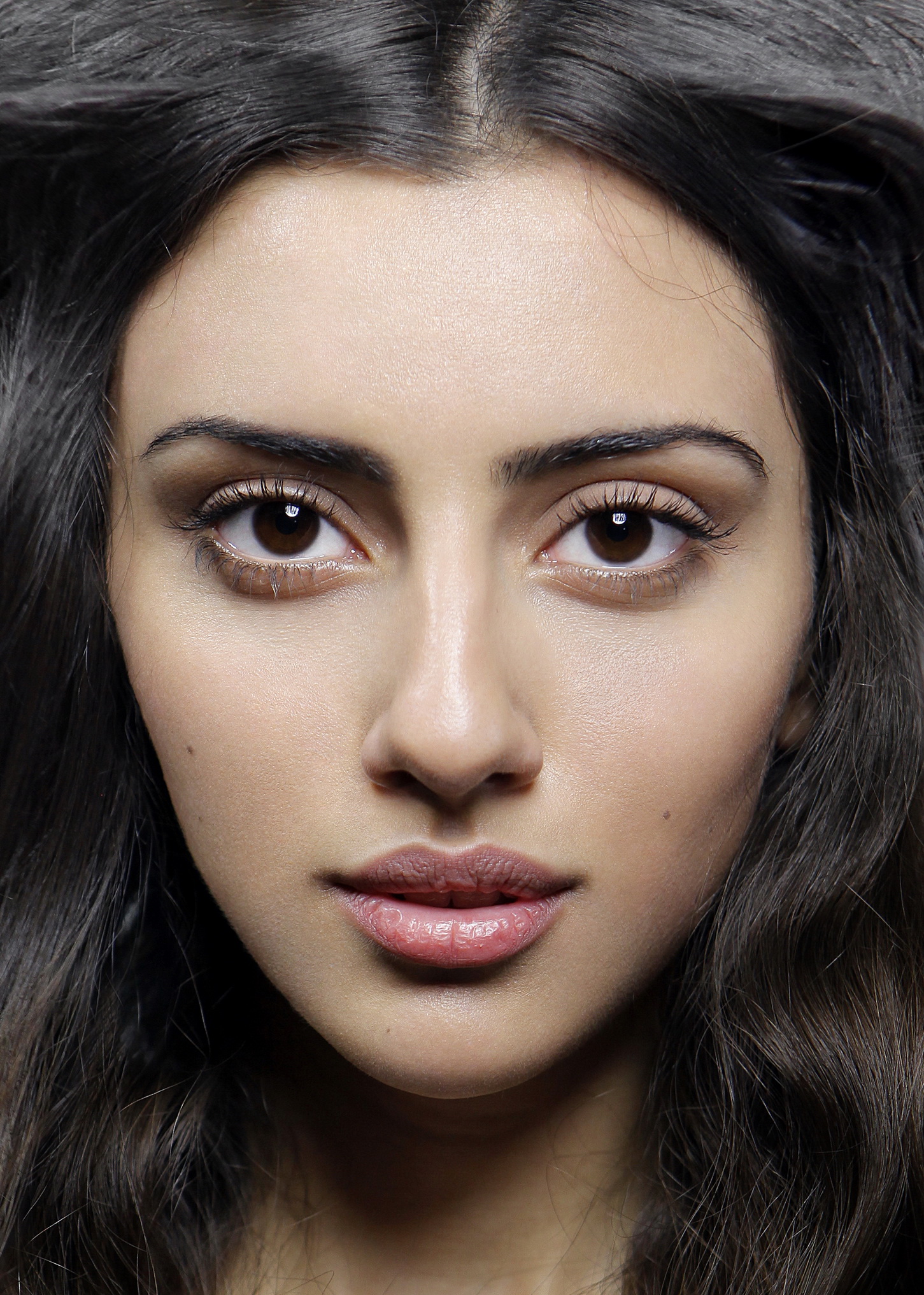 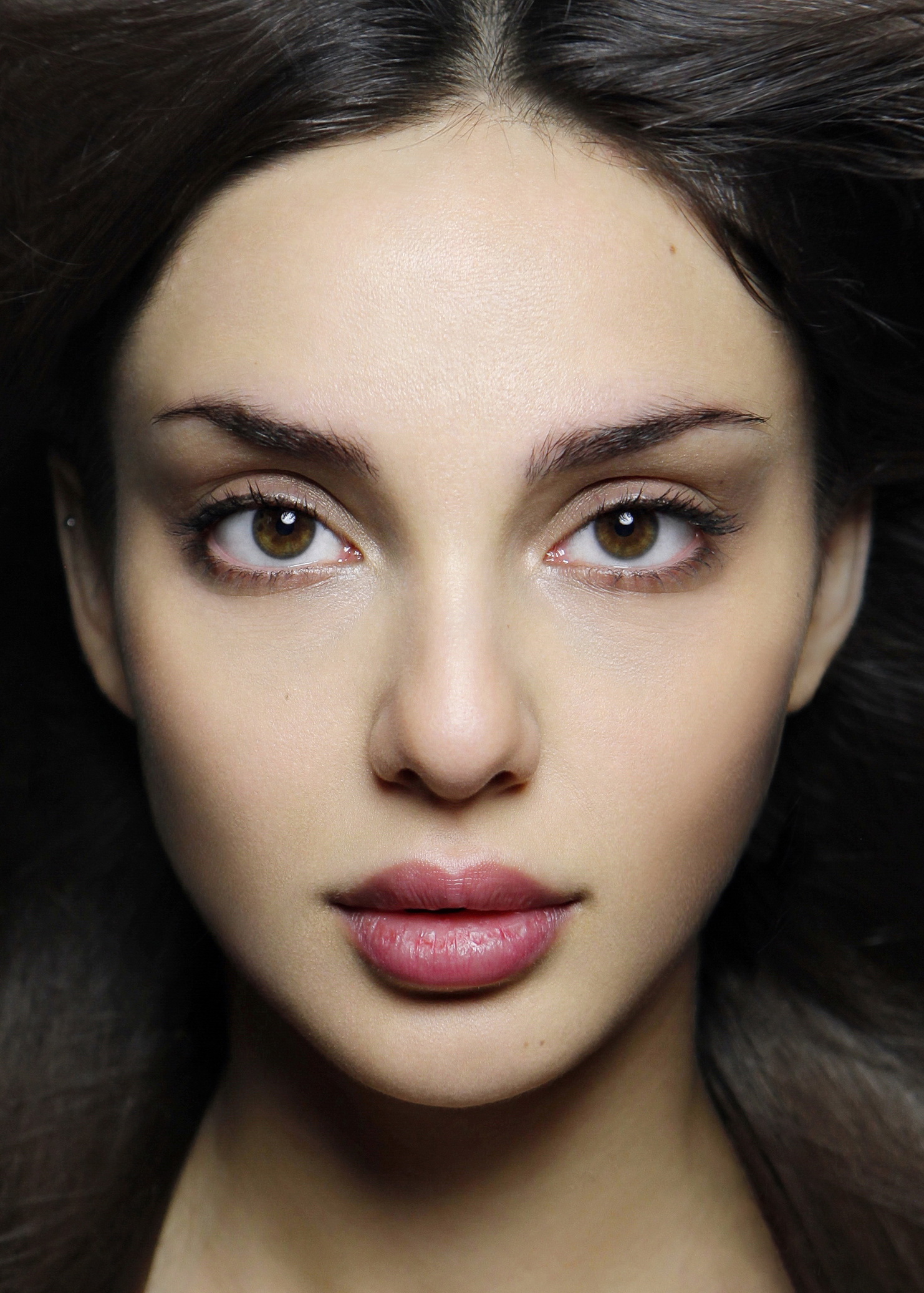 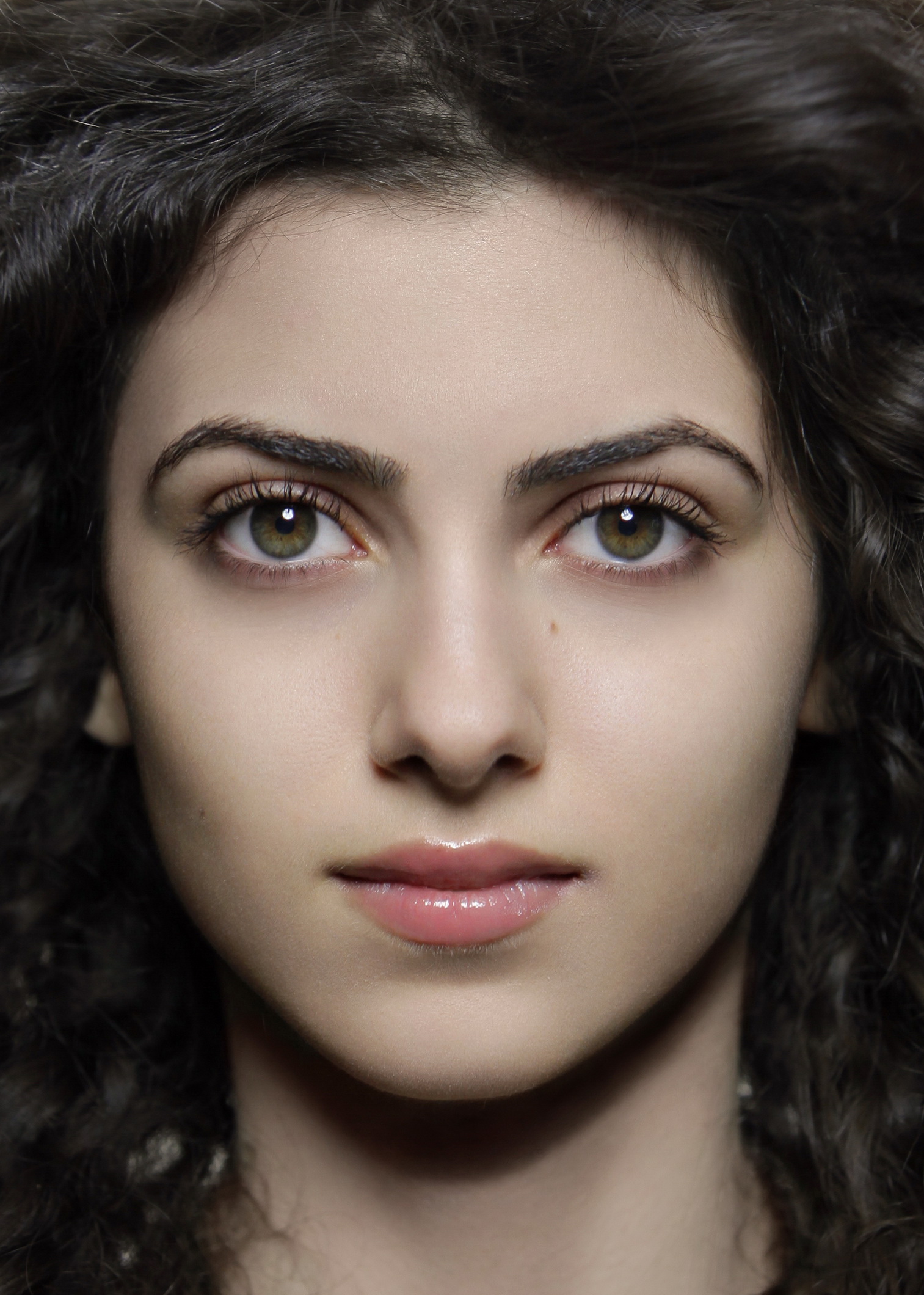 And here are the video-interviews that are available so far (the second is only in French).

I took the liberty to further collect all the portraits available at this point from the Caucasus (see bellow). 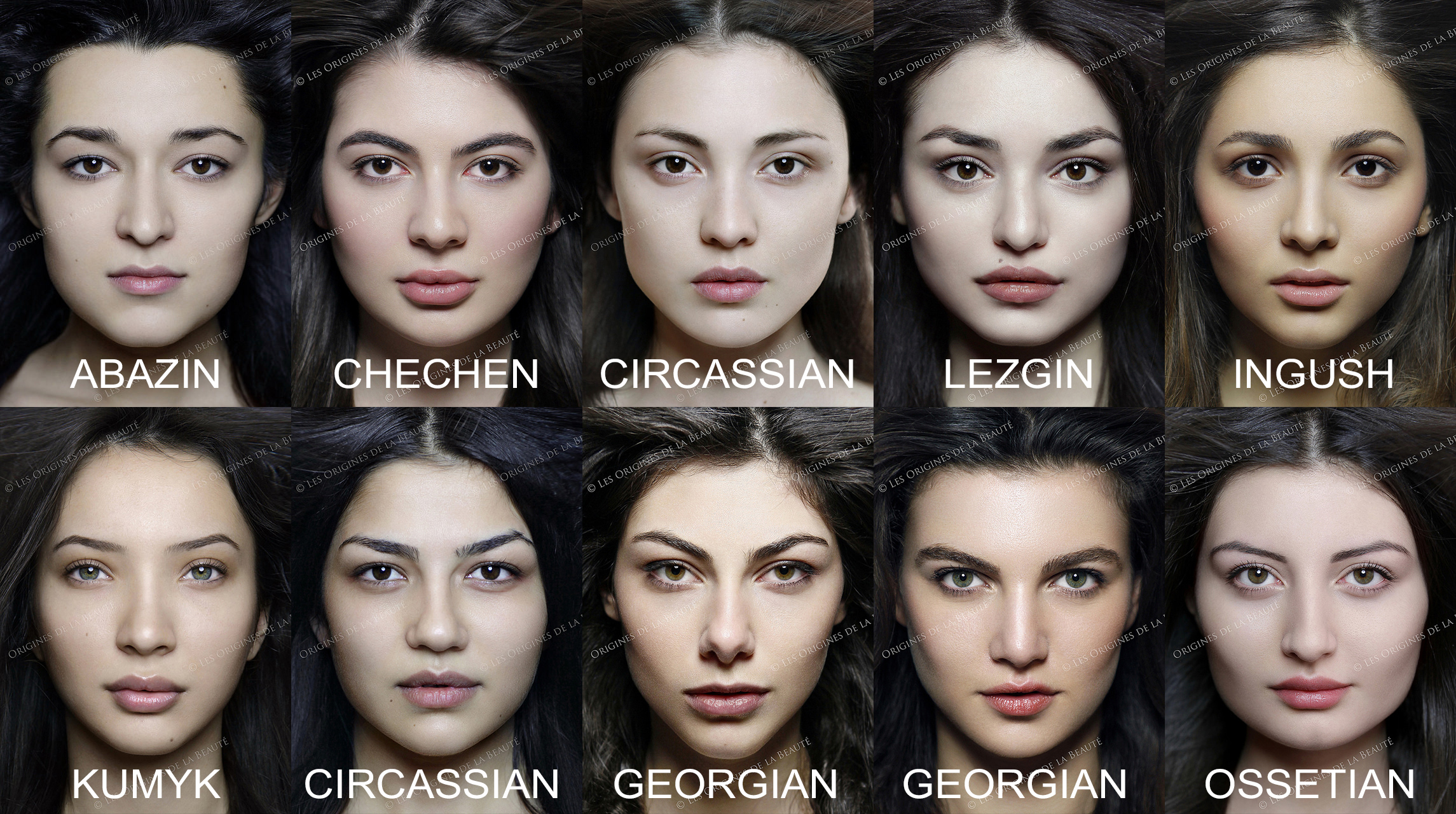 All of the ladies are obviously gorgeous but what I find interesting is that nearly all of them (except for the second Georgian and perhaps the Ossetian) seem to display some slight Asiatic features. Compared to the Armenian ladies it’s obvious that the North Caucasus has been mixing with Asiatic peoples much heavily than the Armenians. This is of course not surprising considering the countless invasions and conquests of the region by the Tatar, Turkic and Mongolian tribes, not to mention the geographical proximity to the Asiatic people. Perhaps another factor is their shared religious affinity, since most of the North Caucasians and Asiatic people such as the Turks and Tatars share the Muslim faith which allows for intermarriage with little socio-cultural barriers.

Equally not surprisingly the more Christian populated regions like Georgia and Armenia display less of such Asiatic features. Of course it’s also known by now from recent genetic studies that Armenians have remained genetic isolates on the Armenian Highlands for the past 4000 or 5000 years, showing little to no admixture from invading forces. Haber et. al. (2015) for example has concluded in his paper recently published in European Journal Of Human Genetics that:

“Our tests suggest that Armenians had no significant mixture with other populations in their recent history and have thus been genetically isolated since the end of the Bronze Age.”

“The position of the Armenians within the global genetic diversity is unique and appears to mirror the geographical location of Anatolia. Armenians’ adoption of a distinctive culture early in their history resulted in their genetic isolation from their surroundings.”

Other studies have confirmed these finds as for example a paper published in Science by Hellenthal et. al (2014) while investigating worldwide human admixture history couldn’t find Armenian admixture for the past 4000 years.

Similar conclusions have been made by the heads of the Armenian-DNA project where Peter Hrechdakian during a lecture at the library of congres titled “DNA & the Origins of Peoples: The Armenians” stated that:

“One of the reasons why Armenians are interesting to study, is that they didn’t really mix too much with other people once they became Armenian.”

“Armenians show a great deal of genetic stability over the past 3000 years with little genetic impact of invasions (perhaps die to topography, the rude climate, rejection of converts from other religions, and the strong cohesive force of the mix of culture, language, and religion).”

This has also been confirmed by a major recent study (Morten et. al. 2015) into ancient DNA authored by over 44 scholars and published in the journal Nature. When DNA samples from ancient burial sights found all over the Republic of Armenia have been collected and analyzed the results revealed that modern Armenians perfectly relate to the ancient people of the Highlands found in Bronze Age and Iron Age burials.  Referring to this study, the Head of the Laboratory of the Institute of Molecular Biodiversity of the National Academy of Sciences Levon Yepiskoposyan has recently stated in a press conference that:

Similar statements have been made by a famous genetics blogger Dienekes where he states referring to this study that:

“Speaking of the Caucasus/Middle East, it seems clear as a first approximation that the Bronze Age Armenians are quite similar to modern Armenians. Whether the genetic continuity of Armenians extends beyond the Bronze Age, or Armenians were formed by mixture in the Bronze Age remains to be seen.”

I hope this was an interesting and a thought provoking analysis. It’s certainly an interesting, beautiful and a creative project worth keeping an eye on as the portrait database grows and new ethnicities are added regularly.

Guess I muddied the Armenian pool by marrying an German/Swede/Norwegian man!

A lot of us did, let’s face it. If it’s not reflected in the results, perhaps it just means that we weren’t markedly different to begin with, or that perhaps they already had Armenian DNA mixed in with theirs. After all, Armenians have always travelled…

So now because of your choice the rest of Armenians are not allowed to learn about their genetics?!

A
Reply to  Irina Donoyan-Rachow

i guess you did. at this rate, Armenians will soon
be joining the ranks the Hittites and Sumerians, ie, extinct. Keep marrying non-Armenians, people.

Les origines de la beauté is my favorite site. I spend hours there looking at women features as i am obssesed with the people’s ethnic origins and i totally agree and i can say that after all my researches i also noticed that (north)caucasian people have once and for all asian features, it’s very visible somehow. This love for ethnic origin’s researche started from the day i realized that i don’t look like an armenian without makeup but i do look like a little more an armenian with makeup and that really shocked me, i started understanding that this can’t… Read more »

Dear Stella, I wouldn’t necessarily claim that you are mixed if your parents are both Armenian and they don’t know of any mixing in their families. Armenians are a very diverse people when it comes to phenotypes (looks) but very similar genetically. One does not exclude the other. In fact we have many native fair haired and blue or green eyed Armenians. For example the Hamshentsi Armenians display these traits quite extensively. In fact some scientists believe all blue eyed people trace origin from the Armenian Highlands on the black sea coast. http://www.dailymail.co.uk/sciencetech/article-511473/All-blue-eyed-people-traced-ancestor-lived-10-000-years-ago-near-Black-Sea.html Just because you have a fairer complexion… Read more »

Thank you for this answer and for explaining, Yes all the ancestors my parents know are armenian and anything else.I agree with the article you sent, even my father told me long ago that i am the real armenian between all others, he says that armenians were blue-eyed and light-haired before. It is difficult to say that i am mixed, most likely it is the oldest armenian physicall appearance that came to me through centuries. In any case i thought about doing a DNA test because i am too curious, but in any case by mixture i didn’t mean a… Read more »

Genetic results show no admixture since bronze age. I am surprised you doubt your origins because of your look. Different looking from lightest to dark is common in Armenian families. It is wide spread too see a pale skin blue eyed, blond Armenian kid to have darker sibling.

Dear Stella, I cannot agree with some of the statements you make. Current genetic studies actually prove that Armenians in general haven’t experienced admixture for about 4000 years. Tigranes the Great lived only slightly over 2000 years ago. So the admixture events have to be pushed back even further. I actually describe in the above article. All my statements are sourced and you can follow links to the sources where this information comes from. Here is a study that was published in the prestigious European Journal of Human Genetics, the Nature: http://www.nature.com/ejhg/journal/v24/n6/full/ejhg2015206a.html Here western scholars have examined Armenian genetics and… Read more »

why do all of the black women have hair weaves? Can they not be beautiful without that modification?

Beautiful 🌹 Women ❤️, Eve past on her Beauty to all Women ❤️.