A Dutch newspaper “Nieuwe Tilburgsche Courant” has reported on the Armenian massacres with two articles in their 05-28-1915 edition as follows: 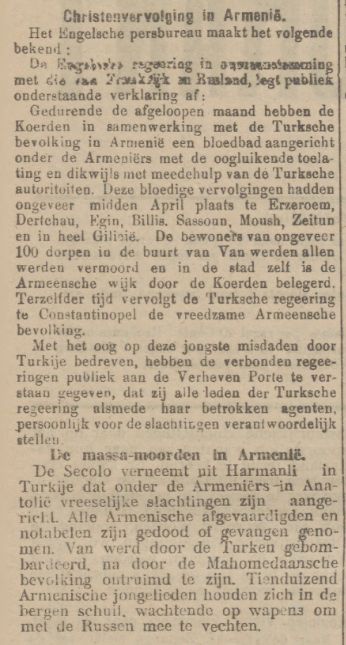 Prosecution of Christians in Armenia.

The British press bureau has announced the following:

The British government along with that of France and Russia have made the following public announcement:

During the past month, the Kurds in collaboration with the Turkish population in Armenia have committed a massacre of the Armenians with the convenient approval and often with the assistance of the Turkish authorities. These bloody persecutions took place around mid April at Erzurum, Dertchau, Egin, Billis, Sassoun, Moush, Zeitun and throughout Cilicia.

The residents of about 100 villages near Van were all murdered and the Armenian neighborhood in the city itself is besieged by the Kurds. At the same time the Turkish government at Constantinople is persecuting the peaceful Armenian population.

In view of these recent crimes committed by Turkey, the governments have united and publicly announced to the Sublime Porte (central government of the Ottoman Empire) that they hold all members of the Turkish government and its officers involved, personally responsible for the massacres.

The mass-murders in Armenia.

The “Secolo” learns from Harmanli in Turkey, that terrible massacres have been committed against Armenians in Anatolia. All Armenian deputies and notables have been slain or imprisoned. Van was bombed by the Turks, after the Muslim population has been evacuated. Ten thousand young Armenian people are hiding out in the mountains, waiting for weapons to fight along with the Russians.

We humans have proven time and time again for thousands of years that we are incapable of governing ourselves in the long term! Come QUICKLY, Lord Jesus, and please cleanup up this MESS we have made!! smh

[…] of Van, where over 55.000 Armenian civilians were massacred by Ottoman militias and bandits, was extensively discussed in newspapers of that time around the world. The resistance occupies a significant place in Armenian national […]