During various periods in the ancient Rome, several “mystery” cults and their deities of Near Eastern character became highly popularized. Through Roman expansion into the east, Roman society came in contact with many Near Eastern and Middle Eastern religions and started to worship some of the deities in their own fashion.

Maybe the most famous deity of Eastern character was Mithras who anciently was known in Armenia by the name of Mihr and Mher. During Roman expansion into Armenian Highlands Roman officials frequently encountered Armenian religious practices and Armenian King Tiridates who was a Mithraic priest himself is believed to have been instrumental in the spread of the cult of Mithras among Roman elite. Encyclopedia Britannica recounts:

When Tiridates of Armenia acknowledged the Roman emperor Nero as his supreme lord, he performed a Mithraic ceremony, indicating that the god of contract and of friendship established good relations between the Armenians and the mighty Romans. 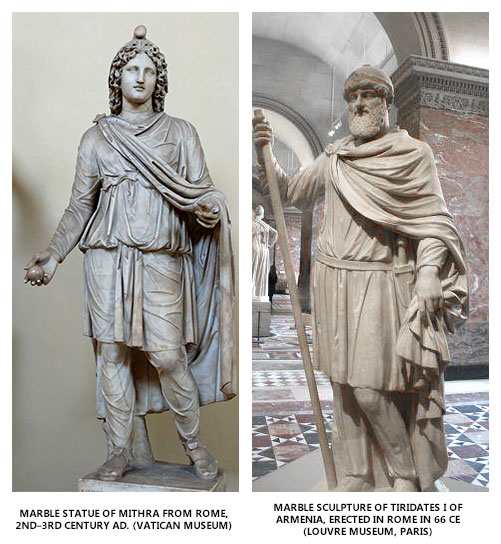 Another famous mystery deity of the Roman empire was Jupiter Dolichenus, who became extremely popular during the 2nd and 3rd centuries AD in Rome and Roman colonies such as the British isles and parts of Germany. It is from the city of Doliche that the epithet ‘Dolichenus’ “of Doliche” was adopted for Jupiter Dolichenus. Doliche is an ancient settlement in the Armenian Highlands near Gaziantep in modern day Turkey. As explained in the previous post about the recent discovery of a probable statue of Vahagn, the territory had a very ancient Armenian presence and this is also visible in the imagery of Jupiter Dolichenus.

In the Roman mystery religion he was recognized as a god of the heavens but also believed to control military success and safety. He was usually represented standing on a bull and carrying his special weapons, the double ax and the thunderbolt. Both Mithras and Jupiter Dolichenus were often depicted wearing eastern attire. The same attire including the Mithraic cap the Romans associated with Armenians as can be seen from several Roman statues of Armenian kings.

Jupiter Dolichenus derives its origins from a local storm god known to the Hurrians as Teshub, to Hittites as Tarhun, to Hattians as Taru and to Armenians of the Urartian period as Teisheba/Theispas. According to Encyclopedia Britannica Jupiter Dolichenus is a:

“god of a Roman mystery cult, originally a local Hittite-Hurrian god of fertility and thunder worshiped at Doliche (modern Dülük), in southeastern Turkey.”

The significance of this deity has been subject to much speculation and connections between Teshub/Tarhun/Taru and the Norse thunder god Thor and its Celtic equivalent Taranis has been argued for.  Interestingly the son of Teshub was a mountain deity Sarruma whose name is translated as “the king of the mountains”. It contains the Armenian word “Sar” which means “mountain”. Teshub was later also identified with Aramazd/Ahura Mazda. Some have even suggested a connection with the Orion constellation that seems to resemble the posture of this deity (as seen bellow). Although this remains a speculation it’s nevertheless a thought provoking observation. 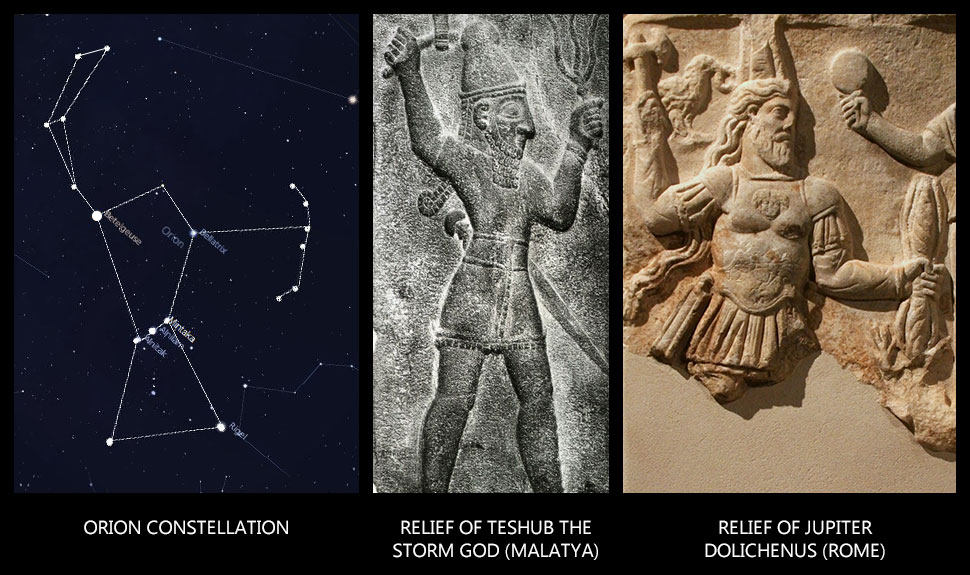 Maybe the most iconic imagery that to Romans represented Armenia at the time was a specific type of headgear called the Armenian Tiara worn by the Armenian monarchs of the time. We can see it on Roman coin and statuettes symbolizing Armenia.

There are many images of Jupiter Delichenus scattered throughout the territories of the Roman empire, but they are all similar in their likeness to the deity Teshub/Theispas/Tarhun from the Armenian Highlands.

Considering that Teshub/Theispas/Tarhun was anciently venerated by the Armenian ancestors, the city of Doliche itself was often part of the Armenian kingdom, and Armenian religious practitioners have often been in contact with Rome it is therefore not at all surprising to see occasional depictions of Jupiter Dolichenus wearing an Armenian tiara or attire attributed to Armenian style. See bellow more examples of Jupiter Dolichenus wearing an Armenian tiara: 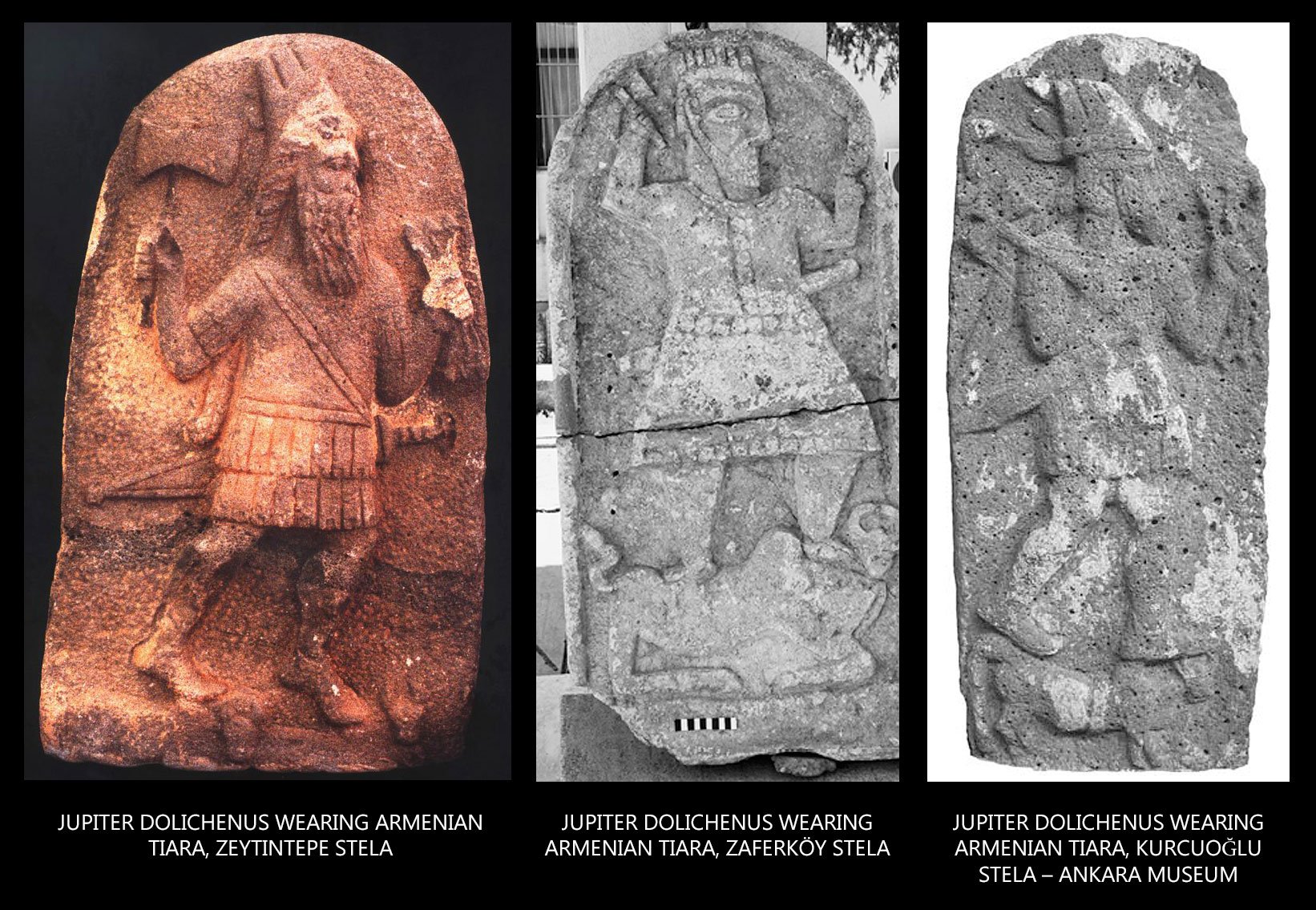 It should be clear by now that to ancient Romans the imagery of Jupiter Delichenus had a very distinctive Armenian character connecting the deity all the way back to more ancient times when Teshub/Teisheba/Tarhun was venerated by the people of the Armenian Highlands.

yes?and you are satanson? I didn’t say that but the whole world must know

Ancient Egyptians were closer to Armenians than to Africans; a new genetics study reveals - PeopleOfAr