Home  >  History • Literature  >  Herodotus about trade between Armenia and Babylon

The Greek historian Herodotus (c.a. 450 BC) in his work “The Histories”: I:194 provides some details on trade between Armenia and Babylon:

But the greatest marvel of all the things in the land after the city itself, to my mind is this which I am about to tell: Their boats, those I mean which go down the river to Babylon, are round and all of leather: for they make ribs for them of willow which they cut in the land of the Armenians who dwell above the Assyrians, and round these they stretch hides which serve as a covering outside by way of hull, not making broad the stern nor gathering in the prow to a point, but making the boats round like a shield: and after that they stow the whole boat with straw and suffer it to be carried down the stream full of cargo; and for the most part these boats bring down casks of palm-wood filled with wine. The boat is kept straight by two steering-oars and two men standing upright, and the man inside pulls his oar while the man outside pushes. These vessels are made both of very large size and also smaller, the largest of them having a burden of as much as five thousand talents’ weight; and in each one there is a live ass, and in those of larger size several. So when they have arrived at Babylon in their voyage and have disposed of their cargo, they sell by auction the ribs of the boat and all the straw, but they pack the hides upon their asses and drive them off to Armenia: for up the stream of the river it is not possible by any means to sail, owing to the swiftness of the current; and for this reason they make their boats not of timber but of hides. Then when they have come back to the land of the Armenians, driving their asses with them, they make other boats in the same manner. 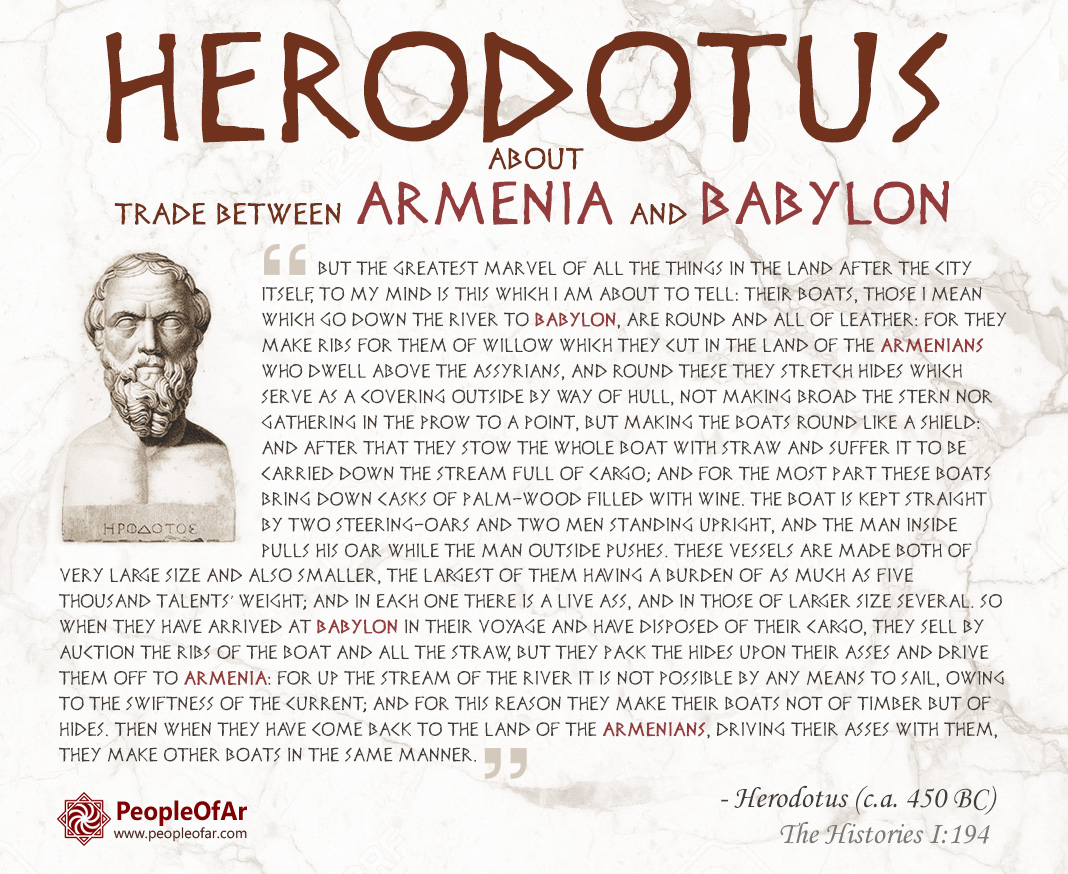 […] (c.a. 450 BC) in his work “The Histories”: I:194 provides some details on wine trade between Armenia and Babylon. He describes how the Armenian wine merchants fashioned circular “shield”-shaped boats by […]