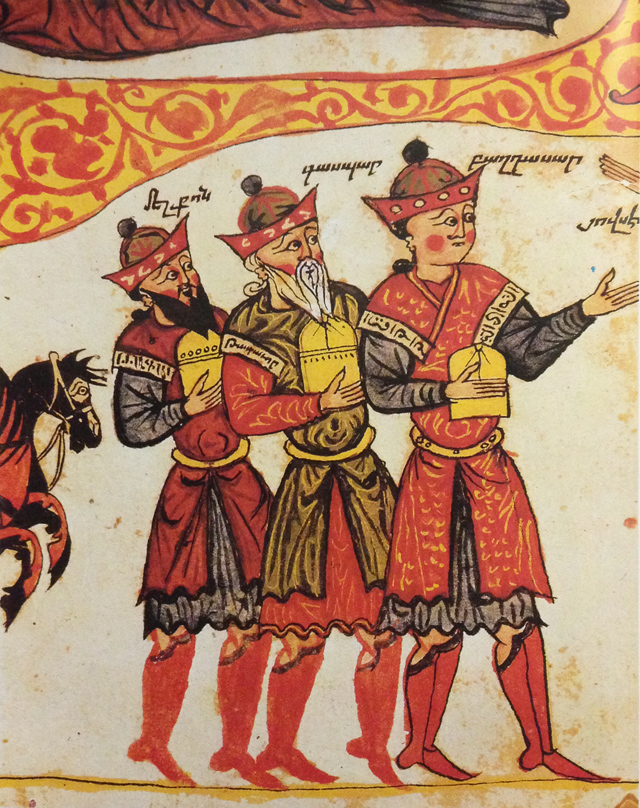 It is frequently asked as to why Armenians do not celebrate Christmas on December 25th with the rest of the world. Obviously, the exact date of Christ’s birth has not been historically established—it is neither recorded in the Gospels. However, historically, all Christian churches celebrated Christ’s birth on January 6th until the fourth century. According to Roman Catholic sources, the date was changed from January 6th to December 25th in order to override a pagan feast dedicated to the birth of the Sun which was celebrated on December 25th. At the time Christians used to continue their observance of these pagan festivities. In order to undermine and subdue this pagan practice, the church hierarchy designated December 25th as the official date of Christmas and January 6th as the feast of Epiphany. However, Armenia was not effected by this change for the simple fact that there were no such pagan practices in Armenia, on that date, and the fact that the Armenian Church was not a satellite of the Roman Church. Thus, remaining faithful to the traditions of their forefathers, Armenians have continued to celebrate Christmas on January 6th until today.

In the Holy Land: January 18th

In the Holy Land, the Orthodox churches use the old calendar (which has a difference of twelve days) to determine the date of the religious feasts. Accordingly, the Armenians celebrate Christmas on January 18th and the Greek Orthodox celebrate on January 6th.

On the day before Armenian Christmas, January 17th, the Armenian Patriarch together with the clergy and the faithful, travels from Jerusalem to the city of Bethlehem, to the Church of Nativity of Christ, were elaborate and colorful ceremonies take place. Outside, in the large square of the Church of Nativity, the Patriarch and his entourage are greeted by the Mayor of Bethlehem and City officials. A procession led by Armenian scouts and their band, advance the Patriarch into the Church of Nativity, while priests, seminarians and the faithful join in the sing of Armenian hymns. Afterwards, church services and ceremonies are conducted in the Cathedral of Nativity all night long and until the next day, January 18th.

The dates for the observance in Jerusalem are incorrect. The Armenian Patriarchate observes Eve of the Nativity on January 18 (not 17) and the Feast of the Nativity and Epiphany on the 19th. There are 13 days difference between Julian and Gregorian Calendars. Armenians in Jerusalem observe “Armenian Christmas” on January 6, using Julian Calendar which is January 19th in the Gregorian calendar, hence the difference. Greeks, Russians etc… celebrate Christmas on December 25, using Julian calendar which falls on January 7 in Gregorian calendar. All churches except the Armenian church celebrate Christmas on December 25. Some using Gregorian Calendar… Read more »