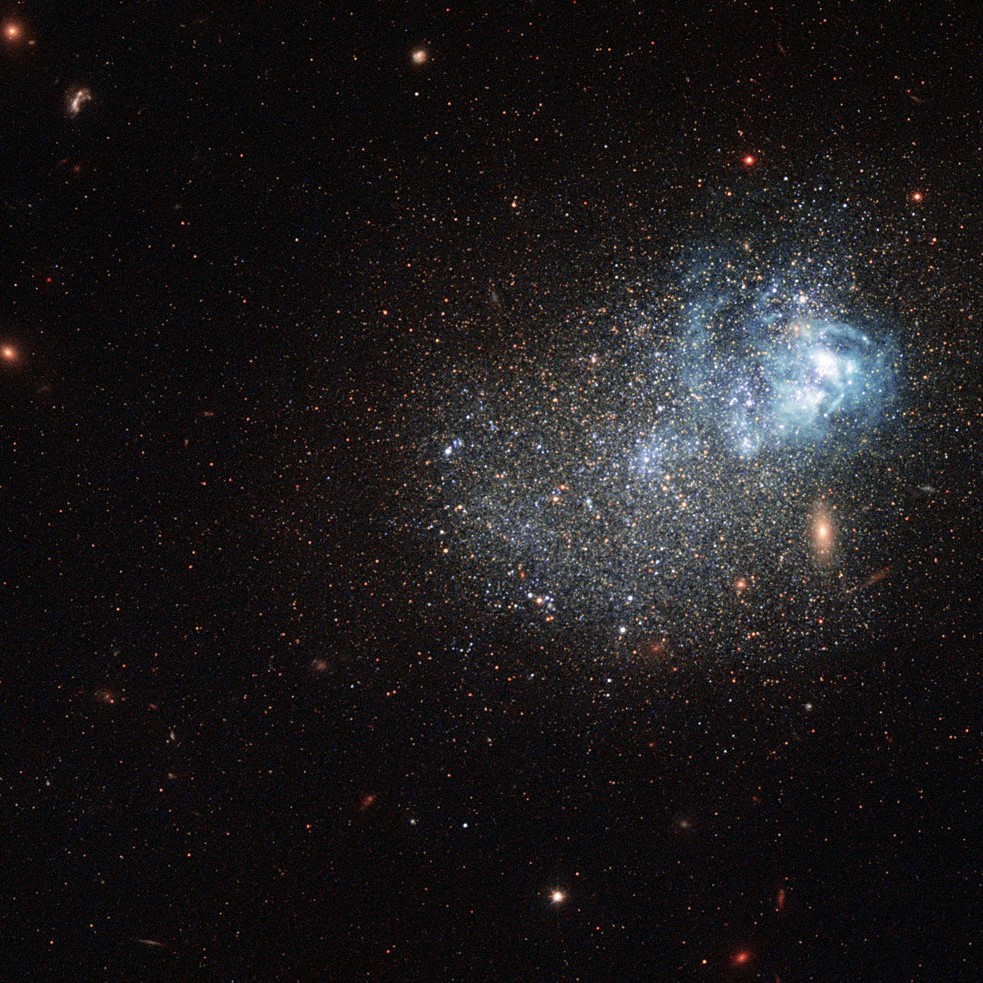 The Discovery Channel posted today an interesting “photo of the day” on their Facebook page. It’s a picture as seen by the Hubble telescope of a galaxy known as the Markarian 209. Now why does a galaxy have such an Armenian name? Let’s examine.

Markarian 209 is a part of a whole group of bright Markarian Galaxies. They belong to a class of galaxies with a bright center that radiates an excessive amounts of ultraviolet. They are named after their discoverer, a renown Armenian astrophysicist Beniamin Markarian (1913-1985) who in 1965 first discovered these galaxies at Byurakan Astrophysical Observatory in Armenia.

Beniamin Markarian was considered one of the greatest observing astronomers of the 20th century. He worked at the Byurakan Observatory since 1946 on theories of star-formation, clusters and super-clusters. He studied star associations and published the first systematic catalog of OB associations. For his work in 1950 he was awarded the prestigious Soviet Stalin Prize along with his colleague Victor Ambartsumian. He went on to discover the Markarian Galaxies in the 1960s and published a catalog of 1469 galaxies called Markarian catalog (First Byurakan Catalogue of Markarian galaxies). Markarian also discovered a string of galaxies moving with a common motion. Named after him the Markarian’s Chain is a stretch of galaxies that are part of the Virgo Cluster. It is called a chain because, when viewed from Earth, the galaxies lie along a smoothly curved line. Markarian has received many honors during the course of his career.

Between 1965 and 1989 up to 1515 Markarian Galaxies have been identified by the First Byurakan Survey. In 2005, the Second Byurakan Survey was carried out, extending the survey to fainter objects, making a catalog of total 3563 objects, 1863 of which are galaxies and 1700 stars.

Found this site quite by accident. I found a wealth of information about our motherland, Armenia, and it’s glorious albeit sometimes past sad history. Nowadays, the Only threat to our Armenia comes Not from our foes, but from our greedy Oligarchs. For some Armenians, Armenia = Yerevan, meaning, all the resources are spent on the capital, whereas the other cities are nothing but dirt roads and dilapidated buildings. OK, enough complaining, good job my fellow Armenian compatriot.
Preston Bagrationi

Yes. It is a wonderful site. Found by accident also. Since I am a catastrophist I have come across the Markarian galaxy description. Hopefully the stellar formations will be described as electrically formed in future astrophysical texts.

[…] objects, cometary nebulae and thousands of galaxies. Some of the more famous once, “Markarian Galaxies“, were discovered by the Armenian astrophysicist Beniamin Markarian (1913-1985). He was […]