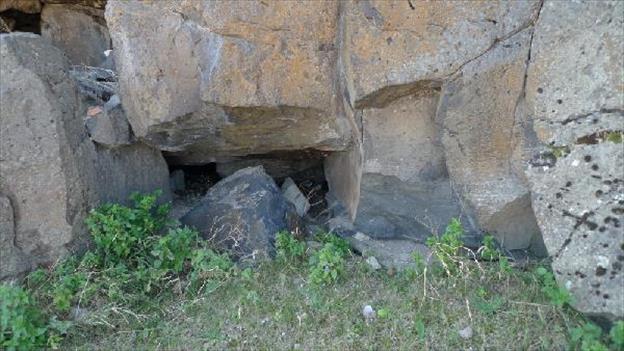 Turkish archaeologists have recently published discoveries made underneath the ancient Armenian capital city of Ani. Receding water has revealed an opening to a comprehensive network of tunnels dug beneath the ancient city located in present day Turkish province of Kars. Once a powerful city the capital of the Armenian kingdom of the Bagratuni dynasty, Ani today stand abandoned and desolate. At its zenith Ani rivaled the likes of Constantinople, Baghdad and Cairo in size and influence. By the 11th Century Ani had grown to over one-hundred-thousand people. Renowned for its splendor and magnificence, Ani was known as “the city of 40 gates” and “the city of 1001 churches.” It would later become the battleground for various contending Empires, leading to its destruction and abandonment. Today Ani largely remains a forgotten ancient ghost town in modern day Turkey.

According to Yazıcı these discoveries have been inspired by George Gurdjieff‘s writings who in 1886, with his companion Pogossian, has visited the ruins of Ani and discovered some passageways with rotten furniture, pottery and a pile of parchments in monks chambers. Although Gurjieff was fluent in Armenian (being born in Armenia himself), he could not comprehend the words on these scrolls as they were written in the Old Armenian (commonly known as Grabar). Gurdjieff remained intrigued by these parchments which upon deciphering revealed a mentioning of an ancient esoteric brotherhood that sparked his imagination. Yazıcı said Gurdjieff was the first person to mention the monastery that was located under the Ani Ruins. Read his accounts -> HERE

Bellow some pictures taken by the researchers:

Reblogged this on Kira Moore's Closet and commented:
Interesting!

Thank you very much – we have been studying Ani and Gurdjieff for many years …. .

you are simply a fool

very interesting. Thanks for posting!

The skeletons of two women who lived some 3,000 ye

If it wasn’t already apparent that #UNESCO is a