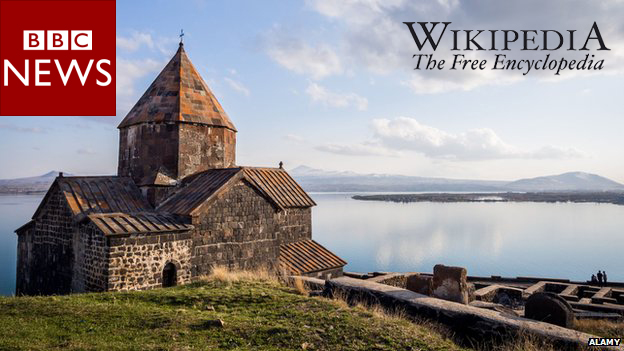 “Armenians are being urged to do their patriotic duty – by each writing an article on Wikipedia. The national campaign – One Armenian, One Article – aims to raise the number and quality of articles and promote the culture.” BBC reports.  High profile artists, musicians and politicians are getting in on the act too. Education minister Armen Ashotyan says in the clip: “One Armenian, one article – I will definitely do that and believe you will too.”  The campaign began with a YouTube video, but is now being promoted to worldwide audiences on Armenian satellite TV channels.

BBC first reported on this campaign and it seems it was picked up by other major media outlets like The Guardian and Newsweek (see links bellow). It’s a great opportunity and a great cause for us to participate in. While the campaign aim at writing in Armenian, I see now reason why we shouldn’t get involved in editing or writing about Armenian culture and history in other languages as well. Let’s all participate and get involved in Wikipedia by helping with edits, or writing new articles. I will be writing my article soon and will share it with you.

Smorgasbord - Variety is the Spice of Life.

Reblogged this on Smorgasbord – Variety is the spice of life and commented:
What a great idea – a way to bring people together, show pride in their country and perhaps change the world’s perspective of a country based on what is projected in the media. A lesson in how to give a voice to the people.

This is a fabulous idea, especially for those of us who know little about the Armenian culture. Thanks for sharing.