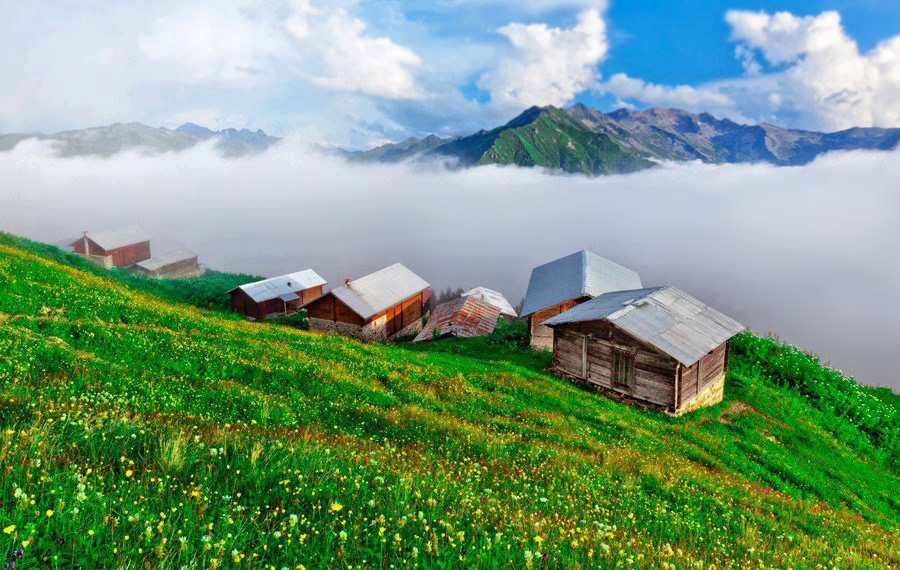 Hamshen is the Armenian name for the settlement in historic Lesser Armenia, present day Hemşin district in the province of Rize, Turkey. Territory of Lesser Armenia was historically part of the ancient Armenian Kingdom, which was ruled by the royal dynasty of Orontids (Yervanduni). In later centuries lesser Armenia was conquered by numerous contending empires until it became a part of the Byzantine empire.

The origin of the Hamshen settlement is attributed to the princely house of Hamam of the Amatuni dynasty from Ardaz, in Northern Vaspurakan. Vaspurakan spanned between Lake Van (in Turkey) and Lake Urmya (in Iran). It was considered the heartland of the Armenian Kingdom for many centuries. The Amatuni family is one of the oldest Armenian Princedoms in the Ardaz region. They were very proud and courageous people specialized in agriculture and architecture.

In the 8th century, Prince Hamam and his father Prince Shabuh Amatuni were forced to leave their lands in Artaz (Vaspurakan) under the pressure of the Arab Invasion. The 2 Princes along with their priests, people and soldiers moved to the Black Sea Region of historic Lesser Armenia, where they settled in the destroyed City of Tambur and its surrounding villages (currently Hemshin and ChamliHemshin). Prince Hamam rebuilt the city of Tambur and called it Hamamshen and over the years Hamamshen became Hamshen in Armenian and eventually Hemşin in Turkish. Hamam’s people were known as Hamshentsi (and later Hemşinli in Turkish). Like many Armenian settlements Hamshen contains the suffix -shen from Armenian word “shenel” meaning “to build”. Hamshen like Artashen, Bagratashen, Norashen and so on, simply means “Build by Hamam”.

Until the 14th century, Hamshen was a Christian principality ruled by Armenian princes. Almost each village had its Church and priests. The following centuries however the region witnessed a lot of bloodshed, forced conversion and migration under the Ottoman rule. Nevertheless, Hamshen remained a significant intellectual center until the 17th century with high activity of manuscript illumination and the practice of science.

Many of the Hamshentsi people have (often forcefully been) converted to Islam. Ottoman records show that Hamshen was overwhelmingly Christian until the late 1620s. Starting in the 1630s, the Hamshen Armenian diocese began to decline while one of the first mosques in the area was built in the 1640s. Conversion to Islam seems to have taken place gradually. But Hamshentsi are not all Muslim people. About half of the Hamshentsi population is in fact still Christian today belonging to the Armenian Apostolic Church. During the Armenian Genocide most Christian Hamshentsi have been prosecuted and expelled. They reside today mostly in Abkhazia, Georgia and Southern Russia (Krasnodar, Sochi, Adler). Muslim Hemshentsi have also suffered during this period and some were even mistaken for Armenians because of their language and killed. As a consequence two separate communities of Muslim and Christian Hamshentsi have since lived in separation. Those in Turkey have been brought up without the awareness of their Armenian identity but retained much of their old traditions and to date speak an Armenian dialect, while those in the Soviet Union where able to retain their Armenian identity. After the breakup of the Soviet Union and an increased openness in Turkey, both communities have made successful attempts of mutual contact and understanding. Today many cultural exchanges take place and there is an increased interest from both sides.

Hovann H. Simonian (2007), The Hemshin: History, Society and Identity in the Highlands of Northeast Turkey

Redgate, Anne Elizabeth. “Morale, Cohesion and Power in the First Centuries of Amatuni Hamshen”, in The Hemshin, pp. 3-13

Reblogged this on White Lies.