Armenian Highland is distinguished with countless ancient cave dwellings, dating far back into history of human settlement. Discoveries in the Areni cave complex in Armenia yielded phenomenal finds such as the discovery of the world’s oldest leather shoe (5,500-year-old), oldest wine making facility (6,100-year-old), a straw skirt dating to 3900 BC, singes of animal domestication and even a well preserved human brain. There is almost every kind of cave in Armenia, there are man made caves and even caves of hydrothermal origin, which are very rare in the world. These hollows originate when lava from the inner core of the earth mixes with hot springs, creating caves.  We also know that people themselves created caves. Elaborate and often architecturally magnificent, monastery complexes with entire villages, carved out of rock, are found in abundance on the Armenian plateau. Armenians used caves as fortresses, places of worship, as housing, as storage facilities and as shed for the animals. Because of minimal airflow, these caves are warm in winter and cool in summer. Armenian cave-dwellings were well known to the ancient classical writers. Xenophon during his journey in Armenia describes an Armenian village as follows:

“Their houses were under ground, the entrance like the mouth of a well, but spacious below; there were passages dug into them for the cattle, but the people descended by ladders. In the houses were goats, sheep, cows, and fowls, with their young; all the cattle were kept on fodder within the walls. There was also wheat, barley, leguminous vegetables, and barley-wine, in large bowls.”[1]

Living in caves was common during the entire Armenian history. Such caves were used as dwellings in Armenia until the 1960s. Today, in the villages of Tegh and Khndzoresk in the Syunik marz, caves are still used as cellars and cow-sheds.

Mr. Curzon in his Armenia 1842 (cf. Taylor’s N.) gives a detailed account of the construction of these cave houses in Armenia.

“First a site is selected on the side of a gently sloping hill. Then a space as large as the proposed house is excavated. This is divided off into quarters for the stock and rooms for the family by walls and rows of wooden columns, eight or nine feet high. Over these large branches of trees are laid, with a thick layer of smaller branches and twigs on top. Then a large part of the earth taken out in the excavation is spread above, and a layer of turf completes the roof. The houses are now entered through door-ways on the lower side, which is built up four or five feet above the grade of the slope.”[2]

In his book “Discoveries among the ruins of Nineveh and Babylon : with travels in Armenia, Kurdistan, and the desert…” published in 1859 Sir Austen Henry Layard recounts his discoveries in Asia Minor and Middle east. In one of his passages Layard recounts some of ancient Armenian cities he encounters on his journey. Among many he recalls Khelath (Ahlat):

The lofty perpendicular rocks rising on both sides are literally honeycombed with entrances to artificial caves, ancient tombs, or dwelling-places. On a high isolated mass of sandstone stand the walls and towers of a castle, the remains of the ancient city of Khelath, celebrated in Armenian history, and one of the seats of Armenian power. I ascended to the crumbling ruins, and examined the excavations in the rocks. The latter are now used as habitations, and as stables for herds and flocks.

The cave monastery of Geghard is another unique architectural construction in Armenia (Kotayk province), being partially carved out of the adjacent mountain, surrounded by cliffs. It is listed as a UNESCO World Heritage Site. The monastery complex was founded in the 4th century by Gregory the Illuminator at the site of a sacred pagan spring inside a cave, holding one of Armenia’s purest water-springs. The monastery of Geghard contains a number of cave churches and tombs, most of them cut into rock.

Some cave-dwellings found throughout the Armenian plateau are distinguished with a stone door. The Speleological Center of Armenia has discovered more than 160 man-made structures carved into rocks and caves that were inhabited in the area from Talin to Ashtarak and Araler-Aragats. They differ from other man-made caves in other regions of Armenia with regard to the stone doors. Caves with stone doors have a cave-hall, a stone door and a secret entrance, in the form of a tunnel with specific masonry. They were mainly used as hidden storehouses for the food of small groups of people or communities. Only a few trusted people had access to these reserves.  At the end of the tunnels, there were stone-doors that swung inward.

These doors were a fundamental feature of the caves. If there was a hidden tunnel, there was always  a stone door at the end. The stone doors had pegs near the top that fit into specially carved holes in the frames. Both doors and frames were well-finished. Even today, these doors can be opened and closed. It is unknown when these doors were built, but by the 18th century, they had no practical use anymore. Ancient Armenian writers wrote about them as amazing, unusual structures granted to humans by mythical giants. According to the Speleological Center, caves with such stone doors are often found in the Aragatsotn marz. But there are no rock-carved churches in this region, and the churches that were built from the 5th to the 16th centuries don’t have stone doors. Thus, they conclude that such stone door caves are related to a pre-Christian culture.[3] 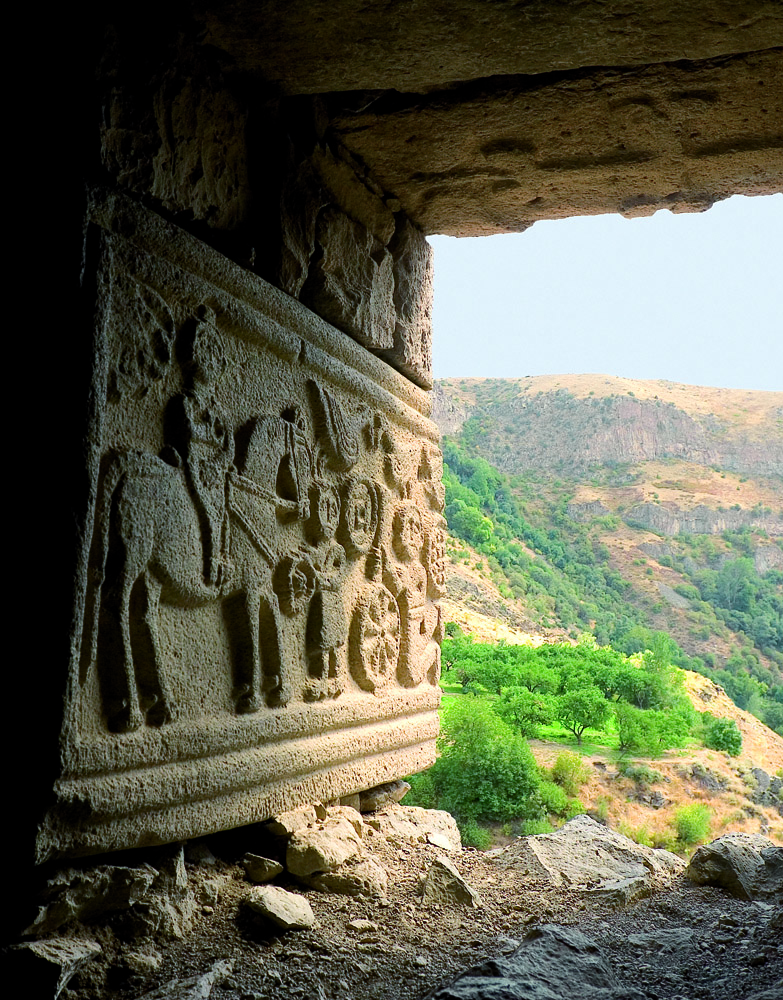 Reblogged this on White Lies and commented:
Beautiful

Reblogged this on Notes of a Spurkahye Finally Come Home and commented:
I’ve only been to the Khndzoresk as of yet, other than Geghart… Got the rest on my list 😀

Amazing. I visited Geghard and Goris – but I didn’t knew there was so much more caves to discover.

Superb work of great archaeological value !!! Amazed by the the Monastery of the Holy Virgin Mary (5th Century) on the cliff ! Much Kudos,my friend 🙂

Thank you so much for constructing this website…
Unbelievable beauty!!!