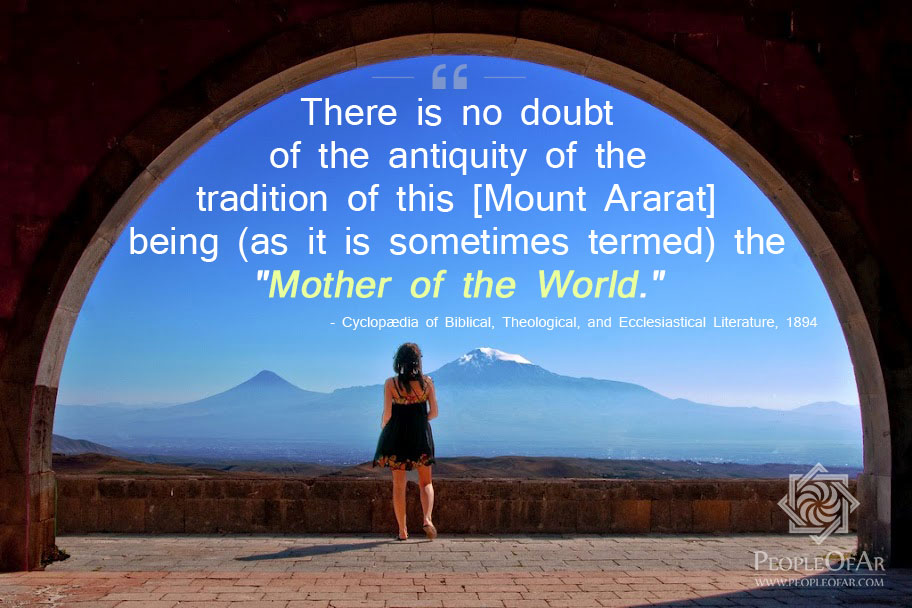 Mount Ararat is a snow-capped, dormant volcanic cone in what used to be ancient Armenian region known as Ararat (modern day eastern Turkey). Mount Ararat has been revered by Armenians since times immemorial. According to ancient legends Armenian deities reside inside the mountain. Both peaks have separate names in Armenian, the smaller one is called “Sis” and the larger is known as “Masis”. The plural ‘Masiq’ may refer to both peaks. Historically the name derives from the king Amasya, the great-grandson of the Armenian patriarch Hayk, who is said to have called the mountain Masis after his own name (Thomson, 1978, p. 90-98.). According to Biblical traditions Mount Ararat is the place of Noah’s descend. Ancient (pre-Christian) records attest to the legends of the Ark resting on a certain Armenian mountain.

The ark first came aground on the mountain of Ararat, in Armenia, a sacred spot to this day; and here God made His covenant with Noah, renewing His first blessing to Adam, permitting the use of animal food; promising that the course of nature should never be disturbed again till the end of all things, and making the glorious tints of the rainbow, which are produced by sunlight upon water, stand as the pledge of this assurance. Of man He required abstinence from eating the blood of animals, and from shedding the blood of man, putting, as it were, a mark of sacredness upon life-blood, so as to lead the mind on to the Blood hereafter to be shed.

In their Encyclopedia of Biblical, Theological, and Ecclesiastical literature (1894), John McClintock and James Strong describe Ararat as follows:

There is no doubt of the antiquity of the tradition of this [Mount Ararat ] being (as it is sometimes termed) the “Mother of the World.” 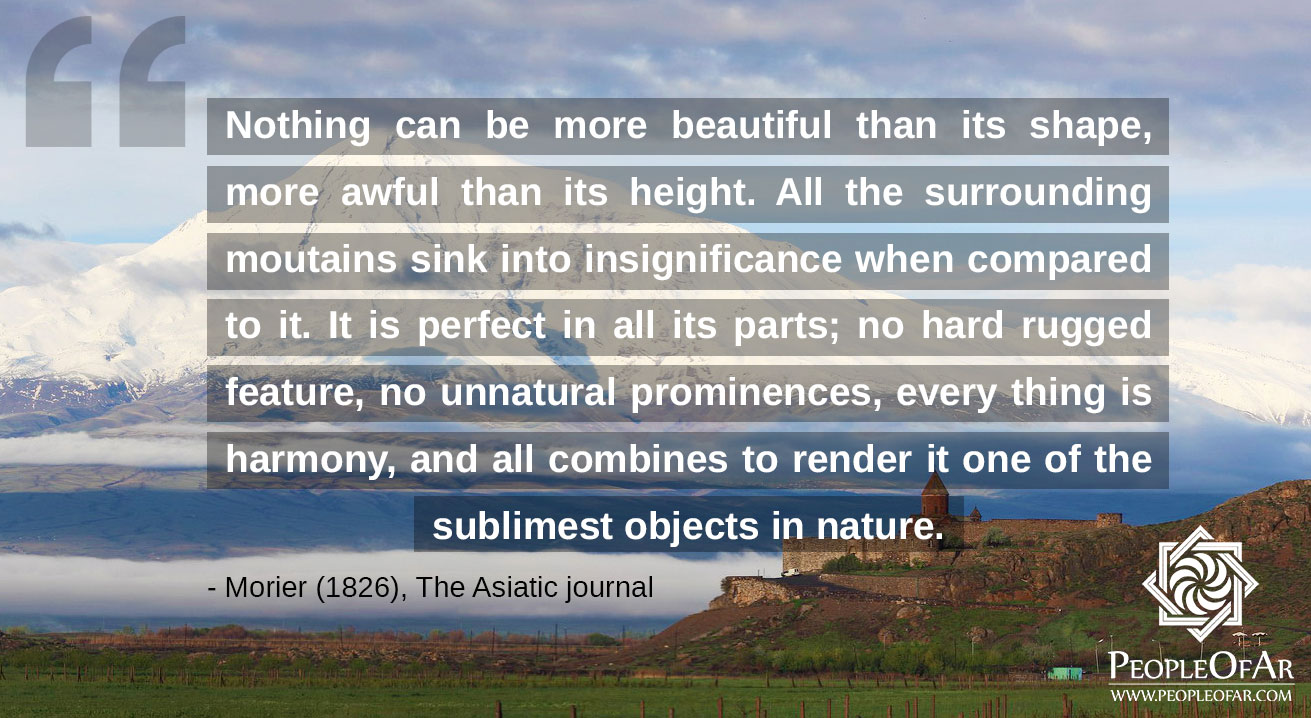 Smith and Dwight (1833) too recognized the beauty of Ararat with the following passage from McClintock & Strong:

The mountain thus known to Europeans as Ararat consists of two immense conical elevations (one peak considerably lower than the other), towering in massive and majestic grandeur from the valley of the Aras, the ancient Araxes. Smith and Dwight give its position north 57° west of Nakhchevan, and south 25° -west of Erivan (Researches in Armenia, p. 2G7) and remark, in describing it before the recent earthquake, that in no part of the world had they seen any mountain whose imposing appearance could plead half so powerfully as this a claim to the honor of having once been the stepping-stone between the old world and the new. ‘

It appeared,” says Ker Porter, “as if the hugest mountains of the world had been piled upon each other to form this one sublime immensity of earth, and rocks, and snow. The icy peaks of its double heads rose majestically into the clear and cloudless heavens; the sun blazed bright upon them, and the reflection sent forth a dazzling radiance equal to other suns. My eye, not able to rest for any length of time upon the blinding glory of its summits, wandered down the apparently interminable sides, till I could no longer trace their vast lines in the mists of the horizon ; when an irrepressible impulse immediately carrying my eye upward again refixed my gaze upon the awful glare of Ararat” (Trav. i, 182 sq. ; ii, G3G sq.).

To the same effect Morier writes :

“Nothing can be more beautiful than its shape, more awful than its height. All the surrounding mountains sink into insignificance when compared to it. It is perfect in all its parts; no hard rugged feature, no unnatural prominences; every thing is in harmony, and all combines to render it one of the sublimest objects in nature” (Journey, c. xvi; Second Journey, p. 312).

Bellow some beautiful pictures of Ararat: 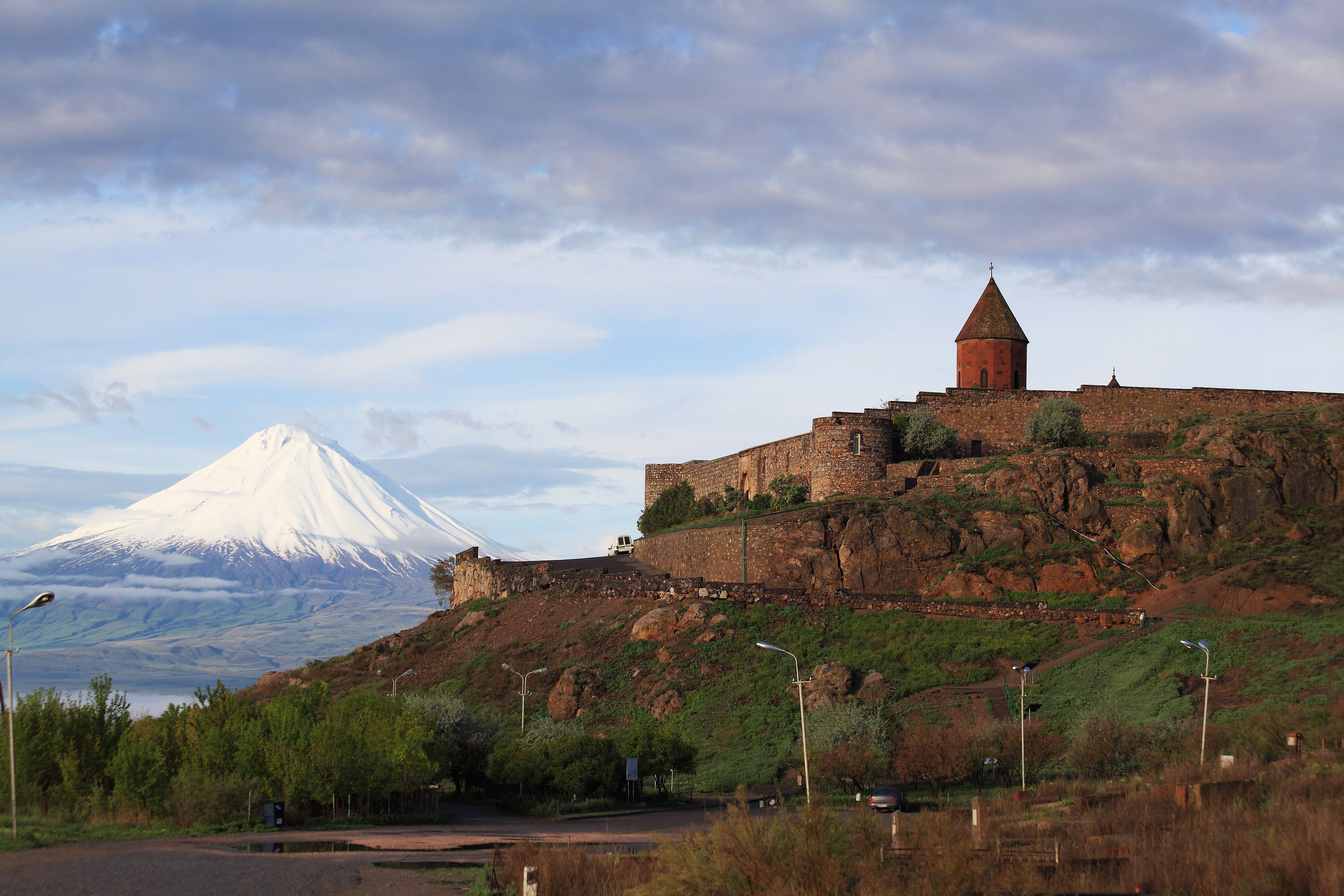 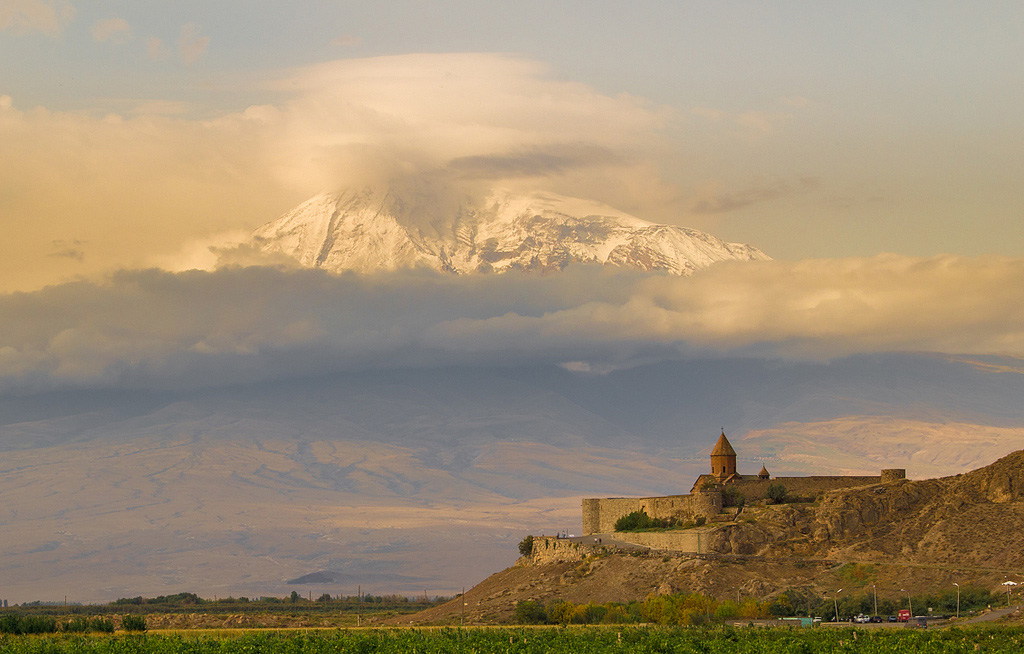 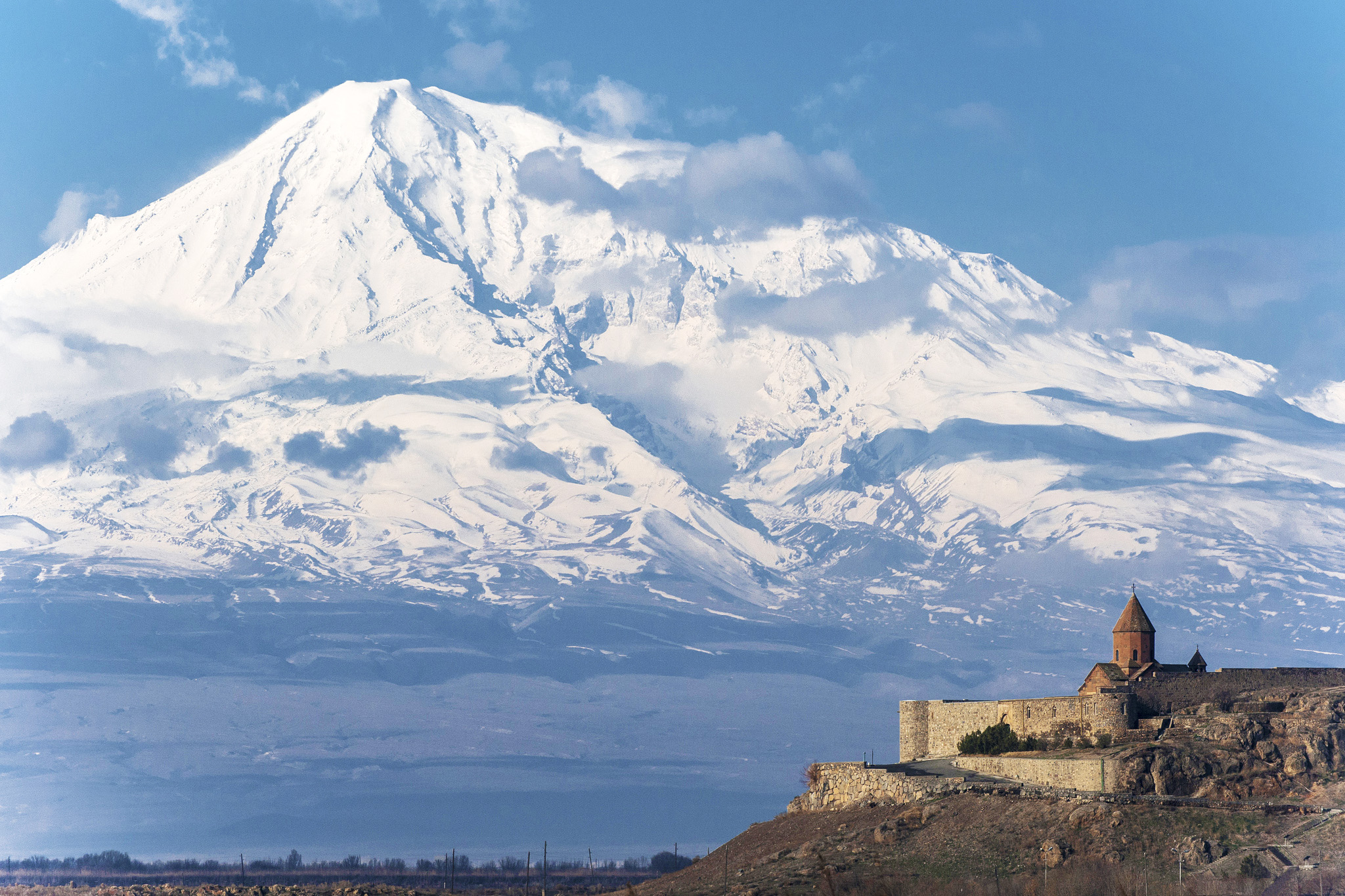 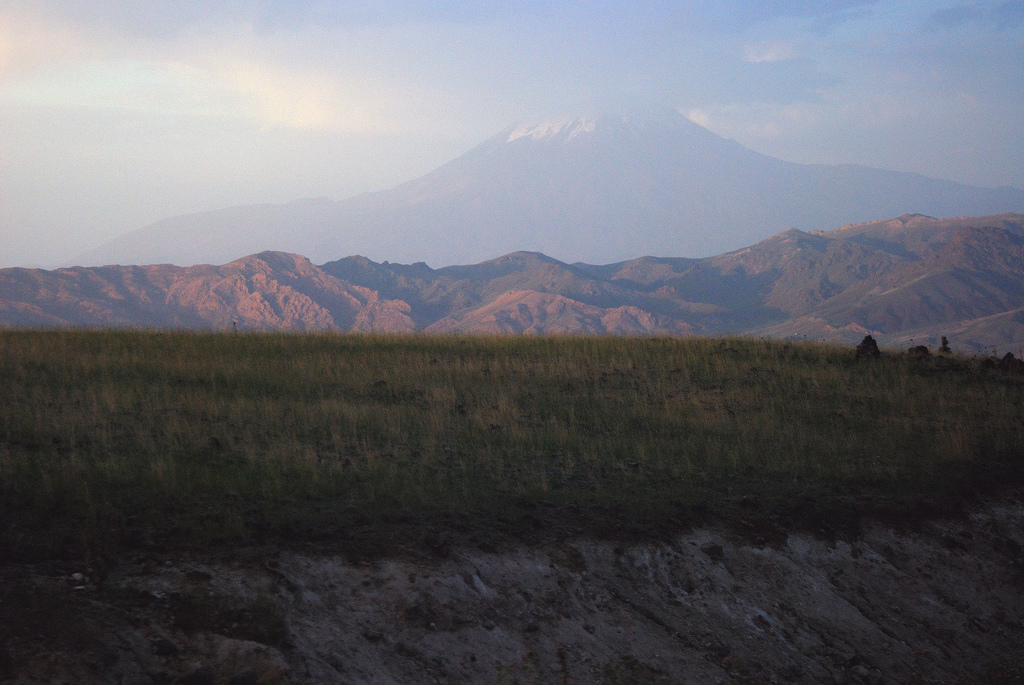 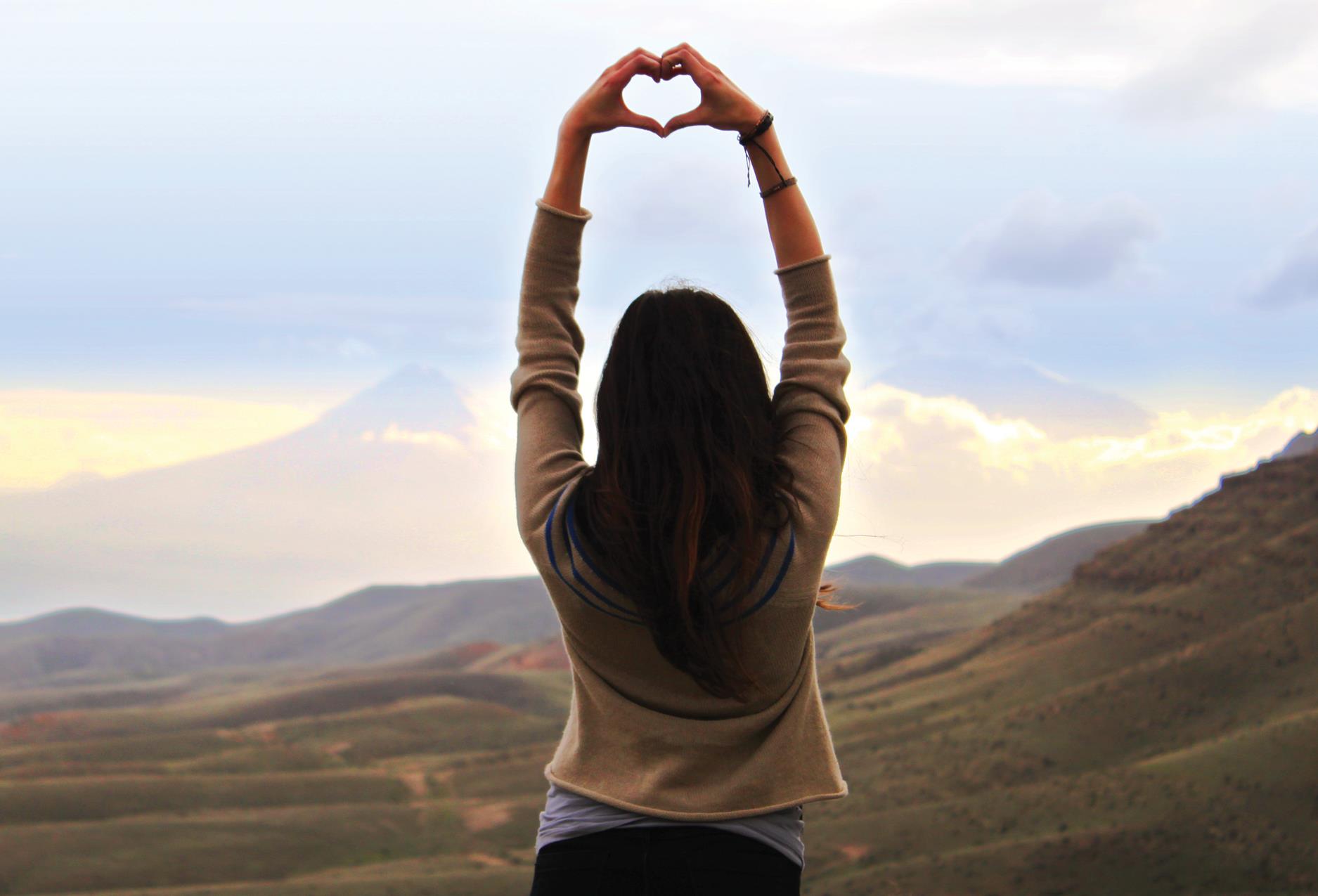 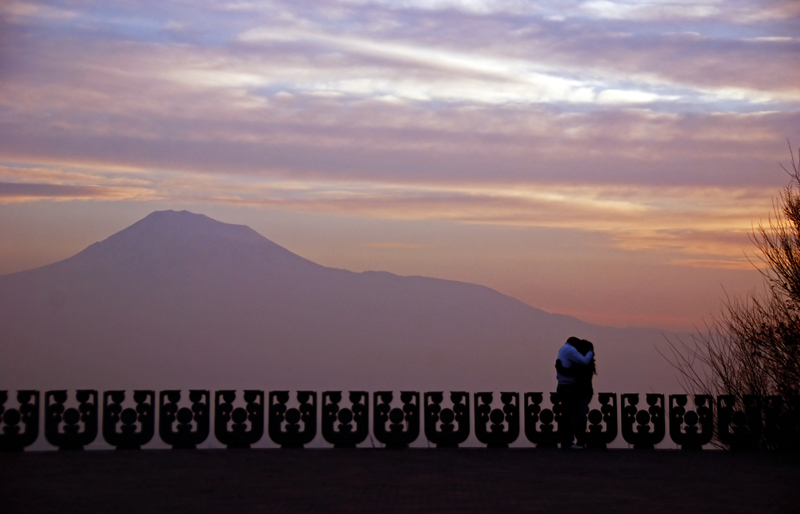 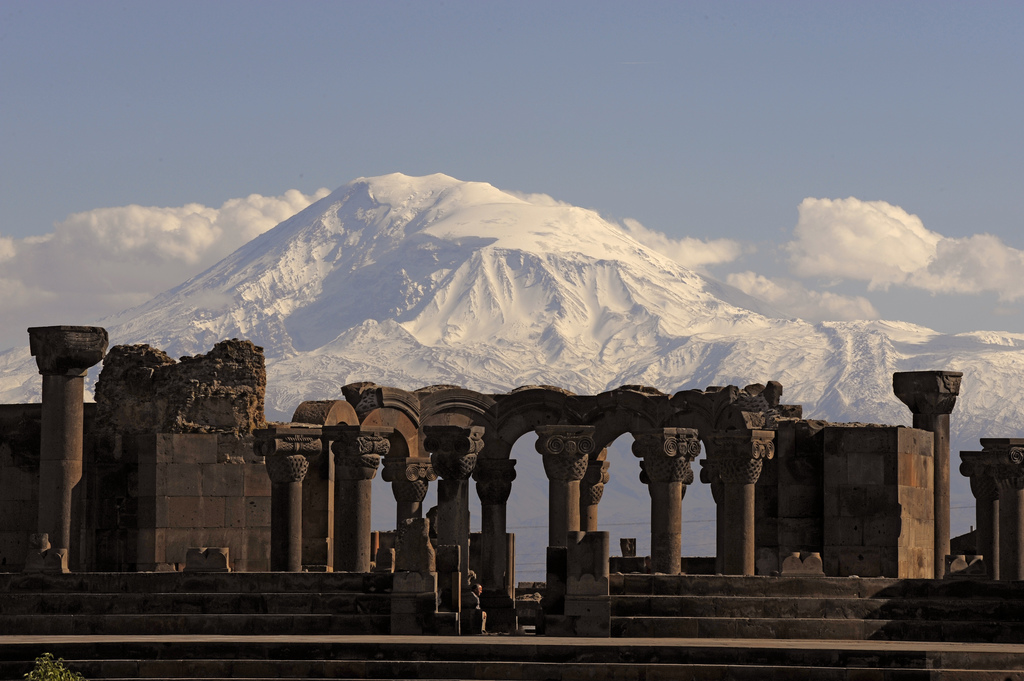 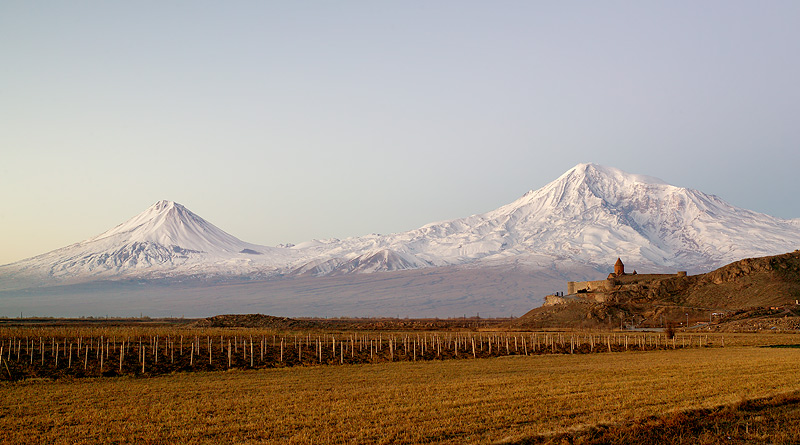 2) E. Smith,  H. G. O. Dwight (Harrison Gray Otis) (1833), Researches of the Rev. E. Smith and Rev. H. G. O. Dwight in Armenia : including a journey through Asia Minor, and into Georgia and Persia, with a visit to the Nestorian and Chaldean Christians of Oormiah and Salmas

Reblogged this on haykantonyan3's Blog.