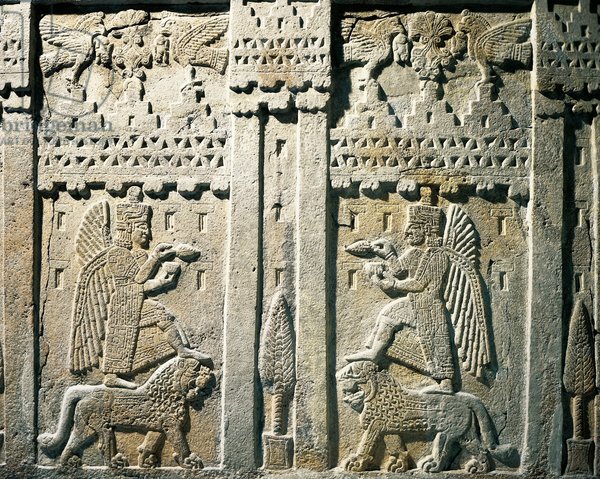 Urartu was an Iron Age Armenian kingdom famed for one of the finest examples of ancient art. Urartu at its zenith had a profound cultural influence on its neighbors reaching as far as Asia and Europe. Supported by discoveries of Urartian artifacts inside Etruscan burials, it has been hypothesized that much of Etruscan culture has its origins in Urartu. [1] [2] Observations by Boris Piotrovsky suggest that decoration and production techniques of Scythian belts and scabbards were borrowed from Urartu. [3] The Urartian way of decorating cauldrons spread over the ancient world, and it is believed that Armenian art is based on the Urartian traditions. [4] [5]

That historic Armenian kingdom was in fact a continuation of the kingdom of Urartu also known as “Kingdom of Van” is apparent from ancient records. In the trilingual Behistun inscription, carved in 521 BC by the order of Darius the Great of Persia, the country referred to as Urartu in Assyrian is called Arminiya in Old Persian and Harminuia in Elamite. Armenia, Urartu, (Biblical) Ararat and Herminuia are therefore synonyms. Ancient people of the region did not distinguish Armenia from Urartu. Some modern scholars however proposed that Urartu fell to a Median invasion and was later replaced by Armenians. The evidence, however, for the so called “fall of Urartu” is absent. There are no records of invading Armenians.

Urartu in fact maintained its independence and power, going through a mere dynastic change, as a local Armenian dynasty (later to be called the Orontids) came to power. Ancient sources support this explanation: Xenophon, for example, states that Armenia, ruled by an Orontid king, was not conquered until the reign of Median king Astyages (585– 550 BC) – long after Median invasion of the late 7th century BC. [6]

“In ancient times Greater Armenia ruled the whole of Asia, after it broke up the empire of the Syrians, but later, in the time of Astyages, it was deprived of that great authority …” [7]

Medieval Armenian chronicles corroborate the Greek sources. In particular, Movses Khorenatsi (5th c. AD) writes that Armenian prince Paruyr Skayordi helped the Median king Cyaxares and his allies conquer Assyria, for which Cyaxares recognized him as the king of Armenia, while Media conquered Armenia only much later—under Astyages. [8]

The name “Urartu” was simply stopped being used when the Persians stopped making trilingual and bilingual inscriptions and dropped Assyro-Babylonian altogether.

Genetic evidence too shows that Armenians are native to the lands inhabited by Urartians. After elaborate research prof Dr. Richard Villems and colleagues of the University of Tartu (Faculty of biology and geography Institute of molecular and cell biology) have concluded in 2004:

“In our study the ancestry of the Armenians was traced back to different parts of Armenia, Georgia, Azerbaijan and Turkey, illustrating the fact that historic Armenia was a much larger territory than that of the present Republic of Armenia”.

Litvinov S. and colleagues have also noted in a paper from 2008:

“Armenians are a separate ethnic group, which originated from Neolithic tribes of the Armenian Uplands” [10]

“The Armenians are a nation and an ethnic group originating from the Caucasus and eastern Anatolia, where a large concentration of this community has remained, especially in Armenia.” [11]

Other recent genetic studies have revealed Armenian continuity for over 5000 years.

Another new study researching ancient maternal DNA from skeletal remains excavated in Armenia and Artsakh found strong matches with the DNA of modern Armenians and confirms Armenian continuity on the Armenian Highlands for at least 8000 years.

“We analyzed many ancient and modern mitochondrial genomes in parts of the South Caucasus and found genetic continuity for at least 8,000 years,”

The language of Urartu

However the most frequently cited argument against the Urartu-Armenian connection is linguistics. Some argue that people of Urartu did not speak an Armenian language, rather they supposed Urartians spoke a language related to Northeast-Caucasian languages. This hypothesis was first proposed by Igor M. Diakonoff who was instructed on the matter by Sergei Anatolyevich Starostin. Starostin’s theories have met considerable skepticism and his Altaic theory is controversial to say the least. Starostin has embarked on a journey to connect as many ancient languages as he can to North-Caucasian. Including Yeniseian, Altaic, Tibetan, Japanese and Austric. Urartian and its older relative Hurrian he also wrongly connected to North-Caucasian. This theory however is not generally accepted in the academic circles. Moreover both Diakonoff and Starostin were not versed in Armenian making their judgment on Hurro-Urartian a difficult task. As the Cambridge University encyclopedia of ancient languages describes:

“A genetic relation between (reconstructed) Proto-Urarto-Hurrian and (reconstructed) Northeast Caucasian has been argued for, but it is not generally accepted. If the connection could be demonstrated, it would be a rather distant one.” [12] 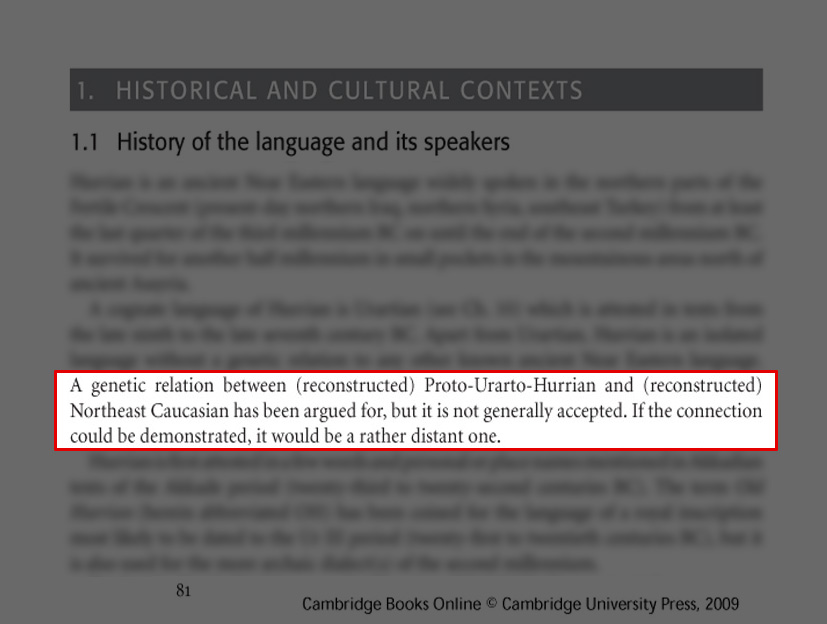 The Urartian scribes seemed to have been utilizing various alphabets, including native hieroglyphs. The most comprehensive studies have shown affinity to the Armenian language.

According to the German Orientalist A. D. Mordtmann, Urartian language was specifically Armenian, and it was only necessary to turn to an Armenian dictionary to discover the meaning of every word in the inscriptions. Dr. Mordtmann deciphered Urartian cuneiform inscriptions which in his words were written in one of early Armenian dialects. He also deciphered some Mesopotamian inscriptions using Armenian. [13]

The Armenian scholar S. Ayvazyan has also demonstrated in his extensive work (Urartian-Armenian lexicon and comparative – historical grammar”, 2011) that Armenian and Urartian languages are very much related. He summarizes by saying:

The examination of these points unequivocally brings us to the following conclusion: …The above mentioned facts prove that the larger part of the lexicon – the most frequently occurring, which forms the basis of the Urartian inscriptions – has its parallels in Armenian.

Bearing in mind that the Armenian-Urartian parallel word(root)s are (1) ubiquitous, (2) present in all groups of the identified lexicon, and (3) mostly native Armenian words, we can without doubt claim that the language preserved in the Urartian texts (which in scholarly literature is known as Urartian) is cognate to Armenian or is the early stage of it.” [14]

And thus, from linguistic, genetic, geographic, historic and cultural perspectives we can safely say that Armenia alone is the true heir of Urartu. With its art and sophistication admired by cultures of the past and present. Armenian national art still bears the cultural torch lid by the ancestors inhabiting of the Armenian Highlands.

Images from the Armenian kingdom of Urartu:

[…] The trove included ancient Sumerian, Persian, Assyrian and most of all Armenian antiquities of the Urartian era (Kingdom of Van). The artifacts dated to as early as 900 BC., included a helmet, small bells […]

Urartu is not a nation, merely a name for locality given by Assyrians. The residents/inhabitants of Urartu were only Armenians, as Hurrians were the ancient ancestors of Armenians. Armenians and Assyrians always lived side by side, and rivaled for power domination. Surroundings of Van was always populated by none other than Armenians. In close localities the Kurds inhabited the southeastern parts of the Van. Xenophon called Kurds Corduchis or corduene, when his soldiers struggled to cross through land of corduchis, then reached the Armenian villages and rested ate with Armenians in 450 B.C. as Xenophon added, the Armenians gave them… Read more »

I agree on much of what you said, but don’t forget that Kurds are relatively modern ethnicity. The ethnonym for Kurd however might have had some ancient roots, but it was a term used for a certain lifestyle, namely nomadic lifestyle of Iranic and Anatolian people. Later it developed into a separate ethnicity. But it wasn’t an ethnic group that long ago. The word Kurd was first written in sources in the form of Kurt(kwrt-) in the Middle Persian treatise (Karnamak Ardashir Papakan and the Matadakan i Hazar Dastan), used to describe a social group or tribes that existed before… Read more »

[…] the remains of what is believed to be a 3,000-year-old castle from the Armenian kingdom of Urartu (Ararat) submerged underwater in Lake Van. The underwater excavations were led by Van Yüzüncü Yıl […]