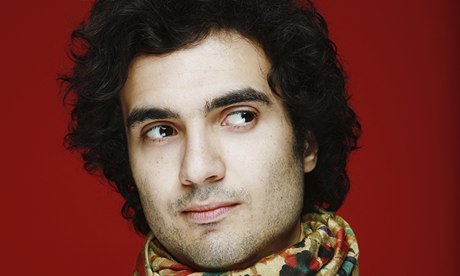 He’s the hottest pianist in jazz and he likes to mix things up, whether it’s bebop, thrash metal or dubstep. But his heart is in the folk music of his native land.

Somewhere, there’s home-movie footage of a three-year-old Tigran Hamasyan at his childhood home in rural Armenia. He is listening to Black Sabbath’s Paranoid and freaking out on a toy guitar. “That was my childhood ambition,” he laughs. “Still, to this day, if I could become a killer guitar player in a couple of years, I’d quit playing the piano and start learning now. I’d love to front a thrash metal band!”

Thankfully, thrash metal’s loss has been jazz’s gain. At the age of 26, this tiny, impish Armenian-American is the hottest pianist in jazz, selling out arenas and earning fervent praise from the likes of Chick Corea, Brad Mehldau and Herbie Hancock (the latter declared: “Tigran, you are my teacher now!”). But Hamasyan isn’t even sure if he makes jazz music. “I suppose it’s jazz in the sense that I’m improvising,” he says. “But the language I try to use when I’m improvising is not bebop but Armenian folk music.”

Hamasyan has an omnivorous musical diet. He devours traditional songs from Armenia, Scandinavia and India, and has studied classical music to a high level (he has suggested a budding jazz pianist would be better off playing Bach or Chopin than studying bebop), while his iPod playlist is that of the twentysomething hipster – J Dilla, Flying Lotus, Radiohead, Sigur Rós, Skrillex and a heavy dose of thrash metal.

But the music he makes doesn’t really sound like any of the above. We meet after he’s played to a sold-out 2,000-seat theatre in Toulouse, where his 90-minute set lurches from delicate, impressionistic versions of eastern orthodox hymns to bursts of electronica; from Keith Jarrett-like meditations to full-on jazz-rock.

“I get into different types of music and really immerse myself in each one and then move on,” he says. “But I try to retain that intensity whenever I revisit any particular music.” In the past 18 months alone he has collaborated with Indian percussionist Trilok Gurtu, Tunisian oud player Dhafer Youssef, dubstep collective LV, oddball hip-hop producer Prefuse 73, along with fellow Armenian-American Serj Tankian from prog-metal outfit System of a Down.

Hamasyan was born in Gyumri, near Armenia’s border with Turkey. Neither of his parents were musicians (his father was a jeweller, his mother a clothes designer), and he grew up listening to his father’s heavy rock collection – Led Zeppelin, Black Sabbath, Deep Purple and Queen. By three, he was picking out pop melodies on the family piano; from six he attended a specialist music school. “We can be grateful to the old Soviet Union that we had classical education systems in place,” he says. “Everybody had a piano in their house, whether they were musicians or not.” By the age of nine he began to immerse himself in jazz, and even guested as a singer with a local big band (“I was this weird, talented kid who sang a couple of standards and a Beatles song, Oh Darling”).

As a young teenager, he moved on from bebop to experiment with Armenian folk music. “My idea was to try to weave these folk melodies into jazz improvisations,” he says. “My first attempts were terrible! The challenge is that folk music is modal, with no chord changes. So you are trying to find harmonies for a music that’s not supposed to have harmonies. That’s tough.” Few Armenian jazz musicians had tried this; instead Tigran was inspired by classical composers Avet Terterian and Arno Babajanian, who “took Armenian folk music into insane territory”.

At 16, he left to study in California (“there are probably more Armenians there than in Armenia,” he jokes), where he has lived ever since. He quickly made connections on the LA jazz scene, recording his first album when he was only 18. His fifth and latest, Shadow Theatre, features a varied lineup, mixing Hamasyan’s piano and wordless vocals with touches of baroque, jazz-rock and electronica. One Armenian folk song (Drip) is transformed into juddering dubstep, another (Pagan Lullaby) resembles Sigur Rós. But, if the settings are expansive, the melodies are simple and direct.

“I’ve been stripping away layers of complexity with each album,” he says. “You can play a bunch of fast stuff or write a complicated melody, but the musical part of that is to make it flow naturally.” He will often do that by singing along with himself as he solos, in the style of Keith Jarrett or Glenn Gould. “Singing along can help to make your improvisation sound natural,” he says. Sometimes you can hear him beatboxing while he plays, or singing rhythmic patterns in the style of an Indian tabla player. He will often deliberately restrict himself to a small range, soloing within the space of a single octave. “When I solo I tend not to think of myself as a pianist. In my head, I’m playing a violin or a guitar, say. Often it’s all about just finding a sound and sticking in that register.”

Hamasyan has spent much of the past year back in Armenia, which has made him all the more fascinated by its traditional music. “Folk is like the first form of expression. Nowadays, if you’re a musician, you’re supposed to be cool or special or something,” he says. “But, back in the day, everybody was a musician. Every action, every ceremony, was accompanied by music. You watch women churning butter and there’s a folk song that accompanies each movement in that process. You go to parts of rural Armenia and you see people singing and harmonising, spontaneously. It’s amazing, like watching the birth of music itself.”

Shadow Theatre is released on 4 November on Verve. Hamasyan plays Queen Elizabeth Hall, London, on 19 November as part of the London jazz festival.