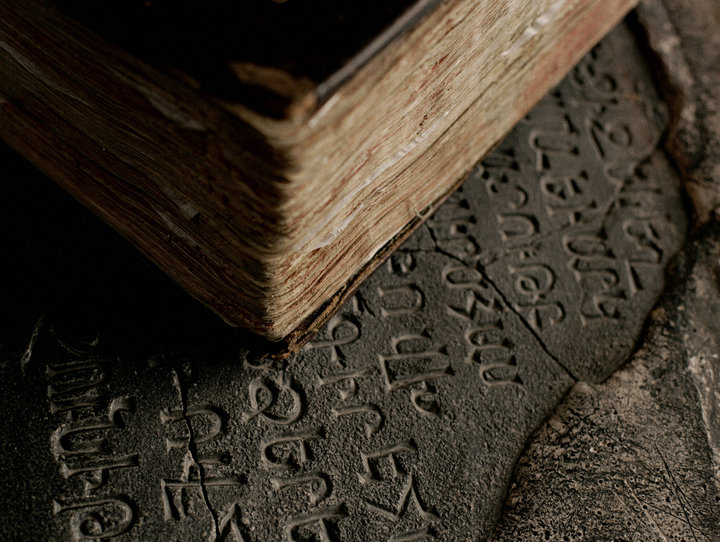 Grogh translates from Armenian as “writer” or “scribe” (sometimes identified with Armenian deity of literature Tir) was a spirit in ancient Armenian mythology.  Grogh was the most punctual writer. As soon as a human was born, Grogh would write the newborn into the book of life, and on the forehead he imprinted the newborn’s fate – chakatagir, predetermining the given lifespan. He keenly observed everyone and entered all the sins and good deeds into his special folio, to read them during the final judgment.

If the agony of dying lasted a long time and the soul could not part with the body easily, it was common to take the pillow from beneath the head of the dying person and open wide all the windows and doors, so Grogh could enter freely into the home and take the soul into his bosom and leave.

Just as the Russians curse ‘k chortu’ meaning ‘to the devil’ and English ‘to hell with you’, Armenians curse by sending to Grogh: “Groghe kez tani!” (meaning “scribe take you!”) or “Groghu tsots” (“in embrace of the scribe”). Many centuries passed and the word “Grogh” became to simply mean ‘writer’.

Really interesting. Already heard and even used this name/word/expression many times without really wondering from where it comes. Thanks for this explanation. Make my day 😛

And thank you for all your wonderful videos on Youtube.
Really great work.

Thank you Vahe for the wonderful comment. New videos are coming soon, work in progress 🙂

[…] deities and spirits of writing and literature. Like the god of literature Tir and the spirit writer Grogh. Armenia’s rich writing tradition is considered one of the major factors behind the survival of […]