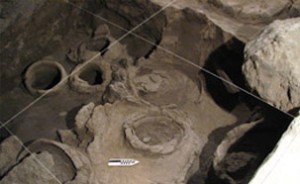 Excavation of a pagan temple complex Ogmik in the village near the town of Amasia, will help to thoroughly examine the pagan Armenian culture, said the head of the group of archaeologists of the Institute of Archeology and Ethnography of the National Academy of Sciences of Armenia, Professor Hayk Hakobyan.

Excavations of the pagan complex began in 1988 and lasted until 1993, by a team of archaeologists led by Hagopian. The work halted in 1993 and was only resumed in 2006 continuing to this day.

“Excavations in the area are of great importance for the evaluation of the ancient pagan life in the country. For a long time it was thought that after the adoption of Christianity, the pagan temples in Armenia have been destroyed, that is not true, “- said Hakobyan to reporters on Monday.

He explained that the results of numerous archaeological excavations, which began in the 50s of the last century show that such temples were not destroyed, and, in addition to Garni temple, the ruins of temples are also preserved in Erebuni, Oshakan and Shirak.

“Best traces of pagan culture of Armenia are preserved in the ancient village of Ogmik where the excavations had revealed a large temple complex in an area of ​​over 10 hectares. To date, we have studied only about 10% of the territory, “- said Hakobyan.

According to the archaeologist, currently in Ogmik they found temples dedicated to gods of the ancient Armenian pagan pantheon, such as Anahit (mother goddess, the goddess of fertility and love) and Aramazd (the supreme god in the pantheon of ancient Armenia, creator of heaven and earth, the god of fertility, the father of the gods ), as well as elements of sacrificial altars, rooms in which are found the remains of sacrificed animals, statues, stones carved with symbols.

Judging by the results of the excavations, the ancient settlement functioned for 400 years or longer from the 2nd century BC until the end of the third century AD, when Christianity in Armenia was adopted as the state religion.

“The excavation will continue, however due to lack of funding, work is going very slowly,” – said Hakobyan.

Armenian paganism – a polytheistic religion of the Armenians is closely connected with the Armenian mythology and prevailed prior to the adoption of Christianity in Greater Armenia in 301 AD.

Pantheon of Armenian gods, that was formed during the early days of proto-Armenian formation, inherited and preserved the essential elements of proto-Indo-European tribes inhabiting the Armenian highlands.

Garni Temple that is preserved in Armenia  is a monument belonging to the era of paganism and Hellenism. It is believed that it was dedicated to the pagan solar deity – Mihr or Mher.

As a result of a major earthquake in 1679, the temple was almost completely destroyed, it was restored in 1966-1976. Outside the temple, the remains of an ancient fortress and royal palace, as well as the bath house, built in the III century, were discovered. The building is comprised of at least five different rooms, four of which were on the sides of the apse. The floors are decorated with Hellenistic mosaics.

Armenia was the first country to adopt Christianity as a state religion in the year 301.