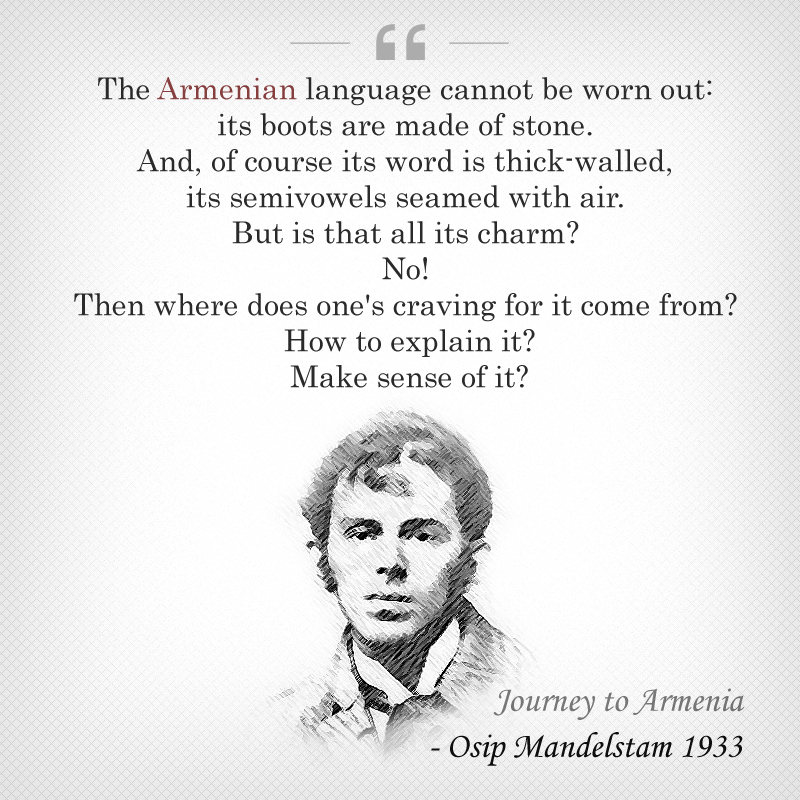 Osip Emilyevich Mandelstam was a Russian poet and essayist who lived in Russia during and after its revolution and the rise of the Soviet Union. He was one of the foremost members of the Acmeist school of poets.

Osip Mandelstam visited Armenia in 1930, and during the eight months of his stay he rediscovered his poetic voice and was inspired to write an experimental meditation on the country and its ancient culture. ‘Armenia brought him back to his true self, a self depending on the “inner ear” which could never play a poet false. There was everything congenial to him in this country of red and ochre landscape, ancient churches, and resonant pottery.’ – Henry Gifford. He was arrested by Joseph Stalin’s government during the repression of the 1930s and sent into internal exile with his wife Nadezhda. Given a reprieve of sorts, they moved to Voronezh in southwestern Russia. In 1938 Mandelstam was arrested again and sentenced to a camp in Siberia. He died that year at a transit camp. Mandelstam’s incomparable apologia for poetic freedom and challenge to the Bolshevik establishment, had close ties to the Journey. His farewell to Armenia is immortalized in one of his famous poems:

I will never see you,
A near-sighted Armenian sky,
And will not squint
Looking at Ararat’s tent,
Nor will I ever open
In the library of clay authors
A hollow book of a wonderful land,
From which the first people learned.

I have been using this wonderful site for several years and I am delighted and amazed at how deeply you have studied each topic, each thought. It is noticeable how persistently you searched and found those important materials, which you have provided and continue to provide with the highest quality. Thank you!