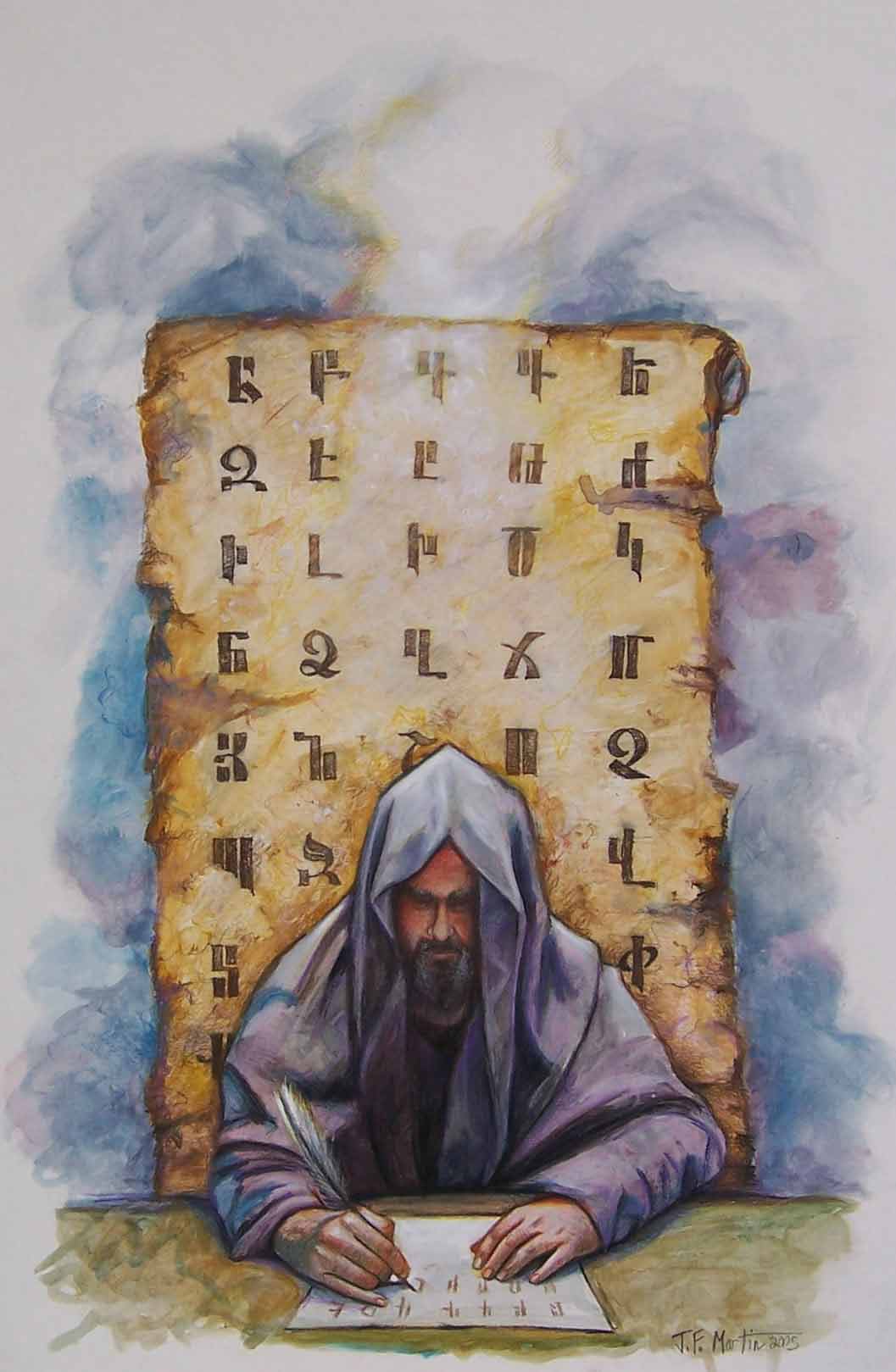 One of the greatest figures in Armenian history, he was born about 361 at Hassik in the Province of Taron; died at Valarsabad, 441. He was the son of Vartan of the family of the Mamikonians. Koryun, his pupil and biographer, tells us that Mesrob received a liberal education, and was versed in the Greek, Syriac, and Persian languages. On account of his piety and learning Mesrob was appointed secretary to King Chosroes III. His duty was to write in Greek, Persian, and Syriac characters the decrees and edicts of the sovereign, for, at this time, the national alphabet was long lost. But Mesrob felt called to a more perfect life. Leaving the court for the service of God, he took Holy orders, and withdrew to a monastery with a few chosen companions. There, says Goriun, he practiced great austerities, enduring hunger and thirst, cold and poverty. He lived on vegetables, wore a hair shirt, slept upon the ground, and often spent whole nights in prayer and the study of the Holy Scripture. This life he continued for a few years, preparing himself for the great work to which Providence was soon to call him. Indeed both Church and State needed his services. Armenia, so long the battle-ground of Romans and Persians, lost its independence in 387, and was divided between the Byzantine Empire and Persia, about four-fifths being given to the latter. Western Armenia was governed by Greek generals, while an Armenian king ruled, but only as feudatory, over Persian Armenia. The Church was naturally influenced by these violent political changes, although the loss of civil independence and the partition of the land could not destroy its organization or subdue its spirit. Persecution only quickened it into greater activity, and had the effect of bringing the clergy, the nobles, and the common people closer together. The principal events of this period are the recovery of the Armenian alphabet, the revision of the liturgy, the creation of an ecclesiastical and national literature, and the readjustment of hierarchical relations. Three men are prominently associated with this stupendous work: Mesrop, Patriarch Isaac, and King Vramshapuh, who succeeded his brother Chosroes III in 394.

The recovery of the alphabet (406) was the revival of Armenian literature, and proved a powerful factor in the upbuilding of the national spirit. “The result of the work of Isaac and Mesrob”, says St. Martin (Histoire du Bas-Empire de Lebeau, V, 320),

“was to separate for ever the Armenians from the other peoples of the East and to strengthen them in the Christian Faith by forbidding or rendering profane all the foreign alphabetic scripts which were employed for transcribing the books of the heathens and of the followers of Zoroaster. To Mesrob we owe the preservation of the language and literature of Armenia; but for his work, the people would have been absorbed by the Persians and Syrians, and would have disappeared like so many nations of the East”.

Anxious that others should profit by his discovery, and encouraged by the patriarch and the king, Mesrob founded numerous schools in different parts of the country, in which the youth were taught the new alphabet. But his activity was not confined to Eastern Armenia. Provided with letters from Isaac he went to Constantinople and obtained from the Emperor Theodosius the Younger permission to preach and teach in his Armenian possessions. He evangelized successively the Georgians, Albanians, and Aghouanghks, adapting his alphabet to their languages, and, wherever he preached the Gospel, he built schools and appointed teachers and priests to continue his work.

Having gathered around him numerous disciples, he sent some to Edessa, Constantinople, Athens, Antioch, Alexandria, and other centers of learning, to study the Greek language and bring back the masterpieces of Greek literature. Many of which only survived in Armenian. The most famous of his pupils were John of Egheghiatz, Joseph of Baghin, Eznik, Koryun, Moses of Chorene, and John Mandakuni. In the midst of his literary labours Mesrob did not neglect the spiritual needs of the people. He revisited the districts he had evangelized in his earlier years, and, after the death of Isaac in 440, looked after the spiritual administration of the patriarchate. He survived his friend and master only six months. The Armenians read his name in the Canon of the Mass, and celebrate his memory on 19 February.

[…] Solomon’s Book of Proverbs is said to be the first sentence to be written down in Armenian by Mashtots after his recovery of the Armenian alphabet. Armenian literary tradition dates back to times […]