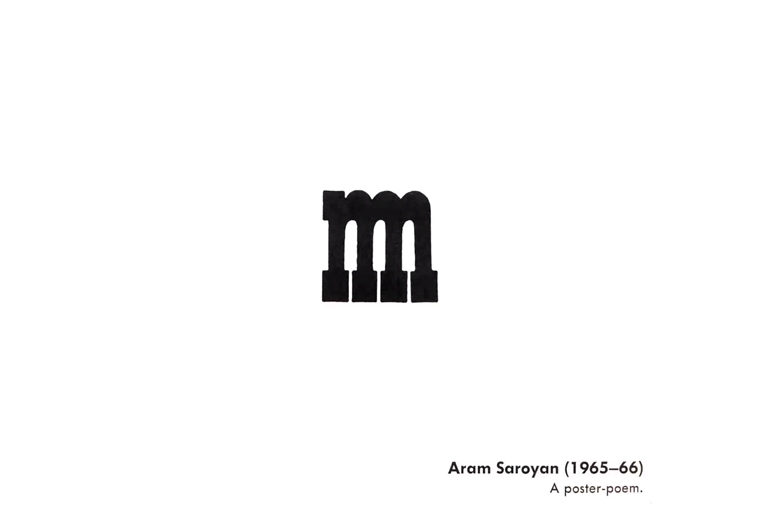 This poem was written by Aram Saroyan, an Armenian-American poet, novelist, biographer, memoirist and playwright. Saroyan’s four-legged “m” has been cited in the Guinness Book of Records as the world’s shortest poem. The meaning of it has been subject to discussion. Some have called it: “a closeup of an alphabet being born” – Bob Grumman. Its sells still in the process of dividing, ‘m’ and the ‘n’, not quit separated. It is also a pun on “I am”, implying the formation of consciousness itself.

Aram Saroyan was also the author of the most controversial poem that simply read: “lighght” in the center of a blank page. This poem was selected by George Plimpton to be featured in The American Literary Anthology and received a $500 cash award from the National Endowment for the Arts, resulting in a huge controversy involving the US government. Read all about the controversy by following the link: How seven letters managed to freak out an entire nation. Recently there has been a resurgence of interest in his work, evidenced by the publication in 2007 of several previous collections reissued together as Complete Minimal Poems.

His father William Saroyan was also a famous author.

Reblogged this on memories of my ghost sista.

Foolish! When did a letter or a symbol become a poem? Such is a sketch, not a poem.

Well it’s a matter of taste off course, but technically a letter can be a poem. Poetry is a form of literary art which uses aesthetic or rhythmic properties of language to mean more than it normally would. Here watch this 🙂 http://www.youtube.com/watch?v=6F7quI-MbzY

Its an emoticon you idiot the ”:P” is a lil face with its tongue out

i tink its dumb indeed

I’ve got his friend, his name is henderson
He’s so alike to a church preacher
I think of him as my best frienderson
Definitely the best english teacher

omg this is genius give this man an award

I had the same thought before I read yours — I.

shortest poem is ur pp