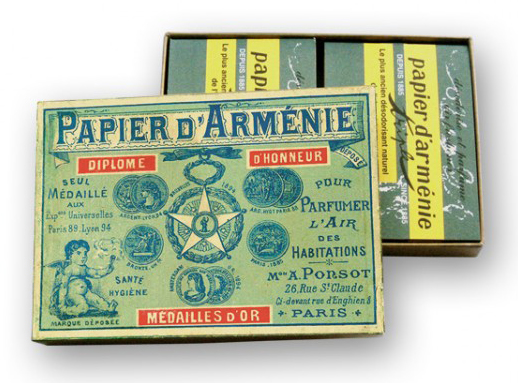 Papier d’Arménie, or Armenian Paper, is a room deodorizer made of sheets of paper, which are coated with the dried sap of styrax trees. At the end of the 19th century, Auguste Ponsot discovered that Armenian households would burn Styrax as a fragrance and disinfectant. M. Ponsot adopted this habit with the help of the pharmacist Henri Rivier, whereby benzoin resin was dissolved in alcohol, then infused onto a blotting paper support. The “alchemy” inherent in Papier d’Arménie became a huge success with the emerging importance of hygiene from 1888–1889, and has been steadily produced in Montrouge, France since 1885.