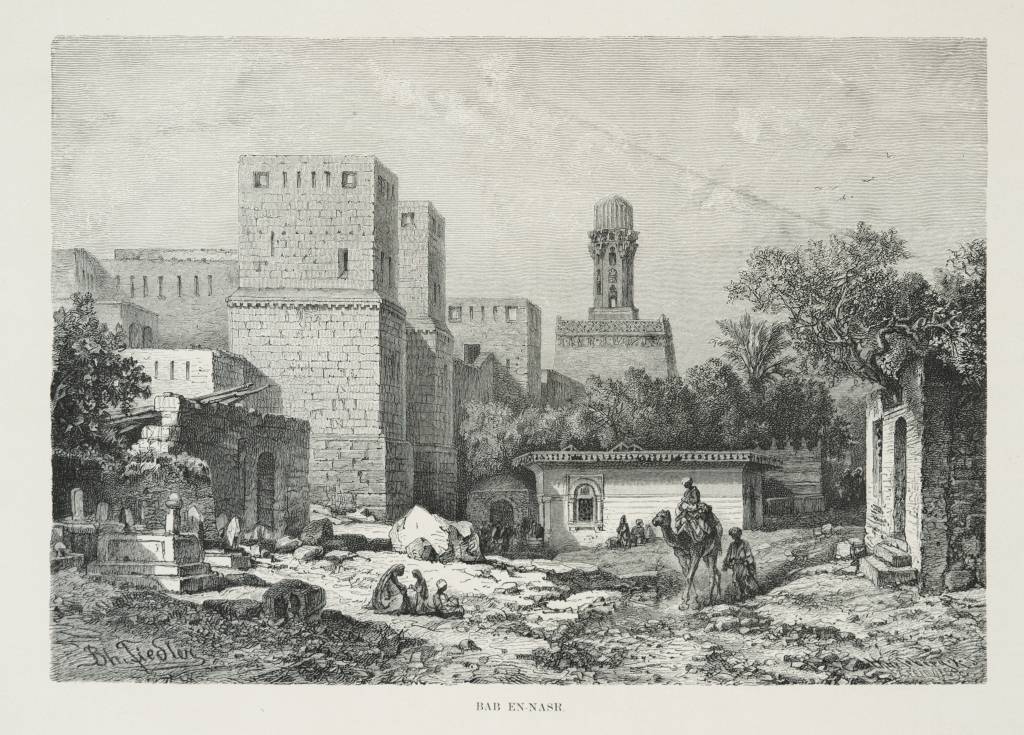 Mamluk meaning “owned”, an Arabic designation for slave soldier, refers to a famous military caste in medieval Egypt that played an instrumental role in the Muslim world. The Mamluk Sultanate famously beat back the Mongols at the Battle of Ain Jalut and fought the Crusaders, effectively driving them out from the Levant by 1291 and officially in 1302 ending the era of the Crusades.

The Armenians made up a significant portion of the Egyptian slave army known as Mamluks, rising to the ranks of prominent leaders in the Muslim world. The Fatimids of Egypt bought among others, many Armenian slaves, who formed the bulk of their military and often their administration [1]. The powerful vizier Badr al-Jamali, for example, was a mamluk of Armenian origin [2]. As were his descendants (Al-Afdal and others).

Badr al-Jamali (1015-1094) was a vizier and prominent statesman for the Fatimids under the Caliphate and Imamate of Al-Mustansir. Ethnically an Armenian, he was purchased by a Syrian emir, Jamal ud-Dawla, for a relatively small price and converted to Islam. Later he joined Mamluks and was appointed as the governor of Acre during his service. He was appointed Commander of the Armies in 1074 and died in 1094, during which he was the de facto ruler of the Fatimid empire, his authority being over everything except the Caliphate [3]. Badr’s army, composed of mainly Armenian soldiers, is believed to have been formed after the fall of the Bagratuni capital, Ani (1066) when waves of Armenian refugees sought shelter in other countries. Badr al-Jamali was the first military man to become the vizier (minister) of the Sword and the Pen, thus setting the trend for a century of mostly Armenian viziers with the same monopoly of civilian and military powers. At the height of their power, the Armenian vizier could count on the personal loyalty of more than 20,000 men. [7]

Badr Al-Jamali built many structures, including:

Another famous Mamluk of Armenian origin was governor of middle Egypt, Tala ibn Ruzzik [4]. Under Ruzzik, Egypt regained international influence, successfully defending itself from naval molestation, raiding opposition shipping in the Eastern Mediterranean. The Crusaders in the Kingdom of Jerusalem were not unaware of his strong position and sought to establish a functional relationship with Ruzzik, culminating with a truce between the two states with Egypt paying large annual sums to Jerusalem as one of the conditions. In 1161, Ruzzik was assassinated and with him died stability in Egypt.

Yet another important Mamluk leader of Armenian origin was Badr al-Din Lu’lu’ (died 1259) [4] He was the first mamluk to transcend servitude and become sultan. Lu’lu’ was an Armenian convert to Islam, in the household of the Zangid ruler Nur al-Din Arslanshah I. Recognized for his abilities as an administrator, he rose to the rank of atabeg and, after 1211, served as regent until the death of the last Zengid, Nasir al-Din Mahmud in 1233. From this time on, he ruled independently. He preserved control of the Jazira through a series of tactical submissions to larger neighboring powers.

During the early years of the Islamic expansion in Syria and Palestine, the Byzantine army commander was an Armenian called Vahan, who had many compatriots among his troops. After the Byzantine defeat these Armenians fell into slavery and became part of the Islamic armies; with the other Christian military slaves they were called rümïs. [7]

That was also the faith of Wardän (Vardan) al-Rämï al-Armanï who was a freedman and flag-bearer (“hämil liwä”) of Amr Ibn al-‘As. He became a close companion of the latter, actively participating in the battles of Alexandria (640-641) and the founding of the city of Futät. Through his eloquence and knowledge of Greek, Wardän famously saved Amr Ibn al-‘As, the commander of the Arab army from a certain death. Wardän is believed to have built the palace of Där al-Nahäs in Fustät. The market in Fustät known as the Vartan Market was named after him.

In Fustät the Armenian mamluks lived in a special sector called Hayy al-Rümï.

Other notable Mamluks of Armenian ancestry include:

Al-Amir Ali Ibn Yahya Abu’l Hassan al-Armani – the governor of Egypt in 841 and 849, appointed by the Abbasid Caliph, the spiritual and political guide and leader of Muslims at Baghdad. The courage of Amir Ali Ibn Yehia, “[who was] versed in the science of war,” is praised by the mediaeval Islamic historian Ibn Taghribirdi. [7]

Al-Afdal, the son of Badr al-Jamali constructed the Palace of Vezirate, or Dar al Wizarra, besides creating two public parks with exotic gardens, and a recreation area with a man-made lake called Birket al Arman, or Armenian Lake. Al-Afdal was nicknamed Jalal al-Islam (“glory of Islam“) and Nasir al-Din (“Protector of the Faith”).  Ibn al-Qalanisi describes him as “a firm believer in the doctrines of Sunnah, upright in conduct, a lover of justice towards both troops and civil population, judicious in counsel and plan, ambitious and resolute, of penetrating knowledge and exquisite tact, of generous nature, accurate in his intuitions, and possessing a sense of justice which preserved him from wrongdoing and led him to shun all tyrannical methods.” He was murdered during Eid ul-Adha in 1121. Ibn al-Qalanisi states that “all eyes wept and all hearts sorrowed for him; time did not produce his like after him, and after his loss the government fell into disrepute.”

Bahram al-Armani – who, after restoring order and peace in the country at the request of Caliph al-Hafiz, was appointed by the latter as the vizier in 1135.

Baha al-Din Karakush – a eunuch and a Mamluk of the Kurdish general Shirkuh who in 1176 constructed a fortress, the Citadel, on the southeastern ridge of the Muqattam Hills and enclosed the new and old capitals, Cairo and Fustat, within a wall protected by the Citadel. Until the middle of the 19th century, the Citadel built by Karakush served as the seat of government fulfilling dual military and political functions.

Amir Suleyman Bey al-Armani – held the position of Governor of Munnifeya and Gharbiyya provinces in 1690 and was so wealthy that he had Mamluks at his service.

Mustafa Jabarti – a Mamluk of Armenian descent was a deputy of the agha or chief of ojak, and amassed a great fortune. He bought properties in the Armenian populated al-Zuwayla quarter and made donations to Armenians through his sister. He also built a hospice on the top floor of the quarter’s St. Sarkis Church, to shelter Armenian immigrants, pilgrims and migrant workers, in need of temporary lodgings.

Muhammad Kehia al-Armani – an incorruptible leader who in 1798 was sent to negotiate with Napoleon Bonaparte in Alexandria to spare the population of Cairo. Napoleon was so impressed by the conciliatory tone, the political astuteness, and the diplomatic skill of the Mamluk of Armenian descent that he later appointed him the Head of Cairo’s Political Affairs Administration.

During the later periods one Mamluk of Armenian descend became known for his service as a devoted personal bodyguard of Bonaparte Napoleon. At thirteen Roustam was kidnapped and sold as a slave in Cairo. The Turks gave him the name Idzhahia. The sheikh of Cairo presented him to General Napoleon Bonaparte in 1798. Roustam became the great emperor’s famous bodyguard, and soon accompanied Napoleon in peace and wars for 14 years. He has been credited with many valors.

Though Roustam lived in a foreign environment, he never forgot his Armenian roots and did everything to help his country. It’s noteworthy mentioning that when the Kingdom of Italy was decomposed by Napoleon’s proclamation in 1810, the Mkhitaryan Union was kept aside. Besides, Roustam asked Napoleon to save the Armenian Church in Russia in 1812. Beside being a mamluk, Rustam was also a great warrior in the French army. He accompanied the emperor in the first/second wars of Austria, Prussia, Poland, Spain, Moscow, Dresden, Italy, Venice, France, Netherlands and was wounded for several times. Roustan married Mademoiselle Douville in Dourdan, France and died on December 7, 1845. Leaving his famous book “Life of Roustam Raza till 1814.”

1 Walker, Paul E. Exploring an Islamic Empire: Fatimid History and its Sources (London, I. B. Tauris, 2002)

7. The Fatimid Armenians: Cultural and Political Interaction in the Near East  By Seta B. Dadoyan, Seda Parsumean-Tatoyean

The origins of the Mamluk system are disputed. Everybody agrees that the story of an entrenched military caste like the mamluks in Islamic societies begins with the Abbasid caliphs of the 9th century Baghdad. The question is more precisely when in the 9th century. The dominant narrative up to the 1990’s was that the earliest mamluks were known as ghilman (another term for slaves, broadly synonymous) and were bought by the Abbasid caliphs, especially al-Mu’tasim (833-842). By the end of the 9th century, these slaves had become the dominant element in the military. Conflict between these ghilman and the population… Read more »