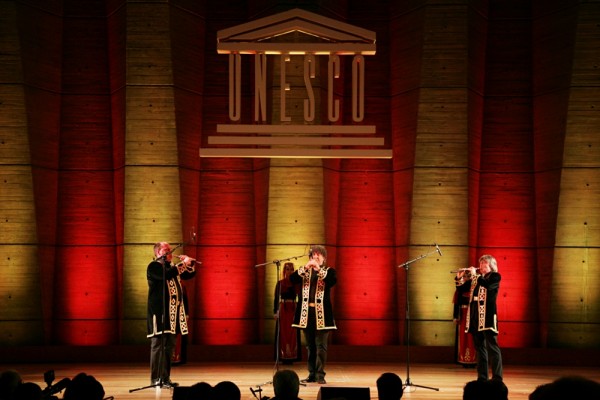 On initiation of group of UNESCO Francophone countries, Armenia, Lithuania and Bulgaria have presented their national cultural values included in the List of the Intangible Cultural Heritage of Humanity during March 18 concert in Great hall of Paris. As Armenpress was informed from press, informational and public relations department of Armenian Foreign Ministry, at the concert Armenia was presented by prominent French-Armenian musician, duduk player Levon Minassian, whose unique performance amazed the audience.

Intangible Heritage provides direct access to living memory, it is a gateway to the identities of the people,” said the Director-General of UNESCO, Irina Bokova, at the evening event on 18 March, which saw a representation of Armenian, Lithuanian and Bulgarian cultural expressions. The event was organized at UNESCO Headquarters to celebrate International Francophonie Day and the tenth anniversary of the UNESCO Convention for the Safeguarding of Intangible Cultural Heritage.

This evening was an initiative of the President of the francophone group to UNESCO, Ambassador Jean-Pierre Blackburn, and Permanent Delegate of Canada.

Musicians and dancers performed masterpieces of the Armenian Duduk, the Bulgarian Bistritsa Babi and the Lithuanian Sutartinės, all of which are inscribed on UNESCO’s Representative List of the Intangible Cultural Heritage, reflecting the wealth of these cultures, their common influences and their interactions, handed down from generation to generation, forging close ties between peoples throughout history.