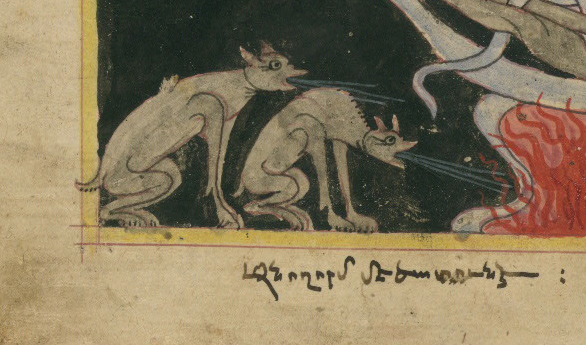 In old Armenian folklore there are many creatures into which humans and evil spirits can transform by free will or curse. Often such tales involve Werewolves, roaming at night, snatching children and causing fear. These creatures are known as “Mardagayl” in Armenian.

Some tales speak of women who, in consequence of deadly sins, are condemned to spend seven years in wolf form. In a typical account, a condemned woman is visited by a wolfskin-toting spirit, who orders her to wear the skin, which causes her to acquire frightful cravings for human flesh soon after. With her better nature overcome, the she-wolf devours each of her own children, then her relatives’ children in order of relationship, and finally the children of strangers. She wanders only at night, with doors and locks springing open at her approach. When morning arrives, she reverts to human form and removes her wolfskin. The transformation is generally said to be involuntary, but there are alternate versions involving voluntary metamorphosis, where the women can transform at will. These werewolves run like the wind and are able to make a journey of many days in just one hour—such that no one can detect their absence from home. A werewolf cannot be killed by a knife or weapon. The only way to save oneself from them is to take and burn the pelt. However, during the day mardagayl hides the skin and it is difficult to find. After seven years, the wolfskin ascends to Heaven on its own accord, and the person returns to being a normal human being. Sometimes, only one trace remains of the prior condition, usually a tail.

Other tales related to werewolves have a mythical character, such as the creation of the Milky Way. A young newly married woman, one Armenian folk story says, had been transformed into a werewolf. Once when washing a guest’s feet, she observed that the feet were very white and tender. She liked this a lot. At night, when everyone was asleep, she put on the wolf’s pelt and came to devour the guest. However, the brave guest stabbed her in the breast with his dagger. Milk squirted from her breast into the sky, and traces of this milk are till now visible as the Milky Way.

In “The Book of Were-Wolves” – 1865, Sabine Baring-Gould describes all sorts of folk-lore related to werewolves. Among other stories he describes an account in Armenia as follows:

That the same belief in lycanthropy exists in Armenia is evident from the following story told by Haxthausen, in his Trans-Caucasia (Leipzig, i. 322): –“A man once saw a wolf, which had carried off a child, dash past him. He pursued it hastily, but was unable to overtake it. At last he came upon the hands and feet of a child, and a little further on he found a cave, in which lay a wolf-skin. This he cast into a fire, and immediately a woman appeared, who howled and tried to rescue the skin from the flames. The man, however, resisted, and, as soon as the hide was consumed, the woman had vanished in the smoke.”

The Book of Were-Wolves (1865) Sabine Baring-Gould

The Wolf and Wolf-binding Spells

The wolf occupies a prominent position in Armenian folklore and, in spells, it figures higher than all the various night evils embodied by snakes, scorpions, frogs, etc. The wolf often appears as a dev (evil spirit) and is equated with evil spirits which take human form. One tale says that “The wolf eats evil beings, otherwise those evil ones would destroy the world. But each year every evil spirit devours a wolf and thereby reduces the number of wolves in the world. Otherwise they could not save themselves from all the wolves”

Sometimes the wolf-demon has a bipedal form. Therefore spells against wolves will them to be bound by their two big toes and eight other toes. Resembling humanlike devs, the wolf’s toes point backwards and its heels are forward. Lightning which can destroy all devs also can destroy wolves. Therefore symbols of lightning such as flint and steel, especially when they produce sparks, are a defense against wolves. Flint itself is also called “kaylxaz” (that which tears up or burns a wolf). Prayer charms against wolves are called wolf-binding (kaylakap) prayers.

The Fables of Mkhitar Gosh (New York, 1987), translated with an introduction by R. Bedrosian, edited by Elise Antreassian and illustrated by Anahid Janjigian

You have experience? 😉 I thought only vamps died from silver bullets 🙂

Cause I’m from family Ar 😉 Not only 🙂