ENIGMA OF THE ARMENIAN ALPHABET: Letters, Protons and Paradoxes 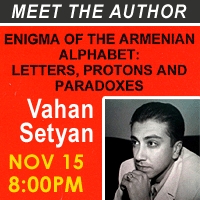 The Armenian alphabet reveals the atomic numbers of some metal elements. This work embarks on a preliminary logical and historical analysis of the numerical values of the alphabet and their predictions of the proton count of some metals within the periodic table. Considering the apparent precision of the associations, one may ask whether the Armenian alphabet – a group of symbols that resurfaced again after the complete destruction of Armenian literature by the onslaught of Christianity in the Western world- contains a larger realm of information than the eye may initially see. The attempt to answer this question is less trivial than one may think and more paradoxical than one may imagine.

VAHAN SETYAN arrived to the United States in 1988. After completing his undergraduate degree in 2002, he continued in pursuing a graduate and doctoral degree in Industrial and Organizational Psychology. This provided the opportunity to examine contemporary organizations and ancient civilizations, further examining the aspects of altruistic behaviors and how they are perceived and utilized. This opened the door to further examine ancient mythologies and civilizations from the end of the Last Ice age to the fall of the Roman Empire and with it, allowed him to understand the hidden, neglected and forgotten history of the Armenian people. All of his examinations are primarily based on logical and evidential perspectives, attempting to understand the natural explanations of human history. Setyan has been on numerous TV interviews and video conferences, speaking about the historicity of the Armenian people. He is the author of various published articles and is currently working on the release of his second publication, “The Descendants of the Sun.”

“ Enigma of The Armenian Alphabet”… A DROP OF KNOWLEDGE THAT FALLS EXPANDING ITSELF TO REVEAL THE TRUTH AND THE FACTS THAT HAVE BEEN BURIED FOR MANY THOUSAND YEARS BY THE HANDS OF POLITICAL CRIMINALS EACH IN ITS OWN ERA. IDIOT-PROOF… This unscholarly and crude description gives me a mental relief when used at times, as a description in its absolute form. Anyone feeling discriminated by my use of the above statement, is welcome to feel devastated, by which it will only verify itself as an idiot and not by my accusation since not knowing how many idiots are there… Read more »