Long before Baron Pierre de Coubertin, after a nearly 1200-year hiatus, organized the Modern Olympics of “Athens 1896,” the Ancient Olympics that began in 776 B.C. honored countless athletes every four years, including some famous Armenians.

Among them, Prince Varazdat Arshakuni (Վարազդատ in Armenian; Latinized as Varasdates), later King of Armenia, was the last known recorded Ancient Olympic victor who won the boxing event at the 291st Olympiad (in 360 A.D.). A memorial plate, now in display at the Olympic Museum in Olympia, Greece, details his win as the most honored champion of the 291st Olympiad. At the 265th Olympiad, 79 years earlier (281 A.D.), another of the famous non-Greek winners (in wrestling) was the Armenian King Trdat III (286-342 A.D), who in 301 A.D. adopted Christianity as the state religion, making Armenia the first Christian nation. The exploits of both kings were chronicled by the Armenian Historian Movses Khorenatsi (Moses of Khoren) in his History of Armenia.

The end of the Ancient Olympics came in 393 A.D., when the Roman Emperor Theodosius I, a convert to Christianity, legally abolished the games as an old “pagan” religious rite. In 1998, the International Olympic Academy installed in Olympia a marble bust by sculptor Levon Tokmajyan, honoring the Armenian King Varazdat Arshakuni (360 A.D.). 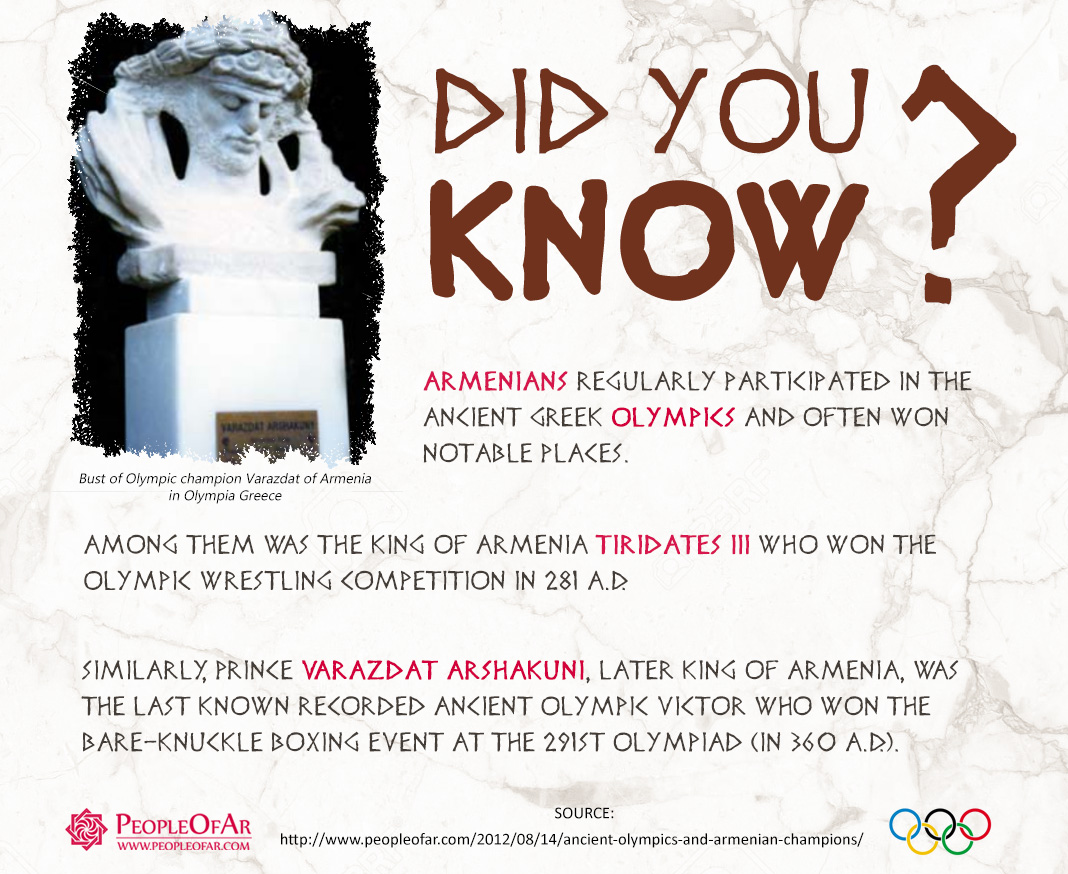 […] The national Armenian wrestling style “Kokh” [1] is considered one of the oldest forms of wrestling.[2]  Its ancient history is attested by numerous travelers to Armenia. Persians came in contact with Kokh early on through contact with Armenians. During the middle ages the French investigator Henry Chardin also wrote about Kokh. Illustrations of Kokh, can equally be observed on the walls of the medieval Armenian Cathedral of Akhdamar (915 AD). Armenian wrestling was famed in the ancient world. The Armenian King Tiridates III (250-330 AD) himself at the 265th Olympiad (281 AD) became an Olympic Champion in wrestling[3]. […]

Did You Know? - Armenians in the ancient Olympics - PeopleOfAr