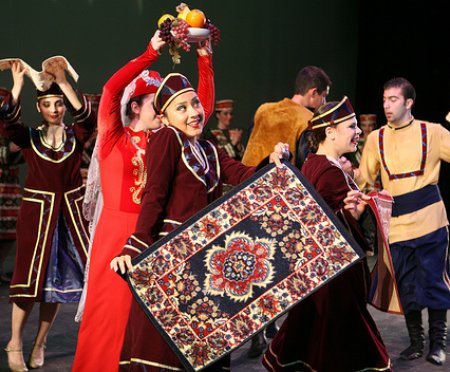 The holiday of Navasard celebrated on 11 August is an ancient Armenian New Year, symboling Hayk Nahapet’s (the legendary patriarch of the Armenian people) victory over the Babylonian tyrant Bel. According to  legend, about 4,500 years ago Hayk Nahapet defeated Bel’s army, which marked the dawn of the Armenian Republic. The word itself is translate as nava — new and sard — year. It became one of the favorite pre-Christian holidays of the Armenian people. On that day festivities were held throughout the Armenian territory — the whole royal court as well as the soldiers and ordinary people celebrated the holiday. This holiday was devoted to the pagan gods. People believed that gods came down to earth and bathed in the Aratsani river and then went up to the heaven and from there participated in the holiday of Navasard. It was common on Navasard that an ox was sacrificed to the gods, and its blood was used to mark the foreheads of the holiday participants. According to tales, on that day the tables could even collapse under the weight of various dishes, sweets and dried fruit. Royal hunting and horse racing were important events during Navasard. Today Navasard is celebrated by various groups of people in Armenia and diaspora. Modern ethnographers have more than once appealed to higher bodies requesting to make Navasard an official holiday.

As for me, I’m having a nice big glass of red wine 😀 Happy New Year !