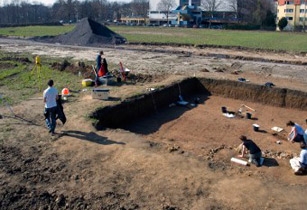 YEREVAN, JULY 26, ARMENPRESS: Armenian expedition group has discovered a monument in the course of the  excavations carried  in Armavir province,  Republic of Armenia. As the Archeology and Ethnography Institute, National Academy of Sciences ,  fellow scientist, expedition leader Boris Gasparyan believes the monument probably dates to Paleolithic  era, over 250.000 – 300.000 years. “The monument discovered by our efforts, has not yet been definitively dated” the interlocutor noted.

According to Gasparyan lately, the  Armenian expedition has carried out more research- investigation works than main excavation, Armenpress reports.

The archeologist informs Armenian –German joint expedition is scheduled to commission excavations in August 2012 in Sisian to find out whether the process of Neanderthal man transformation into Homo sapiens , that’s to say into a modern men has occurred in the area of Armenia.

“Each launched excavation has a special purpose, yet the issue of protection of discovered samples and monuments also stems from it. The researches carried out abroad as well as numbering analysis cost a lot” Gasparyan concluded.

Paleolithic Monument discovered in Armenia | Notes of a Spurkahye