Another talented painter worthy of mentioning is Ariel Agemian. He created imo. the most beautiful face of Christ (see below).

A little info about the artist:

Armenian artist, Ariel (Haroutin) Agemian is an artist-writer with the dual expression of idealist and materialistic art. He was always the artist who demonstrated the myriad of experiences and appearances in the existence of life. Ariel was born in Brussa, Turkey. At the age of five he witnessed the Massacre of Armenians and the death of his father. He was then separated from his mother and brother and taken by the Mekhitarist Monks to Rome and soon onto Venice where he was educated until he was 18 years old.  He received the degree of “Maestro d’Arte and a full professorship in art from the Academie of Fine Arts in Venice and a doctorate in Philosophy from the University of Padua, Italy.  In 1937 he came to America. Agemian was a representative of the school of academic realism and a skillful master of composition. During his artistic career in Europe he received two Gold Medals in art, from the “Association Artistiques” in Venice and  the “Artistes Critiques” in Paris. He has painted national themes reflecting the ancient as well as the contemporary history of the Armenian people. Agemian was also a portraitist and a landscapist. He has painted murals with spiritual as well as secular themes. They can be found in Armenian and Eastern Rite Catholic Churches in France, Italy, Turkey, and in America in Belmont,  Roxbury and Indian Orchard Massachusetts, and Philadelphia and Wynnewood Pennsylvania.  In addition to those works, there are paintings in the Mekhitarist College in Venice, the Monastery on the Island of San Lazzaro and also several homes of friends in the USA.

His reproduction of Christ from The Shroud of Turin, is considered the most exact by experts in the scientific research field. 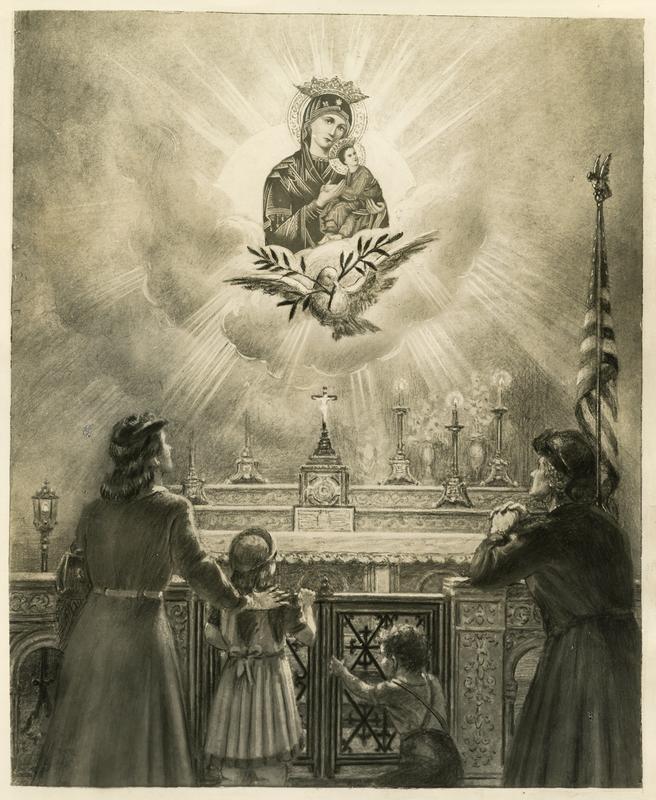 you can find more examples and info on this website: http://www.agemianpaintings.com/index.html

Thank you for sharing some of my father’s art on your site.
annig agemian raley

I didn’t expect you visiting 🙂 But you shouldn’t thank me really I thank your father for the amazing art he made and thank you for allowing me to share it and some of his turbulent biography. Come to think of it, i forgot to put a link to your website where I found your fathers creations. Thanks again for stopping by. Take care.

How can I send you the final drawing of the Unfinished Blessed Mother, by Ariel Agemian, 1963. So you can post it.

The last painting on this site, the veiled girl, holding a book w as not done by my father but by a Dutch painter.
Thank you for your attention to correct this.

I see the painting of the girl by the Dutch painter (the one Annig mentioned back in 2015) is still listed as being done by Mr. Agemian. Oops. 😉

I wish I could find more of Mr. Agemian’s work. I did have a lot saved but can’t find it now. Good thing I have so many of the exquisite little devotional books he illustrated for the Confraternity of the Precious Blood. Including some that are out of print. 🙂

I have the Finished Version of the Unfinished Blessed Mother, by Ariel Agemian, 1963 hanging in my living room. My mother was the model for your father she also taught your brother religious instructions. I believe I sent you photos a few years back. If you would like I can send you pictures again.

Ed you can send me to peopleofar@hotmail.com much appreciated, thanks!

That would be great!
I do remember your mother.

Please do send the finished version of the unfinished Blessed Mother. I will include it on the new website, agemianpaintings.com.
Thank you

[…] there is much more in this posting. It is a wonderful sampling of Agemian’s religious and non-religious art. There is another […]

I am pleased to see the many works done by my father, Ariel Agemian. In fact, you have copies of works which we do not have a record of and I would like to add those that are on this site to his website. Can you help me? Where did you find some of these portraits?
Thank you,
annig agemian raley

Sure, all the pictures here I found on the internet by searching for Ariel Agemian in google pictures. You can save pictures from this blog by clicking the right button and then “save as.” They are all original size (I did not re-size them). There are quit a lot of people who have pictures of your fathers paintings, I’m sure you can find more by googling.

I am in constant awe of Ariels work I have come to know His work through a spiritual master piece by Thomas Kempis my imatation of Christ. The art work in it was spell binding,uplifting and a powerful aid and very comforting. Ariels work in that prayer book is astonishing, deeply beautiful,consoling, inspiring and engaging to an artists eye. I have been meaning to find out more about him on line, as an artist myself I have found great inspiration in the religious pictures he done in the thomas akempis prayer book. Its awesome to see the other amazing spell… Read more »

Yes! I am pleased to share as his daughter that my father was a very religious devout man dedicated to loving Christ thru his art. I appreciate your words.

Agemian’s every single religious work is his prayer to his Lord, prayers he learnt to pray at an early age on the island of San Lazzaro, in Venice.

His male or female portraits are the mirror panes of the vivid inner souls of his subjcets.

Yet, his nudes are strikingly provocative as pagan saturnalias.

I love to read about his life. How did this man die? Will you think of writing a book about him? His artwork is the most inspirational work I’ve ever seen.

1963-2013 marks the fiftieth anniversary of Ariel Agemian’s passing.
It would be most appropriate to celebrate this occasion by organizing a retrospective of his works and a respectable volume with an indepth research of his art.

Agemian should have his museum in Yerevan …
To keep at home is unfair …
People should see his art …
Agemian’s paintings have saintfulness…
Something sacred…
Them… touched my heart and soul …
Dr. Sylva Portoian

[…] Agemian got out, and was raised in the Armenian community in Italy. He ended up also working in places like France […]