One of my favorite Armenian artists whom I (regrettably) only recently discovered is Valentin Podpomogov. I would like to share some of his artwork with you. But first a little introduction. 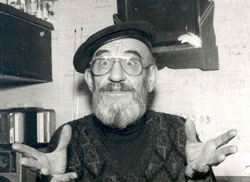 Valentin Podpomogov was born and raised in Yerevan, Armenia in 1924. He is considered one of the prominent painters of the Armenian historic genre. In 1940, at the age of 16 he was already working as an illustrator for film studios. In 1959 he was accepted as a full member of the USSR painter’s union. He considers himself to be a refined Armenian.  People in Yerevan say about him:  “those who don’t know Podpomogov, don’t know Armenia”. Podpomogov says:  “…My works are first of all dedicated to the rebirth of Armenian people from the death of the Genocide…” Podpomogov was deeply affected by the Armenian Genocide of 1915. He dedicated several pictures to this tragedy. The most monumental of these is the huge canvas named “Requiem” (see below). He also dedicated a number of his painting to the tragedy of the Sumgait and Karabakh pogroms, committed by the Azerbaijani government after the fall of the Soviet Union. Podpomogov’s pictures are usually a protest against injustice in all its manifestations. Such is his piece titled “Struggle” where nature is depicted as being crucified on the Crucifix of Civilization made of concrete. Podpomogov’s paintings have the ability to stimulate thoughts, but he is much more than just a painter. He contrives to be all at once: designer, film art-director, sculptor, architect, and finally a painter. And as surprising as it is, all of it despite the fact that he never obtained any relevant education. “Life thought him”, he would say. He is known to those who are close to him as a jovial person always making people laugh, even when he was hospitalized. It is said that whenever Podpomogov was put in hospital it became a party for the whole staff. Below a few examples of his master pieces.

You can find more on his official site: http://www.podpomogov.am/index_eng.htm

Nice art collection, he has some really striking pieces.