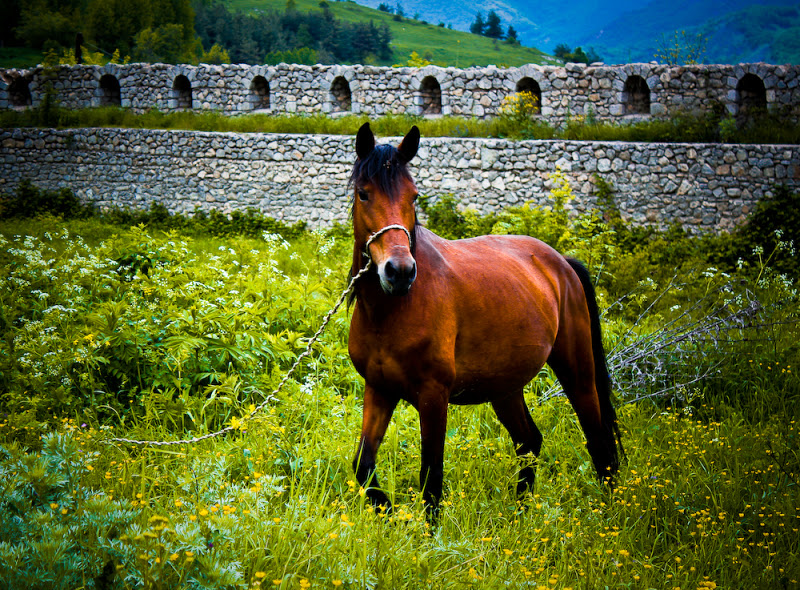 As I wrote in a previous post Armenia Land of the Horse, many ancient writers would refer to Armenia as a land of excelent horse mastery. Recently I stumbled upon a few quotes from classical writers attesting to this fact.

This, as well as Armenia, is an exceptionally good “horse-pasturing” country; and a certain meadow there is called “Horse-pasturing,” and those who travel from Persis and Babylon to Caspian Gates pass through it; and in the time of the Persians it is said that fifty thousand mares were pastured in it and that these herds belonged to the kings. As for the Nesaean horses, which the kings used because they were the best and the largest, some writers say that the breed came from here, while others say from Armenia.

There are also other mines, in particular those of sandyx, [Note] as it is called, which is also called “Armenian” color, like chalce. The country is so very good for “horse-pasturing,” not even inferior to Media, that the Nesaean horses, which were used by the Persian kings, are also bred there. The satrap of Armenia used to send to the Persian king twenty thousand foals every year at the time of the Mithracina. Artavasdes (king of the Armenians), at the time when he invaded Media with Antony, showed him, apart from the rest of the cavalry, six thousand horses drawn up in battle array covered with complete armour.

The passion for riding and the care of horses characterize the Thessalians, and are common to Armenians and Medes.

Referring to Xenophon, Anabasis (5th century B.C.) where he describes a following account in a village in Armenia:

Then Xenophon took the village chief back for the time to his own household, and gave him a horse that he had got when it was rather old, to fatten up and sacrifice, for he understood that it was sacred to the Sun-god. He did this out of fear that the horse might die, for it had been injured by the journey; and he took for himself one of the colts and gave his captains also a colt apiece.

I’m so glad no stupid bits are used. Rope Halters are the best for everyone. No painful bits. Bits are a pain causing device. Pain causes discomfort, and horses seek comfort. Problem is that pain causes damage, distrust and problems for both owners and horses.

Great that looking at an ancient painting, the Armenians seem like they actually care and listen to the horse, meaning they learned from the horses response whether their technique helps or not, and using common sense. Though Horses originate from America and evolved, Armenia is the oldest-known civilisation that domesticates them.

Thanks for your kind comments. See this video if you haven’t see already. https://www.youtube.com/watch?v=-9nZU6D-NBg

[…] See more on ancient Armenian horse culture :  Armenia the land of the horse or read the followig two articles: Land of the Horse and Historic quotes about horse-breeding in Armenia […]