For some reason I again return to this subject. I recently found some text from an old German medical book Gart der Gesundheit (Garden of Health, 1470)  describing the healing properties of Armenian earth. Modern medicine has advanced quit a bit since the old days, but I think it is still interesting to read about the “knowledge” of the old. It’s an interesting book about alchemy, various herbs and their peculiar properties. The following is an English translation: 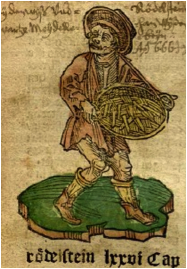 Bolus Armeniaca; Earth from Armenia. It’s a kind of marble that was once highly prized for its fineness. Herbarius in Dyetsche writes “Bolus armeniacus or red soil of Armenia is a kind of earth, it has the power to contract and stop. You have to choose Armenian earth that is totally red. Armenian earth is good against spitting blood thus: Take barley water, disband or dissolve in it the Arabic gum and dragagantum with Armenian soil. The same is also good against redness of the body. If you give it with plantain water or make a plaster on the intestine with the egg white with Armenian soil and seeds of plantain. Against bleeding from the nose, take Armenian earth and the juice of Teesdalia, mix it together and place the mixture in the nose.

From Beverwijck “Bolus Armenia and Sigillum Lemnium (so called because in the old times on the Island of Lemnos the image of the Goddess Diana was printed on that soil) are for valid reasons in Matthiolus in his fifth book on Dioscorides Chapter 73 shown as similar remedies although in the pharmacies they are usually found separately. The Armenian earth cures the bites of snakes and other venomous creatures, helps against plague-like fevers, takes away the venom from poisonous drinks, resists rotting, stops blood spitting, dysentery and galvanization. Not far from the city Vassy in the landscape of Champagne and Cuysel Burgundy there is soil dug from there baring similarities with the Armenian bole. ”

I can speak & read German, in which page of the book did you find this about Armenia?

Could it be that the “red earth from Armenia”- “bolus armeniaca” is red clay? Makes more sense than “marble” or any other rigid material.