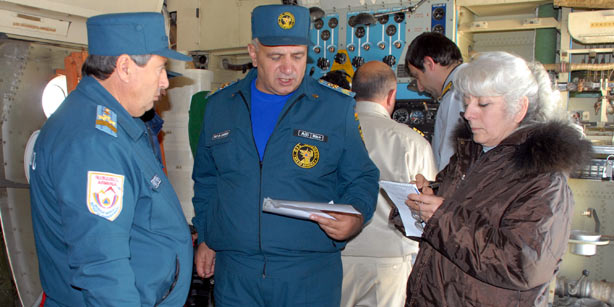 Armenia has sent a plane to Turkey as part of international aid that started pouring into the country since Monday yet it is distant that it could play a role in bringing the two foes together.

The Armenian official said Turkey did not accept food aid but asked for tents, recalling that Armenia also sent aid to Turkey in 1999 earthquake.

He added that Armenia always sent aid and it is the first time that Armenians came to Turkey. “We are ready to offer every kind of support if needed. We would like the two countries to enjoy good relations. This is a humanitarian aid. We are two neighboring countries,” Kostandyan stressed.

Speaking during a visit to Saudi Arabia Embassy in Ankara to express his condolences over the death of Saudi Crown Prince, Foreign Minister Ahmet Davutoğlu said while commenting on aid from Armenia that these tragic days could be seen as a way for reconcilitation among nations and countries. Recalling that Turkey always sent humanitarian aid to other countries regardless of recepient’s religion, ethnicity, sect or political view.

“We always accepted humanitarian aid with gratitude, no matter who sends it,” Davutoğlu said. But Davutoğlu ruled out that aid from Israel and Armenia will play a role in reconciliation with the countries. “Our position is known in political problems,” Davutoğlu underlined.