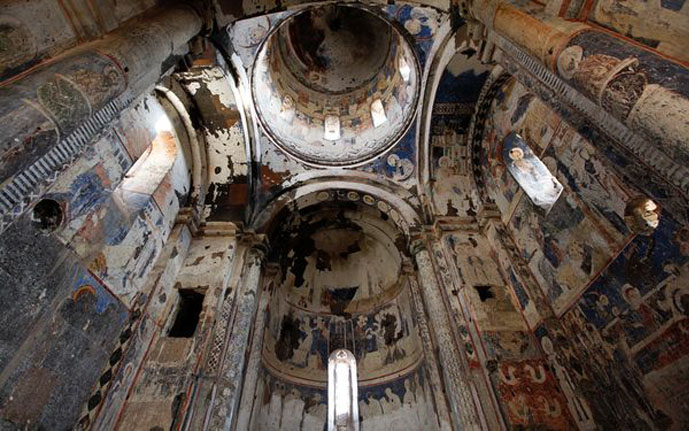 A sad report from National Geographic Daily News published in October 23, 2010, exactly a year from now. Still nothing has changed to improve the situation.

Damaged frescoes in the Church of St. Gregory of Tigran Honents tell a story of neglect in the medieval city of Ani, now part of Turkey.

Sitting in a militarized zone near the current Turkish-Armenian border, the city is one of 12 cultural sites on the verge of collapse, according to a report released this week by the San Francisco, California-based Global Heritage Fund.

Populated by Armenians in the 10th and 11th centuries, Ani holds churches and other buildings that helped inspire the Gothic style across Europe. The city was abandoned in the 14th century, when all Armenians were forced to leave under Turkish rule. Today the unprotected ruins are prone to looting and vandalism.

Similar sites around the world also hold significant archaeological and cultural value but are at risk due to looting, development pressures, unsustainable tourism, insufficient management, and wars or other conflicts, the report says.

“I don’t think they’ll vanish completely. They’ll just be ruins that are far less than they could be,” said Jeff Morgan, the Global Heritage Fund’s executive director. Modest investments could help restore and develop these sites for generations of sustainable tourism, according to the preservation group.